Do Martyrs Get Virgins or Raisins?

RUSH: Fareed Zakaria GPS. On Fareed Zakaria’s Global Positioning Satellite show on CNN, he played a clip of the… I guess there’s a documentary out there called Why They Hate Us.  Who do…? The State Department convened a seminar after 9/11 entitled, “Why Do They Hate Us?”  Meaning the imams, militant Islamists and terrorists: Why do they hate us?  It’s our fault! What have we done to make them mad?  After playing a clip from it, he had an interview with an author and Muslim reformer Irshad Manji.  Irshad Manji.  So Fareed Zakaria addresses the idea that the Koran promises a martyr 72 virgins in the name of Islam.

ZAKARIA: (haltingly) The Koran promises a martyr in the name of Islam, 72 virgins.  Is that true?

MANJI:  Nowhere in the Koran does it promise 72 virgins, 70 virgins, 48 virgins.  What it promises, as far as heaven goes, is something…  The Arabic word for “virgin” has been mistranslated.  The original used that was used in the Koran was the word for raisin, not virgin, in other words, that martyrs would get raisins in heaven, not virgins.

RUSH: Pshew. I’d like to be there when they tell them this.  “Uh, sorry! Not virgins.  You were misinformed.  Here are 73 raisins.”  You envision that?  Now, when I saw this… You know, I don’t just stop here. I just am not wantonly accepting of this stuff.  I actually dug into this.  I found out that it is an ongoing controversy within Islam, the definition of the word that has been translated “virgins” as it’s used by militant Islamists as they recruit.  It is unsettled. 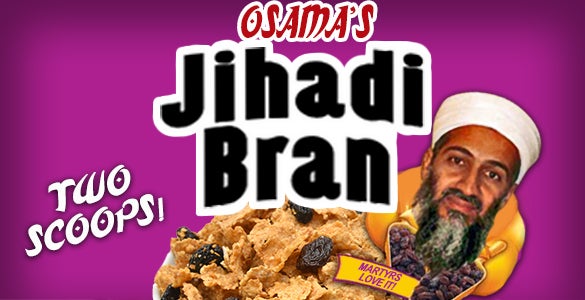 It really is unsettled what it actually means, and there is one interpretation that does mean raisins.  Now, what are raisins? The reason they think “raisins” here is specific.  What are raisins?  Does anybody…? (interruption) You know what a raisin actually is?  It’s a dried grape, dried prune, shriveled up. You gotta think of this in the right way now, Snerdley. Dried up, shriveled up, dried out, worn out. Think of all of the… The opposite of virgin.  So it means grape, raisin, what have you.

So this does mean that the bin Ladens and the other imams and the Ayman al-Zawahiris and so forth are purposely promising virgins when they know it’s raisin.  If we would just treat these guys the way Democrats treat Republicans, we could discredit these people inside of a week.  Can you imagine, say, Hillary Clinton going on TV and just laying into bin Laden for this? “How dare you mislead all these young men, all of these youths, promising them virgins when it’s raisins?”  And then compare it to Republicans, somehow, some way.  We can dream.