Cruzer: Trump Saved Us from Jeb

RUSH: This is Renee in Corpus Christi, Texas.  Renee, you’re first today.  Great to have you on the program.  Hello.

CALLER:  Thank you.  Rush, what an honor.  If I sound nervous, it’s because I am.  You’re such a giant, and thank you for taking my phone call.

RUSH:  You do not sound nervous at all, and I’m very appreciative of your kind words.

CALLER:  Well, thank you so much.  Rush, I’m calling because I am a Hispanic woman, and I just want everyone to know that those polls are totally wrong.  You know, there’s more people — more Hispanic people — that are for Trump for the exact reason that you’re talking about.  They’re tired of the wussies of the GOP not calling Clinton on anything.  For years, they’ve never done that, and Trump is popular exactly for that.  And I hope that all your callers and all your fans that are listening —

CALLER:  — will take that into consideration.

RUSH:  Hang on.  Hang on just…  What polls are you talking about?

CALLER:  People say, “Aw, he’s getting tawdry or whatever.”  Well, you know what?  You were absolutely correct earlier in that.

RUSH: I got confused because you started telling me how much Hispanics like Trump, and I hadn’t seen a poll on that. I’ve seen a poll that Trump’s not doing well with Asians, but I didn’t see anything about Hispanics yet. But you’re saying that it’s good that Trump’s going after the tawdry stuff because he’s the only guy who will; somebody has to and the Republicans haven’t?

CALLER:  That is correct, yes.

CALLER:  Well, I mean, I’m like most people.  To be honest with you, I like Trump.  He wasn’t my first choice. But, I mean, I think he’s the only one that can beat her.  He’s not afraid of, you know, shame.  It’s really true.  And the GOP is.  But if I may, I’d like to make, really, one of the main points that I’ve been wanting to get to you for the last two months.

CALLER:  It’s that people are very disappointed, the people that were for Cruz — of which, I was one of them. My preference was Cruz, but we’ve got Trump; I have no problems with him whatsoever.  But I want to remind everybody, everyone — and I have a lot of friends like myself — that Cruz would never have gotten as far as he did, nor would have Rubio, had Trump not thrown his name into the ring, because we were programmed to vote for Jeb Bush, and Jeb Bush could never have beat Hillary.  But all my friends say the same thing.  Had it not been for Trump, Cruz and Rubio would have not have gotten as far.

RUSH:  Interesting theory.  Let’s stop for a moment and think about this.  There was that PAC. I forget the name of the PAC.  Mike Murphy, GOP consultant, ran the PAC. It raised $115 million for Jeb.  Jeb was… Before this whole thing began, he was the GOP presumptive nominee.  Everybody in the establishment said it was a done deal.  And let’s remember, one of Jeb’s objectives was to win the nomination by losing the base.  Remember that?

What that meant was that the Republican establishment was finally gonna win this nomination and the base of the party was not gonna be happy. They were not gonna have been a factor. That money was gonna be how they were going to do it.  They were going to divide all the conservative opposition to Jeb, making sure that no conservative candidate got anywhere near enough votes to win.  That money was going to be used to promote Jeb and rip into conservatives, and Jeb was gonna be the nominee because of that money.

The old political playbook and rules. 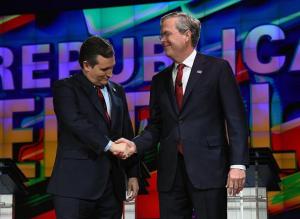 Now, her theory here is that had Trump not entered the race, that’s what would have happened, and that Cruz and Rubio would not have gotten anywhere near as far as they got.  Now, that may be true.  I haven’t heard a whole lot of analysis of that, so I’m pondering this for the first time.  And I gotta be careful.  I don’t want to insult anybody.  She’s a Cruzer, by the way.  You heard her say she’s a Cruz supporter but that she now likes Trump.  But it’s an interesting thing to think about.

Imagine that GOP primary starting last July with no Trump in it and $115 million of Jeb money being spent against Cruz.  The establishment hated Cruz. They despised him. They would have not wreaked as much havoc on Rubio.  Of course, Rubio had to split with Jeb anyway, but they were all factoring Jeb was gonna be the guy.  It didn’t matter whether he was a good candidate or not.  The money was gonna make the difference.  It didn’t matter.

He could be a dryball on the campaign trail. He could be a stiff. He could be exciting. It didn’t matter.  The money was going to make it possible.  And even after Trump got in, they still thought that. They continued to miscalculate.  They thought Trump would implode, Steady Eddie.  Cruz said, “You know what?  I’m not going anywhere near Trump.  If Trump explodes, I want to get his voters, so I’m not gonna rip into him.”  It’s an interesting theory that Cruz and Rubio would not have gotten nearly as far as they did had not it been for Trump.