Sanders Soothes Nerves on The View

RUSH: You know, it’s beginning to dawn on a number of Bernie supporters that the end is near, and they’re having a tough time dealing with it.  One of the people having a tough time dealing with it was Maude Behar over at The View.  So Bernie shows up there today.  The ladies at The View interviewed Senator Sanders.  Maude Behar began by saying, “Nevada’s Democratic Party filed a formal complaint accusing your supporters of inciting actual violence and now we hear permits to demonstrate are being issued in Philadelphia,” which is where the Democrat convention is.

SANDERS:  What I say to that, Joy, is there was no violence in Nevada.  That place was surrounded with police officers.  There was no indication of violence or not one person was touched. You read in the media that chairs were thrown.  You have never seen one video of a chair being thrown.  That’s just not true.  What did take place and which I condemn, people were booing, they were loud, there were some obscenities, that’s true.  But, in fact, there was no violence.  Secretary Clinton and I have different points of view on many of these issues.  I don’t see anything wrong with a vigorous debate.

RUSH:  But Maude is still unsettled.  She’s still nervous because she thinks that Crazy Bernie is gonna end up helping elect Trump.

BEHAR: Twenty percent of your supporters have said they’ll vote for Trump over Clinton.  I mean, you just said he’s a bigot.  What do you — what do you say to that, how does it make you feel that your supporters…

SANDERS: Well what I say to it…

BEHAR: … could make him the next President. 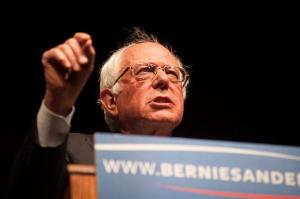 SANDERS: Don’t believe every poll, don’t believe every poll that you see many, many months before a general election. I am a stronger candidate against Trump than Secretary Clinton is, but I will do everything that I can to make certain that Donald Trump is not elected president… (applause starts)

SANDERS: … of the United States.

RUSH:  Bravo, bravo, so the girls, the ladies at The View were consoled, and they were calmed down by, once again, the 74-year-old Bernie Sanders, who saw distress on The View and immediately changed his schedule to go there and assure them that he was not gonna do anything that would elect Trump.