RUSH: Andrea Mitchell, NBC News, Washington, on today’s Morning Joe, NBC’s chief correspondent for Washington, Andrea Mitchell, reacted to the State Department inspector general report criticizing Hillary Clinton for her use of a private email server.  Mitchell first dismissed the Clinton campaign’s defense comparing Clinton’s behavior to that of her predecessor, Colin Powell, then declared the report to be hard to be seen as anything but devastating.

It’s not allowed.  To not return those records before she left the State Department, she violated the official records act, according to her own State Department IG appointed by Obama.  What you’ve just shown now, Andrea, completely undercuts the argument Hillary’s making for more than a year that she was just trying to persuade voters that she’s trustworthy.  I think the most surprising and shocking thing is their reaction, claiming this is the same as what former secretaries did.  Hillary Clinton was lying also by telling people it was nothing but a security review.  There wasn’t any investigation of anything going on.  The IG report indicates the exact opposite.

So here’s Andrea Mitchell on NBC today saying, “Gosh, there are so many flaws in Hillary’s argument.  I don’t see how this is anything but devastating for Hillary, given the fact they’ve been making a completely different argument now for more than a year.”  If we had the audio.  And we don’t want the audio.  I don’t have enough time.  I’m just telling you that she wiped Hillary out, and Andrea Mitchell is a BFF of Hillary Clinton.  Andrea Mitchell wants Hillary to be president so bad.  That’s why she’s so devastated.  And we had these guys yesterday saying this is not gonna go away. This is gonna stay with us throughout the whole campaign.

This is serious, serious stuff.  ‘Cause everybody knows, even though you try to soft sell this and say she broke the rules, where do the rules come from?  The rules come from the law.  She broke the law, not violated some rules.  Back to the audio sound bites.  This is Charlie Rose and Mark Halperin and John Heilemann.  You know, these guys make our cut every day.  Cookie must have a thing for Halperin and Heilemann.  Don’t get mad, Cookie.  I’m just having fun here.  These guys make our cut every day.  We have audio sound bites of these guys every day.  Well, they’ve got their show on Bloomberg TV.  Mark Halperin, John Heilemann.  They were guests last night on Charlie Rose Show on PBS.  And Charlie Rose said to Halperin, “Mark, how damaging is this, really?”

HALPERIN:  This is not the worst thing ever done, but it’s really bad.  And the report — scathing is not too strong a word.  It is an indictment of how she handled this and how her aides handled it.  She shouldn’t have done it.

ROSE:  And it plays into hands.

HALPERIN:  Her Republican opponent calls her “Crooked Hillary.”  This was not an appropriate thing to do.

RUSH:  Yeah.  Trump calls her Crooked Hillary.  Not an appropriate thing to do.  She lied about it after she did it.  She did what she did, she lied about doing that and got caught.  And now she’s back, “What difference does it make? It was years ago, what difference does it make now?” is gonna be her standard refrain.  So the next bite from the Charlie Rose Show, again, Halperin and Heilemann the guests, and they keep talking about this, as you will hear, they are deeply, deeply concerned about the deep long lasting impact of this.

ROSE: Why does — (crosstalk)

HEILEMANN:  That’s a powerful argument and a narrative and a framing device that Trump is going to adopt.

ROSE: You guys all know this better than I do, is that if the questions are raised go to the heart of your fragility…

HALPERIN AND HEILEMANN: Yes. And this does.

ROSE: — that’s the worst thing that could possibly happen.

Questions go to heart of your fragility is the worst thing can happen?  Fragility, the root of that is fragile.  Is that what they mean?  I don’t think of her as fragile.  Do you?  Sorry.  That just doesn’t work.  Gayle King, CBS This Morning.  They’re worried about this.  Gayle King said she went to a cocktail party last night and everybody was sick and tired of hearing about the emails at her cocktail party.

KING:  I was at an event last night, and both Democrats and Republicans were quoting Bernie Sanders saying, “I’m sick and tired of hearing about your damn emails.”

ROSE:  But that was a long time ago and he’s since changed some of that.

KING:  He has, but the people at this party last night haven’t.

ROSE:  When you have something that is a controversy and it feeds misgivings about you, that you don’t play fair or you get away with things that other people don’t get away it, it’s damaging.

DICKERSON: That’s right.  It falls into a caricature or a characterization of you, that’s a problem.

KING:  Do you think it will affect her campaign?

DICKERSON:I think it already has.

O’DONNELL:  The Washington Post called this inexcusable, willful disregard for the rules.

RUSH:  Yeah, they didn’t do anything. That’s Norah O’Donnell in the bathwater.  The Washington Post actually supports her on this.  They get their obligatory, “Oh, this is really bad, how could she have done this,” but then they cover for her, or they try to.

You know who’s got to be the single most ticked off guy in the world about all this today is Bernie Sanders.  Do you think he would have that night back if he could take it back. It was in Philadelphia, it was a debate, he said, “And I agree that we don’t need to hear anymore about Mrs. Clinton’s emails.”  You think he would love to have that back?  Think if he would have gone in heavy on her emails back then, he would have been seen as a precursor.  But he gave her cover on this months and months ago.  And you know darn well if he could get it back, he would.

CALLER:  Hey, Rush.  Good afternoon.  Thanks for taking my call. 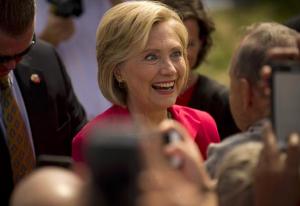 CALLER:  I’m gonna get right to the point.  I’m active duty military, and I’m undecided for the election right now.  But it doesn’t matter to me who wins because I have to work for whoever gets elected, regardless. But I just wanted to say two things.  This… I’ve been asking a lot of guys that are around my unit, you know, asked about the election, who they’re gonna vote for. And absolutely zero — zero — personnel here said Hillary.  That’s one.  And, two, if any of us active duty guys did what she did, we would have probably been the court marshaled and sent out with a dishonorable discharge.  Now, you say this is gonna have a big impact on her election, but I disagree.  I think she’s gonna continue to brainwash the left and say, “You know, Trump hates Mexicans. Trump hates women. Trump hates Muslims,” and it’s gonna keep her going all the way until November.  That’s my theory.

RUSH:  Well, you know what’s interesting about this?  I don’t think there is a lot of fatigue in this email story.  Gayle King may be running around cocktail party people at places where she goes to in Manhattan who may be tired of it.  I don’t think there is that much fatigue on this, which is surprise.  You would think people would be empty. Their emotional reservoirs for this would be empty.  “Come on. Can we move on?”  But there’s such anticipation.  Will she be indicted?  Will the FBI recommend it?  How big a crime is it?  There’s still a lot of interest in this.

RUSH:  And, by the way, one other thing.  I don’t buy this idea that Joe Biden is untouchable, that Joe Biden is somehow angelic and sympathetic. This guy’s run for president on his own a couple times, and hasn’t gotten past the first set of primaries.  There’s something missing there that an open campaign demonstrates.  Well, we’ll hold that in reserve in the event that that happens.