Don’t Doubt Me: Trump’s Not Using the Word “Worker” the Way Socialists Do

RUSH: I have to tell you all something.  You people in this audience, I am so impressed, you in this audience have memories rivaling my own.  And I am genuinely dazzled by it.

I had a number of emails today asking me how in the world I am going to defend Trump for saying… When he was asked what he wanted the Republican Party to be, his answer was, “I want it to be a worker’s party,” and there are people in this audience who remember me decrying that term and ridiculing that term as having socialist, communist roots. I’ve always pointed out socialists and communists… Fidel Castro. He calls the citizens of Cuba “workers,” for example. The father of Elian Gonzalez, the little five-year-old kid that Janet Reno stole and sent back down to Cuba?

Fidel, when he talked about this talked about the dad of Elian Gonzalez, he said, “Oh, yeah, yeah, yeah. He’s a great worker. He’s a good worker.” And I have always… That’s just cringe-worthy to me. People are not “workers.” That’s a robotic term for the way socialists look at the hoi polloi. So here comes Trump. He’s asked what he thinks the GOP’s gonna be in the future.

He said, “I want it to be a worker’s party.” So people say, “So, Rush, the Republican nominee uses a term that you properly tie to socialism and communism. What do you think about that?”

I’ve got all these people challenging me on this. Can you imagine the memory that these people must have? Right here. “Trump: I want the GOP to become a ‘worker’s party.”’ Folks, I’m just gonna tell you: He doesn’t mean it that way. Trump’s not a socialist or communist. He doesn’t mean it that way. Trump, once again, is using terms as they are actually defined in his world. I know exactly what he means by that, and he doesn’t mean anything socialistic or communistic about it — and the reason I know that is because he doesn’t think that way.

Trump is not an ideological guy in that way. So what Trump is simply saying, I am convinced — and if you can prove me wrong, feel free to have at it. But I’m convinced that what Trump is saying is that he wants the Republican Party to be on the lookout for people that work for a living. Blue-collar people, whatever. But he wants the Republican Party to be the champion of them. It’s easy to figure out what he means here. He’s out there talking about trade deals and immigration and all the people getting shafted by this.

We all know who those people are. These are people in the manufacturing sector and other sectors of our economy where jobs have been displaced and lost and moved abroad. I know exactly what he means by that, and he’s not talking about socialism, communism terminology. If you wanted to take it a step further — and he doesn’t know this, either. But, you know, one of the Republican Party’s brand problems has been that it’s always been identified with management: Big Business, management, entrepreneurs.

I mean, you have to admit that the Republican Party and many in the conservative wing of the Republican Party spent a lot of time talking about entrepreneurs, particularly during campaigns. They talk about the job creators. “We gotta get out of their way. We gotta grease the skids. We gotta make sure entrepreneurs have what they need,” and the Democrats have always… It’s just been assumed the Democrats are the home to blue-collar working people, and the Republicans are home to… This is incorrect, but this is the branding. This is the way it’s evolved.

So Trump comes along: “I want to see the GOP become a worker’s party.” He’s not talking about a socialist or communist country. He wants the Republican Party to represent the very people in this group, the very people showing up to his rallies, the very people whom he’s already championing: People getting up and going to work every day. He doesn’t know this other stuff. By the way, that’s not an insult, either. It’s not a comment on Trump’s knowledge or ignorance; it’s just the way he thinks. And so many people in this can’t figure that out.

He’s totally outside the box. They keep trying to plug him into the playbook and the behavioral patterns and so forth that have traditionally been defined by political campaigns and politics in general two parties, and he’s not. He’s an outsider. He doesn’t talk that way. He violates PC every time he opens his mouth. So there’s still people that can’t figure it out. And there’s still people looking for any opportunity whatsoever to trip him up, and they thought this was one of those

RUSH:  In fact, I think the public understands almost everything Trump is saying.  When we take time to explain Trump, I’m explaining it to the Drive-Bys, in many cases, and, in some cases, Republicans who don’t get it.  Of course, the Democrat don’t, either.  But see, folks, this is why there is such panic in the political class.  Everybody does understand Trump.  He doesn’t have to be explained.  Everybody gets it.  They might disagree, but everybody knows what he’s talking about. 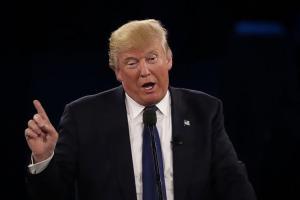 He’s not lying.  He not camouflaging. He’s not masking.  He’s not PC.  And everybody else in the political establishment does all of that.  So that’s another reason why there’s so much abject panic of Trump.  Now, there’s also substantive disagreement with Trump in many sectors, too.  I’m not trying to categorize all of the disagreement with Trump as surface stuff.  There is some serious substantive disagreement with him on the part of many conservatives. I understand that.  But in the context of this whole thing about Trump saying “I want to see the GOP become a worker’s party,” in general the fact that his supporters do know what he’s talking about is one of the things that rattles so many in the political class.

Here’s what he said.  He was asked what he thought the GOP would look like in five years.  He said, “I love the question.  Five, 10 years from now, different party.  You’re gonna have a worker’s party, a party of people that haven’t had a real wage increase in 18 years.  They’re angry.  What I want to do, I think cutting Social Security, big mistake for the Republican Party, and I know it’s a big part of the budget.  Cutting it the wrong way is a big mistake, even cutting it at all.”

“I’m not sure I got there through deep analysis,” when asked about his views.  “My views are what everybody else’s views are.  When I give speeches, sometimes I sign autographs, I get to talk to people, I learn a lot about the party, I learn what people say by listening to what they say to me.” He said he learned that voters were disgusted with Republican leaders and channeled their outrage.  It isn’t complicated.  Everybody wants to complicate this, and it isn’t.