RUSH: Donald Trump’s in Fresno, California. He is doing an event as we speak, and he’s on another one of his rolls. You know, Trump is a circumstantial, situational guy. He is not an ideologue. He’s not. You know, he’s out there making a speech today, and his ideology has nothing to do with what he’s talking about. He’s reacting to circumstances that happened today — the newsfeed, if you will. He’s responding to what’s in the news today, and he’s talking about it. He’s reacting to somebody.

‘Cause somebody said that he’s actually close with the guy that runs North Korea. So he’s blowing that up. And then somebody accused him, he said, of being close to Putin. And he said, “Well, I can’t really be mad at Putin. Putin said I’m a genius and am gonna lead the Republican Party. I mean, that’s off to good start, right? Wouldn’t we be better getting along with Russia than not get along with ’em? Hell, at least he’s a strong leader! We don’t have a strong leader. Hell, we don’t have a leader, right? We don’t have a leader.

“We don’t have a leader, period, right?” The crowd’s going nuts. And it’s pure situational, pure circumstantial. That’s why nobody can pin the guy down. That’s why nobody knows what he’s gonna do next ’cause he doesn’t know. He’s totally reacting to what’s out there. Something I can relate to. Well, look, I’m gonna stop with the comparisons.

I’m gonna go to the audio sound bites here. This is Trump. Gotta hear this. Yesterday afternoon, Bismarck, North Dakota, Trump had a press conference. He had his rally, and during the Q&A a reporter said, “Elizabeth Warren, she seems to have made it her job…” And Trump interrupted the reporter.

REPORTER #1: Is that offensive?

TRUMP: Look, look, she is… Is it offensive? You tell me.

TRUMP: Oh, I’m sorry about that.

TRUMP: Pocahontas? Is that what you said? Elizabeth Warren?

So the reporters don’t know what to do with this. (interruption) The reporter was Native Amer…? The reporter says… Well, these reporters are used to being able to silence candidates by saying, “It’s offensive! How dare you, Mr. Trump?” and Trump just keeps firing right back at ’em. And then he said, “Look, about Pocahontas. See, Elizabeth Warren is a fraud, folks. Elizabeth Warren is as white as any white person has ever been white. She is so white that five seconds in the sun and she turns red, okay? 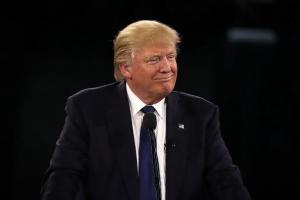 “She said when she was trying to get hired at Harvard that she has Indian blood because she needed to be part minority. Being a woman wasn’t enough. She had to be part minority. She had to use affirmative action to get hired. So she said there was Indian blood way, way back in her family tree, and the evidence was her high cheekbones.” She said all that. It’s not Trump’s fault that he heard it and calls her on it. It’s not Trump’s fault that everybody else thinks it but nobody else will say it. This is how the left gets away with all this.

They lie. They come up with these phony things about themselves and about their supporters, and they get away with it because everybody on our side’s afraid to bring it up because she’s a woman. “That could be sexism! It could be racism,” whatever. The Republicans have been so cowed into silence and not being critical. And Trump just makes fun of ’em, mocks ’em, and fires it right back at ’em. And this is one of the… Well, this is what he continued saying in that same press conference.

RUSH: Ho-ho-ho-ho-ho. “She’s been ineffective other than she’s got a big mouth.”