Mrs. Clinton Has No Audience

RUSH:  So some veterans groups are popping up now claiming that Trump is using them as props in the campaign.  I think… I mean, anything could be true.  But I think what’s going on here, is it not, that the VA is in dilapidated condition after almost eight years of the Obama Regime? It has become known to be so bad, that what in itself has become a campaign issue, is the treatment of American vets, and particularly during the time of a Democrat administration when it’s widely understood that many Democrats look at the US military as a problem rather than a solution in the world.

So Mrs. Clinton’s out there, after reading the Washington Post story on how Trump has been lying about how much money he’s raised for the vets.  Yeah, the Washington Post, big tell-all, big expose.  Trump said he had donated $6 million, and the Washington Post said, “No, he’s lying!  It’s only $5.6 million!” So Hillary and her campaign staff hired some vets to go do a faux protest against Trump outside Trump Tower in Manhattan over the weekend.  It was a total Astroturf operation.

“We don’t think Trump is genuine about vets. We think Trump is using us for props.”  So that will all have to be sorted out and weighted.  Meanwhile, if you focus on the Clinton campaign you find a whole big bunch of panic and nothing.  From a very, very concerned AFP (that’s a French News Agency): “Clinton Campaign Faces a Deficit of Vital Commodity: Enthusiasm — His rallies are like raucous circuses, interrupted by the clamor of a captivated crowd that is quick to finish his sentences.

“Hers seem more like sober presidential addresses, exhaustive litanies of proposals presented to well-behaved supporters. Making matters worse, Hillary Clinton tends to arrive late, while the Donald Trump Show always begins on time.”  But even the New York Times story says where they’re worried that Hillary has no enthusiasm — and she doesn’t.  Hillary Clinton doesn’t have a connected audience.  I think this is a crucial thing to understand.  I’ve mentioned this I-don’t-know-how-many times. 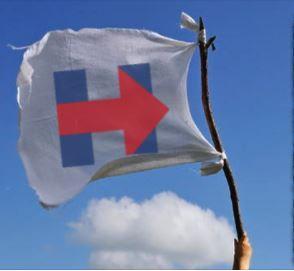 They’re always gonna be called followers, oddballs, wackos, tinfoil-hat wearers, what have you.  But real politicians have supporters.  Real politicians have voters.  They don’t have acolytes.  They don’t have teeming, slaving, slobbering groupies following them around.  Mrs. Clinton does not have an audience.  Mrs. Clinton’s where she is because the Democrat Party has ordained it.  Well, she has demanded it, and they have acquiesced.

Because there is this understanding that she deserves to be paid back for all she has done for the party by continually standing by her husband when he’s gotten in deep doo-doo.  It was supposed to be 2008, then Barack Hussein O came along, and they swept her aside for a younger, more attractive black guy.  And now she’s being swept aside by an older, doddering, curmudgeon-like seasoned citizen in Crazy Bernie.  But she has no audience connection.

She has no connection with people.  People don’t have anything personal, no linkage.  She is the Democrat nominee.  There’s a big capital D next to her name, and that’s it.  Now, in presidential politics that can often be enough to get you where you need to go in the Electoral College.  But up against Trump it’s always gonna come off as looking listless and dead by comparison.  So here you have even the French News Agency acknowledge it: “Clinton Campaign Faces a Deficit of Vital Commodity: Enthusiasm.”

And even in this story they characterize her speeches as presidential and Trump as a “circus,” and it takes me here to the New York Times.  Once again: “Hillary Clinton Struggles to Find Footing in Unusual Race.”  This is by, essentially, Jonathan Martin, our old buddy from his Politico days.  “Democrats could hardly believe their good fortune last month when it became clear that Hillary Clinton was headed to a general election showdown with Donald J. Trump.

How can that be?  She’s the Smartest Woman in the World! She’s the most qualified person to ever run for the presidency!  She’s known and adored by Americans for over 25 or 30 years.  How can it be that she’s “struggling to find her footing”?  I guess the New York Times and the rest of the Drive-Bys think if they just constantly claim that Trump has, quote, “insulted so many voting blocs” that it’ll just become fact.  In reality, Trump hasn’t insulted any voting blocs.

Trump’s got so much of an advantage over her that we need a Fairness Doctrine in the media to be able to balance our coverage of Trump and Hillary.