Callers on the Terrorist’s Motivation

RUSH: Robin in Cody, Wyoming.  Great to have you with us.  Hello.

CALLER:  Greetings from the greatest wonder in the world, Yellowstone, where wolf pups are free, and bison calves will cost you $700.  Have you been watching the news?

CALLER:  One fell in a geyser and dissolved himself.

CALLER:  Yeah, I swear.  You know, the rules don’t apply to a lot of these people —

RUSH:  Wait.  A guy fell into Old Faithful and dissolved himself?

CALLER:  No, a geyser, at Norris Geyser Basin.

RUSH:  I thought that’s what Old Faithful was, was a geyser.

CALLER:  Well, Old Faithful is actually a geyser.  What he fell into was a hot spring.

RUSH:  So he didn’t dissolve himself, he boiled.

CALLER:  Well, you know, they’re very acidic, and before they could retrieve the body, the body I think had dissolved.

CALLER:  And that was about a couple of days.

CALLER:  But, anyway, we’re very glad you’re back and welcome back to the radio.  We missed you.

RUSH: Thank you very much.  It’s a very, very important call for people on their way to lunch in LA.

CALLER:  Well, I’ll tell you, I have some answers for you.

CALLER: I know why the Democrats won’t name their enemies.  I know the motive for the guy in Florida.  And I think I know why Democrats will vote Democrats regardless.  You want to hear the answers?

CALLER:  Okay.  Well, let’s get to the motive for the guy in Florida.  You know, it was a hate crime.  If he were really a Muslim — well, let’s define what he did.  I would call it suicide by jihad.  You know, if he were a really good Muslim he wouldn’t have been in a bar drinking alcohol. He wouldn’t have been using a phone app trying to pick up gay guys. He wouldn’t be divorced already and remarried with a kid.  I mean, he probably got kicked out of his mosque.  So I’m thinking he just needed a flashy way to get his 15 minutes of fame and said, “Hey, what’s the going way to do that, you know, I’ll get a gun, I’ll go in there and I’ll shoot it up.”  If there were gun control in Florida and he couldn’t get a gun, I’m sure he’d have found some way to get a bomb.

CALLER:  He says he was.

RUSH:  Well, no, we’ve got the people that he supported.  But you have an interesting take nevertheless. 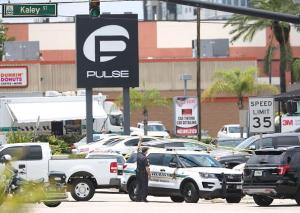 CALLER:  — a practicing Muslim is not gonna go into a gay bar.

RUSH:  Do not make me — it’s better to just let this go.  (interruption) What?  I’m not, no. You know, it all depends on where you are.  I tell you what, you know what you should do, Robin?

RUSH: We go to the Matt in Haddam Neck, Connecticut.  Great to have you on the EIB Network.  Hello.

CALLER:  Welcome back to my home.

RUSH:  Thank you very much.  I appreciate that.

CALLER:  As irritated as we all are with the predictable responses here, I just wanted to make a quick point regarding how truly frustrating it must be to be a jihadi on American soil.  These guys are doing everything they can to be heard, and it doesn’t matter how loud they scream. Regardless of what they write or who they call, the Tea Party, conservatives, and a rifle keep receiving all the credit for the kills while they, to a large degree, are ignored.

CALLER:  I mean, ISIS wants to be the ones that are hated and feared, but instead Islam gets honored with a commemorative stamp from the postal service while the right is the one that’s cautioned against.

RUSH:  You know, as I said, I shouldn’t be laughing here in the midst of a tragedy. But the guy has a point here. Old Matt has a point. If you’re, you know, Siddiqui Akeem Sahib Skyhook and you’ve just shot up a nightclub… Oh, wait, you’re dead.  But the survivors of these things have to get up and listen president blame Christians or guns for it.  You can’t catch a break.