The US Open Highlights One of Golf’s Problems

RUSH:  Well, the US Open’s underway in Oakmont Country Club, Oakmont, Pennsylvania.  It’s actually just northeast of Pittsburgh.  And it’s the hardest golf course I’ve ever played, and it is by reputation maybe the most difficult golf course ever played for the US Open.  And it’s supposed to be… I played it as part of a Boys and Girls Club charity tournament about three weeks ago, which means it was set up for the Open.  The rough was where it is, the fairways were narrow, the greens were fast.  It’s the second time I’ve played it.  And for those of you…

They had a bunch of rain delays. They’re about ready to get started here, I think, for the third time.  The early starts still have not finished today, so they’re gonna be hustling to catch this thing up by Sunday.  They’ll do it, but they’re gonna have to play starting on both number one and number 10, maybe even Saturday, especially if there’s more rain today and tomorrow.  But for those of you that end up watching this on TV, these guys playing this game make it look so easy.  And I’m telling you: This golf course…

As long as these guys keep it in the fairway off the tee, they’re going to make this course look… There’s nothing tougher than a US Open course.  It’s different from any course any amateur ever plays.  Augusta would be the same way if you ever had the chance to go there.  But the way they set these courses up with the rough and the fairways being so… The greens are like glass, they’re so fast.  Now they’re slow. They’ve had so much rain, the greens have slowed up and it’s confusing these guys after three days of facing pool tabletop greens. 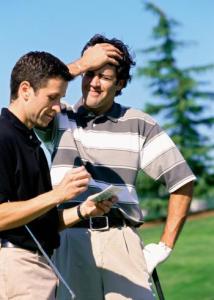 You’ll never be able to do it. You’re not born with the swing you need to do it, but the golf club people have it really tough because they can’t keep people playing the game, it’s so damn hard.  And there are things that could be done to change that, I think.  But that’s for another day.

RUSH:  No, no, no.  Now, don’t misunderstand me.  Of course, the guys that win the tournament are putting lights out that week, too.  There’s no… But I’m just telling you, if you can’t hit the ball long off the tee, you don’t have a prayer.  You can talk about “drive for show, putt for dough.”  If you’re not off the tee long and in the fairway, you don’t have a prayer.  I don’t care who you are, playing any game, any golf.  You know, and that’s what golf needs to fix.  People can’t hit it far off the tee and they give up the game ’cause it isn’t any fun.

RUSH:  Yeah, watching the US Open here.  Number seven is a 684-yard par 5, or 680.  Now, a little downhill to the right, but still.  When we played, it wasn’t that far.  I mean, they’re “playing the tips,” obviously. But I’ll just give you an idea how far these guys hit the ball. I’m telling you, that matters more than anybody on a commentator side wants to talk about.

RUSH:  No, no.  I can’t wait to get back up there, play Oakmont sometime.  I didn’t do that badly. If I had a little more course knowledge, I would have scored better.  I was hitting the ball well that day.  It was fun.