When to Buy a New MacBook Pro

RUSH: Here’s Christopher in Lynchburg, Virginia.  Christopher, I’m glad you waited.  Great to have you on the EIB Network.  Hi.

CALLER:  Hi, Rush.  I need your advice today.  I began a PhD program this fall, Old Testament in Hebrew, and I’m looking to buy a new computer before I start, and because of the software that we use. And I’m not sure if I should buy one now or if I should wait ’til the spring, early 2017, when they typically make changes to the Apple models.

CALLER:  Mainly I’m worried about the charger, because I know that they changed the charger for the MacBooks, and I’m worried if I buy a new MacBook Pro now —

RUSH:  What do you have now?  What are you using now?

CALLER:  You’re gonna laugh at me if I tell you.

RUSH:  Optical CD drive in it?

RUSH:  Yeah.  That’s one of their still top-selling computers because of the price, and people somehow still want a DVD drive in it.  Here’s all I know. The MacBook Pro line — and this is all rumor. Nobody knows.

RUSH:  The MacBook Pro line is supposed to be refreshed by the end of the year.  And you can probably count on the fact that they’re gonna use USB-C instead of the current MagSafe like you have on your 13-inch, so they will probably change cables and charging mechanisms and so forth.  But if you’re not thinking of buying a new computer ’til the first quarter of next year anyway, I’d wait.

CALLER:  You think I should wait.  Well, the problem I have is my processor is a 2.3 and has the core i5 and so it’s beginning to run really slow, especially with some of the language software that I have to use.

CALLER:  I had thought about upgrading before school starts.  I’d hate to spend the money and then —

RUSH:  Well, look, if you went out and bought the current 13- or 15-inch MacBook Pro, you’re gonna have, just within its own stand-alone universe, one heck of a machine.

RUSH:  The thing is, if it’s coming next month, yeah, wait.  If it’s coming in two months, wait.  But it’s not coming for six or seven months, and nobody even knows, it’s all rumor, and your need is immediate.  And I’m sure Apple would work with you on a trade-in at some point if you really wanted to work — I’m not giving away policy.  I’m just saying you could trade these things in or sell them and upgrade whenever you want.

You do not get full value when you sell, but upgrading, they’re trying to make that easier, with the phones anyway, and I’m sure with their computers as well.  But, at the end of the day, since you don’t know when this new one’s coming, it’s just a rumor, and you know it has to be soon, they haven’t refreshed ’em in a year, so you know it’s coming at some point.  The odds are, based on the way Apple rolls out new products, it will be in the fourth quarter.  So if you want the latest, greatest and you can wait six months instead of two, do it.  If you need it right now it, and you can’t wait, then go get what they have now.  It’s absolutely fabulous. 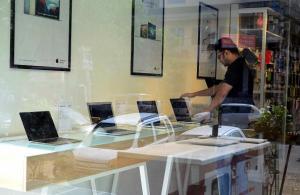 CALLER:  Thank you very much.  You know, the frustrating part is they always upgrade it so quickly and then every time I get a new computer, a new one comes out. “Man, I should have waited.”

RUSH:  Wait a minute.  On the Mac line it’s not as fast as it is on the iPad and phone.  I mean, the upgrade’s a little slower because they’re prisoners to intel and how fast intel can upgrade the processors, which is a whole ‘nother thing Apple might do on their own someday.  And intel just announced that they’re slowing down their upgrade process on processors anyway.

I’m hesitant to tell you what I would do.  That’s the data that I would have.  I always, myself, I always wait.  When I think I’m within six months or three months, I wait for what I think is coming. Even if it’s just based on rumor, I wait for the upgrade. If I can deal with what I have now for some more months, I do.

RUSH:  Since we had a call on Apple, I’ve gotta share with you I’m getting more than the usual number of emails from people who know that I occasionally install Apple beta software on the iPhone software.  And people are asking me — it’s really strange, too — why I think there’s been so much time since the first beta, ’cause usually in two weeks, beta 2 comes along.  I don’t know why people are asking me.  I don’t talk about it that much.  But I’ll give you my theory since I’m getting so many emails.

I actually think that the first beta combined beta 1 and beta 2 because this beta has excellent battery life.  Usually first betas don’t.  This first beta is pretty solid, not like usual first betas.  For some reason they combined ’em.  I think beta 2 comes July 5.  I’ll just predict it.  I’ll just make a prediction right now.  We’ll find out next week.

RUSH:  I probably shouldn’t have predicted July 5th ’cause they’ll hear about it and do it a different day just so I won’t be right. So I’m gonna withdraw my prediction and say I have no idea when the next one’s coming.  Just be patient.  It’s gotta come sometime.