Millennials Want to See Laws Passed, and Anyone Who Backs Smaller Government Is a Villain to Them

RUSH: I have to tell you, I went home for a couple days over the weekend, and we had dinner over at my cousin Steve’s on Sunday night.  And a couple federal judges were there ’cause my cousin was presiding over a naturalization ceremony, last night, on the courthouse steps, the Common Pleas Courthouse Steps. I was not able to stay for that.  But another federal judge friend of the family’s was in town for it. So we played golf earlier that day, and one of the guys… My cousin Jim couldn’t make it; so we went and got a stand-in, got a local man by the name of Andrew Morton.

He’s a former patent attorney and an agriculture expert and farmer and so forth, and he’s a Millennial.  And at different times we got to talking about what is happening with the Millennial generation because a bunch of them sitting at the table, and he said something fascinating to me about his friends.  Now, he’s not the kind of Millennial that we hear about on college campus that are these tender snowflakes that can’t handle controversy and don’t like opposing points of view.  He’s a standard, run-of-the-mill…

He’s an all-American kind of guy, and he said the thing that troubles him most about his generation is — and this was a first, but it totally clicked. His nickname is Morty. You know, he looks like Brent Bozell, beard included. That’s why I thought I was playing golf with Brent Bozell.  He said… He’s 31, 32. He said that the people he knows in his age-group define good government by how many laws are being made.  And if anybody is perceived to be standing in the way of laws being made, they’re the bad guys.

But it’s not something that I’ve automatically associated with Millennials.  I’ve associated other things, but love of government and… That’s not the way to put it.  But just the judgment that writing more laws dealing with the things that are bad or wrong, is the sign of good government.  Well, I don’t know how common that is among the entire Millennial generation, but there’s no greater obstacle we could face to smaller government, limited government than having a generation of people who believe that good government equals active, writing law, writing new regulations government.

The more laws, the better.  And in fact it’s the exact opposite that is needed here.  We are so overregulated — we are so overlawed, if you will — that it’s getting in the way of everything.  It’s getting in the way of life.  I mean, it’s just shocking to me.  Now, I’ve always known that there are those people out there, don’t misunderstand.  I’ve always known that there are people who believe this. The government shutdown people brought this home for me.  The reason a government shutdown’s bad is because the government’s not doing anything. 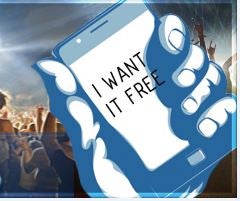 It’s essentially what we do.

So our work continues to be cut out for us.