RUSH: Look, let’s just go to some of the audio sound bites from the FBI director James Comey today so that you can hear if you missed it, you can hear in his own words a review and content of what he actually said here.  Here’s the first one.

RUSH:  Stop the tape.  “Although we did not find clear evidence that Secretary Clinton or her colleagues intended to violate laws,” blah, blah, blah, “governing the handling of classified info, there is evidence they were extremely careless in their handling of very sensitive, highly classified information.”  What does that say about her qualifications?  My only point is here, there’s plenty of room to go after her on incompetence, can’t trust her.  I don’t think she should get a pass.

“Hey, you know, she deleted emails just like you and I do.  She deleted a portion of her inbox, get too big, she takes some emails out, you and I do the same thing.” Well, the secretary of state’s not you and me, number one.  Number two, you talk about intent.  Why have an off-site server in the first place?  Why have a server that is not a part of the State Department, therefore the government record, if you are not intending to traffic in secrecy?  And if you are intending to traffic in secrecy and you happen to be trafficking in top secret, classified data, and you are extremely careless, grossly negligent in it, do we want somebody like that at the helm of this country?  Here’s the rest of the bite.

COMEY:  Seven email chains concern matters that were classified at the top secret special access program at the time they were sent and received.  There is evidence to support a conclusion that any reasonable person in Secretary Clinton’s position or in the position of those with whom she was corresponding about those matters should have known that an unclassified system was no place for that conversation.

RUSH:  All right.  Now, look, I’m gonna go out on a limb here.  I don’t know Comey.  I only know people who do know Comey.  I first heard of James Comey back when he was John Ashcroft’s aide. He was one of his top deputies, and Ashcroft is from Missouri, impeccable character.  And so Comey benefits from that, in terms of my knowledge.  I only people who know Comey and they say the same things about Comey they said about Pat Fitzgerald.  He’s above doubt.  He’s a straight shooter.  He’s law and order, and he’s not corruptible and so forth.  I’ve heard all this stuff. Okay, so let’s go with that.

COMEY:  Although there is evidence of potential violations of the statutes regarding the handling of classified information, our judgment is that no reasonable prosecutor would bring such a case.  Prosecutors necessarily weigh a number of factors before deciding whether to bring charges.  There are obvious considerations like the strength of the evidence, especially regarding intent.  Responsible decisions also consider the context of a person’s actions and how similar situations have been handled in the past.  In looking back at our investigations into the mishandling or removal of classified information, we cannot find a case that would support bringing criminal charges on these facts.

The fact that he says at the end of it, “Well, I don’t think there’s evidence of potential violations of the statutes.  Our judgment is that no reasonable prosecutor” — what I’m thinking here is for you legal beagles, is even in such a case, prosecutors threaten the perp in order to make some kind of a deal to get some kind of a concession, admission of guilt.  It’s rare that, in a case like this or similar cases, that the prosecutor, “You know what?  Nothing to see here, we’ll see you later, adios, cheerio.”

They’re always calling the potential defendant’s counsel trying to make some kind of deal. Lesser charges for an admission of this, an admission of that. There was none of that in this case.  There doesn’t appear to me that there was any intention, any effort to actually find Mrs. Clinton culpable.

Now, I know the reputation of James Comey.  I’ve cited it myself for you here, too.  But I also know who runs this outfit, and that’s Barack Hussein Obama, and ever since he and Eric Holder got hold of the DOJ it has been politicized from top to bottom in every which way you can imagine.  So, you know, I’m gonna have to ask people who know these things professionally and more knowledgeably than I do.

But if you look at what Comey’s done, if you go back and listen to this like we’re doing here, he lays out, he details her negligence; her carelessness, he mentions the fact that there is evidence of extremely careless, the handling, no evidence of policy violations of the statutes, our judgment is that no reasonable prosecutor would bring such a case.  But he clearly lists item after item after item that makes it look like something seriously wrong went on here.  So, in the political sense, there are things to pursue in the political process that go to her competence, her judgment, of her qualifications.  Here’s one more bite.

COMEY:  As a result, although the Department of Justice makes final decisions on matters like this, we are expressing to Justice our view that no charges are appropriate in this case.  I know there will be intense public debate in the wake of this recommendation, as there was throughout the investigation.  What I can assure the American people is that this investigation was done honestly, competently, and independently.

No outside influence of any kind was brought to bear.  I know there are many opinions expressed by people who are not part of the investigation, including people in government, but none of that mattered to us.  Opinions are irrelevant, and they were all uninformed by insight into our investigations because we did our investigation the right way.  Only facts matter.  And the FBI found them here in an entirely apolitical and professional way.  I couldn’t be prouder to be part of this organization.

RUSH:  You know, in a way I can hear: diGenova, you don’t know what you’re talking about, you never did know what you were talking about.  You were out there telling you people stuff going on in this office, and it wasn’t going on, you weren’t here, you didn’t know.  That’s what I hear the him saying there. Not just to Joe diGenova, but to everybody else who claimed that they had inside sources at the FBI who were saying that there was scuttlebutt, that the FBI would face mass resignations if there was an indictment, if there wasn’t a recommendation for charges, because goods are there, they’ve got her.

How many times did we hear this?  And even with all that I keep saying, folks, we’re being played here, and today we get the final act in and we are being played, but that doesn’t end it.

RUSH:  Rudy Giuliani was on Fox recently.  I hope to have the audio sometime tomorrow, maybe.  But he said on Fox that if the report that Comey gave today was an FBI background check, that Hillary would never get a security clearance.  You want it summed up in one sentence?  There you go.  The report Comey gave today, if it was a background check that the FBI had done on her, she would never get a security clearance.

Now, no reasonable prosecutor would ever seek charges on these kinds of things.  She didn’t even intend to do any of this.  But he laid out every gross negligent act she committed with US national security and top secret data and documents.  You know, the original announcement of Comey’s appearance said it was also going to feature Q&A with reporters.  But he did not.  The report I saw said that Comey was gonna address at 11. He showed up on time, too.  He actually started at 11 o’clock.

The thing I saw, the promo for it said that he was gonna take reporters’ questions later, or afterwards. I can’t remember if I saw that was gonna be on camera or off camera.  But I don’t think he did either way, did he?  Not that that means anything.  I’m just pointing it out.  But I thought Rudy’s way of looking at this is pretty fascinating.  If this was an FBI background check, there’s no way she gets a clearance, which means she could not hold these offices that she’s had or is seeking.

She trafficked in classified information.  Comey admits that that happened.  The FBI admits that she was grossly negligent sending and receiving top secret classified information on a private email server that was not protected.  She has not been cleared, folks.  This is the key.  You’re gonna have a lot of people say here, Democrat buddies, “Hey, man, I love it, Hillary was cleared.”  She wasn’t cleared.  She just wasn’t charged.  It’s a difference. 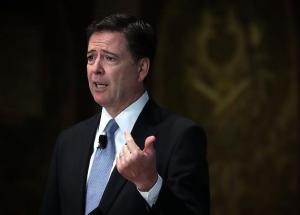 Another thing Comey said was that other people might be charged under the same circumstances.  He said, “Now to be clear, this is not to suggest that in similar circumstances a person who engaged in this activity would face no consequences.  To the contrary, those individuals are often subject to security or administrative sanctions.  But that is not what we are deciding now.”

I mean, I don’t know how you interpret that other than she’s different, she’s not other people.  Other people have faced sanctions or consequences, but she’s not going to.  You can add it up yourself and get to what you want to go to, but I told you it wasn’t gonna happen.