The Rule of Law Must Be Respected, Especially By Our Elected Officials

RUSH: We start on the phones in Atlanta.  Todd, you’re up first.  Really glad you waited, and it’s great to have you here.  Hi.

CALLER:  Yes, sir.  I was wondering if you can explain something to me.  How do you unintentionally delete 30,000 emails that are pertinent to an FBI investigation?

She set up that private server for the express purpose of being able to do things that nobody would be able to learn about.  And that’s why, when you find out how they’ve used that Foundation to raise money from all these foreign governments and foreign entities, who the hell knows what was in these 30,000 emails that she supposedly threw away because they were nothing to do with anything but a wedding or yoga lessons or what have you.  You’re exactly right.  Everything about this was intentional.

CALLER:  Yes, sir.  And what about the security clearance for Sid Blumenthal, her daughter, Huma, Cheryl Mills, I mean, they were handling these documents. They were removing the classification from them in order to send them out.  I mean, where is somebody going to be held accountable for that?

Even then, the Democrat Party circled the wagons around them, made them bigger stars than they ever were and went out of their way to protect them against any and all attempts to make them accountable.  But that’s what rips me on this.

You know, the rule of law, I remember, I don’t mean to be name dropping here, folks.  And, by the way, Todd, thanks for the call. I really don’t mean to be, but one of the fortunate things that’s happened to me as the result of my success here is the people that I have met that I otherwise wouldn’t have.  I’ve never taken any of it for granted.

I remain in awe of the things that my success has permitted me to do, the doors that it’s opened.  And one of the people that I met and became actually fairly close to was Lady Margaret Thatcher through mutual friends here in Palm Beach.  I drove Margaret Thatcher around a golf course one day out in Colorado, a golf course called Eagle Springs.  We nicknamed it “Ego Springs” because the membership is largely Wall Street billionaires who helicoptered in.

But, anyway, we were out in Vail for a celebratory social weekend.  She decided she wanted to see the golf course, but she doesn’t play golf.  So it was suggested to me that the next day I take her, drive her around in a cart.  “Would you do that, Rush?”  (laughing) “Yes, I’ll do that.”

So she shows up.  Well, she didn’t show up.  We were staying at the same place.  She left dressed to the nines, typical Margaret Thatcher in a dress.  She sits on the passenger side of the golf cart and we go tooling around the cart path. People are out playing golf, and as we would approach tee boxes or players about to hit shots, we would stop so as not to be a distraction, using proper golf course etiquette.  She was wearing an Easter-type bonnet hat.  It was windy.  But that didn’t stop people from noticing her. 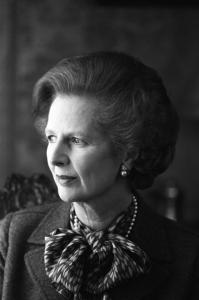 And you should have seen the double-takes and the open-mouthed stares.  ‘Cause it’s Margaret Thatcher being driven around a golf course, just seeing it, she wants to see the beauty, the vistas and so forth.  And there were several dinners that took place, and I remember at each dinner, she held court.  Whatever she introduced as subject matter was what we all discussed.

And at one dinner, this is a different occasion than the get together out in Vail.  On one occasion she started talking about the rule of law, and she did a 30-minute discourse on it about how crucial it was to civilized society and how it was the glue that held everything together and that, without it, there would be no way to have anything like a Republican — by the way, she loved the United States.  She thought the founders were among the most brilliant human beings who had ever lived.  And of course she would; they were Brits.

They were defectors.  They were essentially British guys who came to the US, of course, like everybody back then was, and founded this country.  She loved them all.  She was intimately familiar with them and could quote them.  But she got off on rule of law one night, became the subject matter for a two-and-a-half hour dinner.  And she was, of course, right on the money.

And what we’re witnessing is what happens when the rule of law evaporates.  The rule of law, the simplest way to explain it — it may sound self-explanatory — but what is the law?  It’s just a bunch of words on paper.  Or a bunch of words on a computer display.  What is it that forces people, inspires people to obey those words?  Just because words are written down on a piece of paper saying this is not permissible, you can’t do that, here’s the crime, here’s the penalty for the crime, blah, blah, the rule of law is the acceptance and understanding of its primacy and respect for it.

Now, obviously criminal types have no respect for it, by definition.  But we’re not talking about criminals.  We’re talking about people in public life.  We’re talking about elected officials who campaign and seek our votes for all kinds of reasons.  And one of the things that is paramount in every election is the attempt to elect people who are of impeccable character, who are honest, who have integrity, who will thus respect the rule of law.  They run for president, they run for vice president, Senate, House, mayor, whatever, there is a United States Constitution, there are state constitutions, there is the oath of office.  It all matters.

We assume that the people who seek votes, who want to hold these high offices, we have always been able to assume they were people, we might disagree with politically or ideologically, but they had a common acceptance and reverence and respect for the governing documents that held the country together and defined it.  That’s what we’re losing here.  You can see it in the fight over the Second Amendment.  You can see it in any number of ways that the Democrats feel like they’re hamstrung by it.

To them, the Constitution is unfair, it’s too limiting, it’s is antiquated, it’s outdated, and it’s so insignificant now, you don’t even have to go through the legal process of amending it.  You can just ignore it because these are modern times, and it was written so long ago, and the Founders couldn’t possibly have anticipated what life would be like today.  Therefore, what they wrote should not be automatically applicable to life today.  That is the absence of respect for the rule of law.  And it’s exactly what’s happening.

Liberalism scares me, folks.  I come across here as adamantly opposed to it, but I do so because it scares me.  Liberalism, socialism, communism, they scare me. They frighten me because of what they portend life to become should they become dominant governmental mandates, should it become the way our government is operating.  Because it all equals the loss of liberty.

But the left doesn’t go about amending it that way.  They just usurp power.  They just take people’s liberty and freedom away, under the guise of granting more security, more goodies, being Santa Claus or what have you,.  When you get to the point now where just because you happen to hold elective office or just because you happen to be a member of a particular party, that you are above the law, that you cannot only escape law, but you can expect that you’re gonna escape the law.  When you can behave with relative assurance that you’re not gonna be held accountable to it, then we’re on the verge of losing it, and that’s exactly what this is.  That’s exactly what Hillary Clinton has been permitted to do.

I am also not comforted by the fact, the theory, “Well, Rush, it is what it is, you know, and now, okay, maybe they didn’t indict her, but they sure spelled out everything she did wrong.  The American people now know it, and Hillary Clinton cannot hide.”  That’s not how it works.  That is not how it works.  We don’t live in a direct democracy.  We don’t let people get away with the law and hold them accountable at election time.  They are held accountable within the United States justice system.  And if the justice system lets them skate, they get away with it.  What you’re talking about is the only recourse left, and that is to hold her accountable by denying her the office she seeks based on acquiring the knowledge of how she skated the law, how she broke the law, but she still got away with it.

And every time something like this happens, there’s a little chink, a little chunk, a little portion of the armor protecting this country and the Constitution that’s stripped away from it, exposing it to even more vulnerability and attack.  And it alarms me.  And I don’t say any of this because I have political disagreements with Mrs. Clinton.

RUSH:  Richard Nixon is rolling over in his grave.  Richard Nixon was forced to resign by pressure bought by representatives of both parties and the legal system.  And I’m telling you, whatever happened with Watergate, whatever Nixon’s role in it, it doesn’t hold a candle to Hillary Clinton trafficking in national security documents, openly and unsecured on a private email server that was not protected or backed up.

I mean, it’s incredible what she has gotten away with here and the mechanism used to not hold her accountable, the twists and the turns, the bastardization of the legal system.  And that’s what’s truly damaging.  You and I would not ever, ever be permitted to benefit from such a twisted bastardization of the legal system in order to for us to escape accountability.  You and I, it would never, ever happen.  And that’s the least that’s wrong with it.