C-SPAN Examined Hillary’s 20-Year-Old Book — And Guess Who They Found Living Rent-Free in Her Head?

RUSH: This is C-SPAN’s Book TV on Saturday.  Roundtable discussion.  Peter Slen of C-SPAN spoke with the Brookings Institute scholar Gil Troy about Hillary Clinton’s book It Takes a Village.

Now, would somebody tell me why C-SPAN’s Book TV is doing a whole roundtable on Hillary Clinton’s 1996 book?  I mean, aren’t there newer books to do C-SPAN Book TV on?  But why are we going back to Hillary’s It Takes a Village?  Well, maybe we’ll find a clue here in the audio sound bite.  So the host, Peter Slen, says, “Mrs. Clinton writes ‘Despite the rise of anti-government extremism, it’s becoming clear that most Americans do not favor a radical dismantling of government.'” 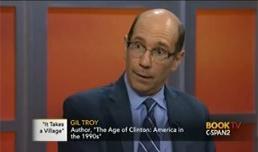 TROY:  That’s the Clinton way.  She’s singing the song of the Third Way.  Yes, we’ve learned some lessons by overdoing it in the Great Society. But we can’t go the Reaganite way. We cannot go the Rush Limbaugh way.  I think in the 1990s, Rush Limbaugh’s probably a more powerful figure than anybody else, and he’s the powerful negative force.  You often feel Rush Limbaugh’s presence in the book — a negative presence — saying, “We’re not Rush Limbaugh.”

RUSH: This isn’t even one of the eight sound bites that lead off the roster today.  Do you believe that?  Yeah, let’s do it.  Let’s play it again.  “That’s the Clinton way.  She’s singing the song of the Third Way.  Yes, we’ve learned some lessons by overdoing it in the Great Society. But we can’t go the Reaganite way. We cannot go the Rush Limbaugh way.  I think in the 1990s, Rush Limbaugh’s probably a more powerful figure than anybody else, and he’s the powerful negative force.  You often feel Rush Limbaugh’s presence in the book — a negative presence — saying, “We’re not Rush Limbaugh.'”

So my question earlier: “Why in the world in so important to attack me?”

I’m just a guy on the radio from noon to three every day.  What is it?  I’m asking rhetorically, but nevertheless.  Here is this guy.  This guy’s name is Gil Troy, and he’s a scholar at the Brookings Institute.  (replaying of sound bite) Gee whiz! Am I living rent free in these people’s heads or what?  Negative force, negative force. Most powerful force in the nineties, negative force is all through this book, It Takes a Village.  Speaking of Hillary, here she is on CNN Friday on a program called The Lead.  Fill-In Host Wolf Blitzer is interviewing her and says, “Here’s the fundamental question, critically important right now: Why do you believe you would be better suited at handling the racial divide in America than Donald Trump?”

HILLARY:  I will call for white people, like myself, to put ourselves in the shoes of those African-American families who fear every time their children go somewhere, who have to have the talk about, you know, how to really protect themselves when they’re the ones who should be expecting protection from encounters with the police. I’m going to be talking to white people — I think we’re the ones who have to start —

HILLARY: — listening to the legitimate cries that are coming from our African-American fellow citizens, and we have so much more to be done and we’ve got to get about the business of doing it. We can’t be engaging in hateful rhetoric or incitement of violence.

RUSH:  So many questions.  Why didn’t any of this get fixed with Barack Hussein O?  We just elected the first African-American president.  He’s had 7-1/2 years unstoppable to do whatever he wants.  He said he was gonna unify us.  He said he was gonna bring us all together.  People voted for him thinking this stuff was all gonna end.  There wouldn’t be any more racist America.  What happened?  Why is it, after 7-1/2 years, that Mrs. Clinton needs to come in and fix it?

Why do we have “legitimate cries coming from the African-American community”?  Why have we got so much more to do?  Why do we still have to go about the business of doing it?  Why are we engaged in hateful rhetoric after 7-1/2 years of the peacemaker, Barack Hussein O?  But again, all of this is based on lies.  She is now promulgating the idea that it is a legitimate fear that young African-Americans have that the cops are targeting innocent (that’s key here, folks). innocent) black men and shooting them.  That’s what the belief is.

That’s not only not happening, when we talk about guilty or highly suspect, whatever, the numbers are nowhere near what Mrs. Clinton wants people believe.  That’s what I mean here.  Here’s Hillary Clinton benefiting, trying to benefit from all of this.

And he’s now done it with Mrs. Clinton.  For a guy making a significant point about Mrs. Clinton, he could not have had a better backdrop than the events of last week when it comes into focus at the same time his movie’s coming out.

Now, D’Souza’s a researcher, among his skills.  He’s certainly paid attention to how to explain to you, in movie form, which is a very pervasive form, the way in which the Clinton family looks after themselves, the way they take care of themselves financially.  He spells out her lifelong contemplated plans for this nation.  It’s why he’d titled the movie Hillary’s America.

It’s a fast paced two hours.  You’re already well informed about so much of this stuff, but the details and the way it’s laid out by Dinesh D’Souza on the screen makes it all that much more impactful.  You’re gonna see people with knowledge being interviewed.  You’re gonna see some of her plans played out on the big screen.