RUSH: From the LA Times:  “Behind a Bill Clinton speaking engagement, a $1400 hotel phone bill and $700 dinner for two.”  It goes on to describe the demands the Clintons make when they go out and do a speech, and it’s just replete with some of the most outrageous demands, including screening the audience and screening all questions to make sure there aren’t any questions about Lewinsky or anything else that could turn it into a circus. 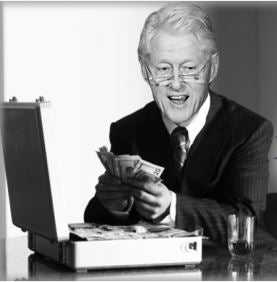 And the LA times says (mocking), “But there’s no evidence to suggest that Mr. Clinton himself personally…”  What the hell? This is how they always do with these people.  The Clintons are setting new records for demolishing things, but there’s no evidence they were involved.  “Clinton demanded a private jet to fly 70 miles, San Francisco to Davis, California,” 70 miles.  I guarantee you the jet that he would demand, that would cost minimum — because of charter companies and how they — 25 grand.

That would not be the actual cost, but that’d be probably the minimum. Nnobody wants to put a cycle on an airplane for 70 miles.  A landing and a takeoff on a private jet reduces resale because it puts a cycle on it. It’s silly!  But he demands it. But there’s no evidence that the president himself issued the demand.  Oh, no, course not! Every time, these people are exonerated. There’s no evidence Mrs. Clinton sought money from foreign governments.  It just showed up!

RUSH:  Yeah, there’s lots of other news besides this out there, a lot of it involving the presidential campaign, of course, and some people have done some digging into the Bill Clinton… What would you call this?  You’ve heard about rock groups and the demands they have when they go play a concert, like, “M&Ms but only one color.” Like, a thousand M&Ms but only one color in the greenroom backstage.  Somebody has uncovered what Bill Clinton demands for one of his speeches.

RUSH: You know about Andrew Malcolm. He used to write for the LA Times, now works at a couple blogs. Headline: “What If Trump’s Goal Is Really a Clinton Victory?” The subhead: “Donald Trump is torpedoing his presidential campaign, Andrew Malcolm writes. Even when Hillary Clinton gives him openings, he talks about himself instead.” He’s not making any serious effort at fundraising; he’s not spending any time at all criticizing or talking about Hillary. He’s just talking about himself.

RUSH: A couple things.  Andrew Malcolm used to write for the Los Angeles Times. He’s a conservative columnist, now writing for McClatchy.  “What If Trump’s Goal Is Really a Clinton Victory?”  He’s getting very alarmed. Trump doesn’t seem to be campaigning. He seems to be torpedoing himself.  He doesn’t seem to be doing anything helpful. He’s not raising money; he’s not bashing Hillary.  He has squandered opportunity after opportunity to ream her out royally.

James Comey spelled out how to go get Hillary and Trump hasn’t said a word about it.  He talks about, you know, Trump just squandering every opportunity, and he’s beginning to wonder if this whole thing is a setup to guarantee Hillary’s win.  He’s actually put it out there.  A lot of people think this, and a lot of people have thought this from day one of the Trump campaign. Andrew Malcolm, he may not be the first. Some of you bloggers may have first referenced it.

But it’s the first I’ve seen so pointed.

RUSH: Folks, I’m gonna tell you, there is a story here in my Stack unrelated to any of this.  I’m gonna dig it out here.  I’m gonna take a break now, dig it out.  It’s about — just found it.  It’s about two Democrats and how they have turned public office — they’re in the House of Representatives — about how they have turned public office into their own private bank.  It’s always true. If you want to find the answer to something: follow the money.

RUSH:  One of the things that we know is part and parcel of elective office is fundraising.  And what do we think we know because of what we’ve been told?  We have been told, and thus we believe, that it’s very expensive to win election, and it’s very expensive to stay in office.  And we’ve been told that if you’re in the Senate, the vast majority of your time after you win election is fundraising for the next election six years down the road.

In the House it’s even worse because the election is two years away.  So you are constantly fundraising.  Now, we know that something like 90%, if not more, of all House races are won by the incumbent, do we not?  There are exceptions like 1994 and 2014, but, for the most part, the incumbents win.  And they win because they’re in office and have a track record of giving goodies away from the federal Treasury to people in the district.  A new bridge, a new old folks’ home, a new hospital, or what have you, that an incumbent just can’t compete with.  And yet they’re out raising money left and right.

They raise more money than they need, and it’s always for reelection efforts, always to run campaign commercials and bus signs and campaign signs and get-out-the-vote efforts and phone banks.  And I thought about that the other day when I ran across this story at the Washington Free Beacon.  Here’s the headline:  “Rep. Bobby Rush Paid Wife $550K From Campaign Funds, Kicked $190K to Church He Founded,” from his campaign funds.

Well, now, who writes the rules on what these members of Congress can do with their campaign funds?  They do!  They write the rules.  So have you ever wondered why it is that a member of Congress or the Senate can use unspent campaign funds to pay off campaign debt or convert to — do you know that they can convert some of it legally to personal use if they are leaving office?  They write the rules for this.  Where does a guy get $550,000 to pay his wife, and for what?  This is just one example.

“Rep. Bobby Rush (D., Ill.) has paid both his wife and the church he founded hundreds of thousands of dollars from his campaign’s coffers since 2002, campaign finance records show. Campaign expenditures also show funds were given to a number of other Rush family members throughout the years. Additionally, more than $14 million in taxpayer-backed government grants were awarded to a wellness center associated with the church he founded in Chicago.

“Mrs. Rush began receiving checks for ‘consulting services’ in 2008 on top of salary and wages as she pulled in $98,650 from the committee. … She was also not the only family member to appear on his campaign’s payroll. Marlon Rush, Rep. Rush’s brother, has collected more than $10,000 from the committee. His son, Flynn, pocketed hundreds for polling and petition drive services. … In addition to the payments made to his family members, the congressman also kicked over $200,000 from his campaign funds to the Beloved Community Christian Church in Chicago, a non-denominational church he founded in 2002.”

Now, where does he get this money?  By the way, the story goes on to describe the creation of a nonprofit.  “He requested a $100,000 earmark for the nonprofit that was ultimately approved in 2008. The earmark was tacked onto an appropriations bill and was made in the amount of $305,500. The nonprofit also received a $290,663 grant from the Department of Justice in fiscal year 2008.”

You know what you can call this?  This is called how to get rich by finding ways to get money from the state, the federal, and local governments.  The Clintons managed to pull this off, not only doing that, but with foreign governments chipping in.  And nobody is gonna say “no” to Congressman Bobby Rush, just like nobody’s ever gonna say “no” to Barack Hussein O, when you get down to it.

So why does he have almost a million dollars in campaign funds that are not being used for the campaign?  Well, obviously he raised it.  Obviously there were people willing to donate it, fine and dandy.  But, for crying out loud, folks, I don’t care who you are, you and I in no way can we score that kind of matching funds from the federal government for a church that we found.

If we’re conservatives, the IRS is not even gonna grant us the status to fundraise, which is what happened to Catherine Engelbrecht, Tea Party foundation. Lois Lerner said, sorry, you don’t qualify.  This is just one congressman.  You go to Washington, that’s where the money is.  US Treasury, where $4 trillion is spent every year, and three trillion is collected.  That’s where you go.

RUSH:  I must not have printed it out, so I’m gonna have to find the details tomorrow.  We’ve also got three Trump sound bites from his recent speech that I’m not gonna be able to squeeze in today.  So we’ll save those for tomorrow.  But I’m telling you, the New Black Panther Party wants reparations. They want five states for themselves.  Look, folks, don’t misunderstand. It’s not gonna happen.  I’m just telling you, when Elijah Cummings is out there saying, “They just want what the Constitution guarantees?”

They want to trash it, at least the New Black Panther Party does.

Whatever relationship they have with Black Lives Matter is yet to be seen.