RUSH: Did you hear about the Cleveland Browns player whose name is Isaiah Crowell, did you hear what this guy did?  Did you see what this guy did?  This guy, did he posted at Fakebook or was it Twitter?  Instagram.  It was Instagram.  This guy had a drawing, pretty close to an actual looking photograph, but it was an artist’s rendering of an African-American slitting the throat of a uniformed policeman, much as the ISIS beheading videos look. He posted it on Instagram.

Of course, Black Lives Matter, inspiring things, they’re not a terrorist group, right?  No, no, no.  And they’re not racist.  No way.  They’re just inspiring crap like that.  Well, anyway, the Browns, Cleveland Browns: Oh, my God, we can’t win a game anyway, our quarterback’s in rehab and may commit suicide, we had to get rid of him. And now we got this to deal with.

So they pulled it down.  It was put up less than 24 hours after the attack in Dallas.  And this kid, Isaiah Crowell, the player for the Browns, is 23, shocking image on Instagram, man dressed in all black slitting the throat of a white cop kneeling on the ground.  It mirrors ISIS beheading videos.  He has deleted the picture and he has apologized saying that he was emotional over the shooting deaths of two black men by the police last week.

I just read that this morning.  I didn’t know, either.  The cop in the Minnesota video with the man bleeding out in the car seat there, and the Louisiana, the Baton Rouge cop, I read today they were both nonwhite.  They did not identify them other than that.  They just said nonwhite.  So we don’t know what they are.  I guess since we’re multicultural it’s all the same, doesn’t matter, right?  Nonwhite’s all you need. 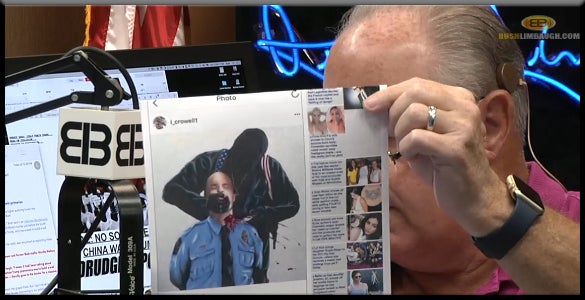 Well, anyway.  So this guy, this player for the Browns watches all this and he thinks they’re white cops.  So he finds this drawing of an ISIS-like beheading of a uniformed police officer, posts it on Instagram, thinks he’s cool, thinks he’s hip.  Hey, he’s just doing what he felt like doing after reading about and watching what happened and the way it was covered.

Let me make sure there’s no secret data here like an email address.  Okay.  Here we go.  Had you seen that?  Cleveland Brown player, 23, posts this on Instagram less than 24 hours after Dallas.  The Browns made him take it down, and they’re now saying an apology is really not enough.  I mean, there’s gotta be more than just an apology. This is so outrageous.  Wait a minute.  He’s 23 years old.  Why did he do it?  He thinks this is what happens.

He thinks this is what needs to happen to make things right. He thinks the opposite of that picture is what is happening to young black men all over this country every day by white cops.  I’m not exonerating him, but, for crying out loud, if this kid turns on Fakebook, if he turns on Twitter, if he turns on CNN or any cable news, what’s he gonna think about what’s happening?  Hell, all he has to do is listen to any Democrat talk about this and he can get an idea about this that isn’t true.