The Roger Ailes I Know

RUSH: I’m sure that you are all aware of the sexual harassment lawsuit that’s been filed by Gretchen Carlson against Roger Ailes at Fox News.  It’s a lawsuit not aimed at Fox.  It’s targeted specifically at Roger Ailes. I’ve had people email me, “Why haven’t you commented on this?”  Well, A, I actually didn’t think it was necessary, but I’d be happy to. 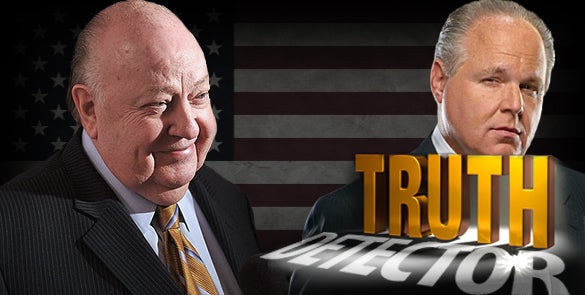 Let me throw in, folks. I’ve known Roger Ailes since 1990.  I’ve never seen Roger Ailes even flirt with a woman.  Roger used to host some of the most fun things, Saturday afternoon water volleyball games. He had a home at one time at Croton-on-Hudson, and Rudy would show up with his kids. It was a representative group of the New York Republican power structure. Peter Powers, his family, it was families and so forth, some people that worked for Roger, a lot of women.

I’ve never heard one woman — I know some of the people that work at Fox — it’s never, ever been mentioned.  And like everybody else I was shocked and taken aback when I saw this.  I also know Gretchen.  I’ve been interviewed by Gretchen at the Miss America Pageant.  I know that she’s a Christian, she’s religious.

Then I found this story on Breitbart.  “Gretchen Carlson Attorney Donates Big to Left Wing Democrats Who Aggressively Criticize Fox News — An analysis of political donations that Nancy Erika Smith –” She’s the lawyer for Gretchen “–  has made shows she is a hardcore progressive Democrat who has given thousands upon thousands of dollars to Democratic candidates for office. Many of those Democrats that Smith has supported have repeatedly, viciously and very publicly criticized the Fox News Channel for its coverage.”

How did Gretchen end up with this lawyer?  I mean, those are the questions I ask.  How did she end up with somebody like this?  Now, maybe if you’re going to bring a lawsuit like this you want to go out and find a pit bull that hates Fox.  And maybe that’s what she’s done.  I’m telling you, folks, of all the people about whom you could make such an allegation, this is one that nobody who knows him would believe. 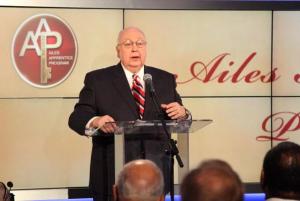 It’s just… You know, I introduced Roger… He was given an award in 2009 by a Boy Scout group in suburban New York, and there were a number of people who spoke, and I was one.  And the point that I made is here you have Fox News, and at the time… This was 2009. At the time, Fox had 1,700 employees.  Fox debuted in 1996.  I said, “The thing that you have to know about Roger Ailes is that he’s a winner and a leader — and to illustrate this, I want you to look at Fox News and admit what you know about it.  It has a distinctive identity.

“It has a unique and distinctive culture.  Its identity is different from any other news organization.  It is perceived to be honest.”  Its fans — back in 2009 — perceived Fox to be unbiased and fair and balanced and all these things.  I said, “The guy responsible for this is not even on the air.  Roger Ailes never once appears on camera.  Roger Ailes has never appeared on camera.  Yet Roger Ailes — because of his leadership and dynamism — has been able to create a culture with 1,700 people who are all oriented in the same professional direction.”

I said, “You can’t accomplish that unless you are deeply and profoundly respected.  You can’t have that kind of organization. Do you realize how hard it is? Imagine being a boss of 1,700 people. Pick whatever business you want. Imagine being a boss of 1,700 people and having your business day in and day out be true to its identity no matter who is on the air, no matter who’s doing what, no matter who off the air is writing, producing, booking.”

It’s like you pull into McDonald’s; you want a Quarter Pounder with Cheese. No matter where you go, it better taste like a Quarter Pounder with Cheese.  If it doesn’t, then there’s a problem.  Well, no matter what time of day, no matter what day of the week, you tune on Fox News, and it’d better be what you’re expecting, or you’re not gonna stay, and it is.  To me… You know, it’s easy for me to control the culture of this show ’cause it’s just me. I’m the only one here.  I don’t have any writers, producers, or anything else to control.

Ah, sometimes I have to ride herd on Snerdley and phone calls, but… (chuckles) I’m just kidding.  But 1,700 people and having them all on the same page you are?  I just don’t know how you do that without having demanded the respect and loyalty of all of those people.  And I don’t know how you do that if you’re out engaging in things like sexual harassment and threats and saying, “If you don’t sleep with me, you’re not gonna be working tonight or whatever,” which… Whatever these allegations are, this doesn’t make any sense to anybody that I know who knows Roger.  So that’s…

I haven’t held back on saying anything about it.

But the story on Gretchen’s lawyer and her political objectives served as a transition for me to get into it today.