RUSH: We go to the audio sound bites and we start with media montage, the Drive-Bys versus Trump.  This kind of speaks for itself.  It’s a montage Thursday, Friday, Saturday, and Sunday.  We have a number of different people, both in the media and out, commenting on Mike Pence as Trump’s vice presidential nominee selection.

KELLYANNE CONWAY: He referred to himself as Rush Limbaugh on decaf.

MARC SANDALOW: He likes to call himself Rush Limbaugh without the caffeine.

LETICIA ORDAZ: He described himself as Rush Limbaugh on decaf.

JANET WU: Once a radio talk show host when he described himself as Rush Limbaugh on decaf.

NATALIE BRAND:  He described himself as the Rush Limbaugh on decaf.

ROBERT COSTA:  His nickname, his moniker was Rush Limbaugh on decaf.  That’s what they called Mike Pence back in the day.

DAVID BROOKS:  If he was a decaf Rush Limbaugh, I don’t know what he is to Donald Trump.

ERIC BRADNER:  Styled himself as Rush Limbaugh on decaf.

RUSH:  So I wasn’t even around, I had nothing to do with the selection, and yet Trump chooses “Rush Limbaugh on Decaf” as his vice presidential running mate.  That’s the theme from the Drive-Bys.  (interruption) No, no. In fact, the coffee that was made here right before the show is still nice and hot ’cause we have this Thermos pot in here, so, no, I’m cool.  But thank you for asking: I do not drink decaf.

Pence used to be a radio talk show host, like everybody else.  And he was asked to describe himself by people, and he actually is the one that came up with the phrase, “I’m Rush Limbaugh on decaf,” which you can interpret it any number of ways.  He’s conservative, he’s just not as energetic. He’s conservative, he’s not as out there. He’s a little bit more reserved, maybe a little less bombastic, whatever he meant by it.  But when he said he’s Rush Limbaugh, he meant I am conservative as long as the day is long, as short as the night is short, I’m conservative.  That’s what he was saying.  And so that’s what they’re all harping on here.

ABC This Week.  This was Sunday morning during the roundtable, George Stephanopoulos talking with Donna Brazile and the political analyst Matthew Dowd (who used to be a Republican when the Bushes were in the White House), and they’re talking about Trump naming Pence, and they had this exchange.  This is Brazile and Dowd…

BRAZILE:  If Trump is such a great businessman and manager, why does picking a vice president — which is one of the big tests of a presidential candidate. Why does it devolve into a clown show?

DOWD:  I actually think his pick of the vice president was the first time — and I think the process… I think they messed up the process.  It made it look like Keystone Cop situation.

STEPHANOPOULOS: It sure seemed like he had second thoughts late Thursday night!

RUSH:  You know, I didn’t see any of this until way after it happened.  I read about it, and the way it was written about, “It was obvious Trump didn’t want this guy! It was obvious Trump’s supporters made him pick this guy and Trump was so mad about it that when the announcement ceremony went out there and pretty much let everybody know he didn’t like this guy, didn’t want this guy, but he was stuck with him.”  And then later that night there were rumors about how Trump had gone to his people and said, “Is it too late to get rid of this guy?  I don’t want this guy.”

And yet none of that is gonna matter, because the general consensus is from people I’ve asked today, they pretty much like the selection of Pence as a good balance.  Let me ask you a question.  In fact, I’m gonna include the people on the other side of the glass on my question.  I asked everybody at the golf tournament this past weekend —  ’cause they all asked me, “What do you think of Pence?”  So I had a question for ’em.  You’d be amazed, by the way, at how many people were stumped by this question.  And it’s not complicated.

“What is the only really important responsibility and duty of the vice presidential nominee from here to Election Day? What is the number one gig? What is the thing he has to do?” (interruption)  No, it is not raising money.  It’s… (interruption) Well, okay, Snerdley, you’re 50%. You’re half. You’ve named half of it.  Snerdley said, “Attack dog.”  The VP nominee is who really goes after the Democrat nominee.  Brian, you want to take a stab at this, or you want to talk about Henrik Stenson and Phil Mickelson?  Here’s the answer.  (Brian’s a sports guy.)

The number one — and don’t feel bad in there, because a everybody else I asked was stumped by this.  The number one responsibility of the vice presidential nominee is to defend and promote the nominee. No matter what.  And so you ask yourself, “Okay, is Pence the guy to do that?” When Trump goes out there and says whatever Trump says… I mean, take a pick of anything he has said or make something up you think he might say. Pretend that Trump had said what Newt said that we’re gonna deport anybody in this country that believes in Sharia law. 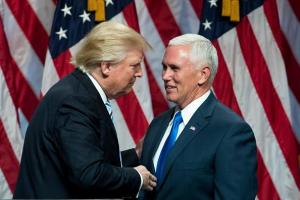 Okay, imagine for a moment that Trump said it. Can you see Pence out there defending it to the hilt, promoting it to the hilt, explaining why it’s the greatest thing you’ve ever heard, why it is the most brilliant tactical position a nominee’s ever had?  ‘Cause that’s what he’s gotta do.  A vice presidential nominee cannot go out there and say, “I really wish our nominee hadn’t said that.  I can’t quite understand why he said it.  I certainly don’t agree with it.”

He can’t do that.  The vice presidential nominee cannot do that.  I had people say, “I’m glad he didn’t pick Newt! Newt’s too old.”  Well, I tell you what. If Trump would have said something like Newt said, if Trump would have said we’re gonna deport every Sharia-believing person in America, Newt could riff for 15 minutes on its brilliance with two seconds of thought and pull it off. (chuckling)  So in that sense, Newt would have been a good choice.

But I’m just throwing the question out because it is one of the things that Pence is gonna have to be prepared to do, and we all know Trump.  I mean, he comes at things from many different vantage points, including off the wall, at times.  So it’s gonna be fascinating and interesting to watch.  There’s other tactical reasons why it’s a good silence.  Pence is a solid conservative. There is no doubt about that.  But there’s some people angry at him. They think he caved on the religious Freedom Act in Indiana after all the protests.