RUSH: So I just got a sound bite here from Carl Bernstein, famous for being a part of Woodward and Bernstein, who are accredited and acclaimed for destroying Richard Nixon.  Carl Bernstein was on CNN’s Newsroom this afternoon with Brooke Baldwin, and they were talking about the first night of the Republican convention.

Now, Bernstein is a connected leftist.  I mean, he’s a joke to many of us, but to them, this guy is the Guru.  I mean, he goes way, way back, and his take on things is seen as representative of what the deep, dark left actually believes before they go out and lie about it.  So, given your understanding of that, listen to this.

BERNSTEIN:  This election is the Gettysburg of the culture wars.  It is that important.  Whoever wins this election, the culture wars may be over, but they’re never gonna be the same.  It is about two Americas.  Whoever wins, we are going to see a different America.  And that — what we saw in the hall last night was that battle being waged, and I think somewhat effectively in terms of those who are in the middle, who are independents, I think that there was some ground gained in the culture wars last night for the Trump people.

RUSH:  Now, I’m telling you that Bernstein going on television, saying that, that tells us what they really think.  Before they go out and start commenting on how rotten and horrible the mother of the Benghazi victim was and how Melania was a plagiarist and all that, what they’re really thinking, you know, these people, they made a great play, the Trump people made a great play for the independents last night, and they did it on the culture, the basis of culture, and the disintegrating moral rot that is taking over our culture.  And Bernstein’s very much aware of it and very much concerned that last night was a good night for that aspect.

By the way, I think he’s right about this culture war business.  I don’t think there is any question.  We’ve been in a culture war for decades now, but I think he’s right.  This election’s gonna determine the ultimate winner.  And, by the way, the left is winning it, folks.  I just spoke eloquently, I think, too, about the lack of any moral authority in our culture.  There isn’t anybody with any moral authority. 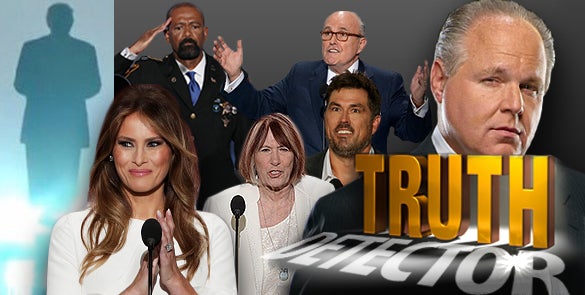 Nobody’s allowed to have any.  That has been one of the objectives of the left, is to destroy any sense that anybody can define morality.

Morality doesn’t exist.  What you want to do is what being an American means.  And there is no limit to it, and anybody that tries to limit you is a bigot or is prejudiced or is racist or is homophobic or is whatever else.  There is no morality.  Nobody gets to define what’s right and wrong, because the left knows that if anybody’s able to do that other than them, they’re gonna be on the wrong side much more than they’re gonna be on the right side.  And they don’t want that.  They hate judgmentalism.  They despise it.  And that’s what they think of morality.  Hence, that’s why we have the culture war.  Some simple concepts as right and wrong.

“You don’t get to determine that,” they tell us.  That’s not up to you, and it’s not up to anybody, and it’s not up to the Bible, ’cause they don’t believe in the Bible.  The Bible is a bunch of phony baloney, plastic banana, good-time rock ‘n’ rollism.  Not the Bible.  The Bible is a bunch of gunk.  God didn’t exist.  That’s just made up by a bunch of people to give them authority and power.  They don’t want to think about it.  That’s why the environment is God or any other inanimate object becomes the deity, because there is no learned morality that descends from it.

Don’t doubt me on this, folks.  When you take the morality away, when you take away moral authority, when you seek and succeed in blowing it up so that there isn’t anybody that’s perceived to have any and you’re not allowed to define it for a mass culture, you have free reign to do whatever you want to do without any condemnation, without any guilt, without any doubt.

And we are right smack-dab in the middle of it, and it is exactly what is happening.  And last night the speakers, people that gave speeches, whether they intended to or not, were addressing the entire concept.  This is what Bernstein picked up.