Liberals Lament: Too Many Trumps!

Here’s a conversation between George Stephanopoulos and Cokie Roberts on ABC.

STEPHANOPOULOS:  Is there any danger of overplaying the family card? 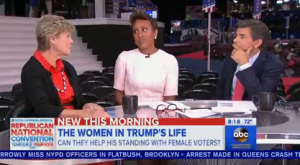 ROBERTS:  Sure there is, because at some point, isn’t there anybody else?  And how many things can you say about how great my dad is, which is why Donald Trump Jr.’s speech last night was good because it didn’t just do that.  His wife gave the keynote speech, and now his daughter introducing him.  It is a family affair here.  And, um, Ivanka, though, uhh, everyone has been very impressed by, and the truth is, they are his chief campaign advisors.  That family is a close corporation, and they are really the people doing the deciding here.  And so therefore the delegates on the floor want to know, y’know, more about ’em.

RUSH:  Whoa, whoa, whoa, whoa, whoa.  The delegates want to know more about him, but there are too many people talking about him?  Which is it?  She said here at the front, “Well, at some point isn’t there anybody else?  How many things can you say about how great my dad is?”  And then at the end, “The delegates on the floor, they want to know, y’know, more about him.”  So which is it?  Too much Trump, not enough Trump, too many Trumpers, too many Trump family members, not enough Trump family members, too many people singing dad’s praises, not enough people doing it? What is it?  They don’t know how to report this. It just doesn’t fit.

RUSH: Cokie Roberts mentioned Donald Trump Jr. last night. Do you know he did that without a prompter last night?  Were you aware of that?  That’s what I heard.  I heard he did not use the prompter for the speech.  You know, as I’m watching Donald Trump Jr., the reaction I had?  I’m thinking leftists, the socialists, the Democrats, they gotta be watching with sheer panic.  Articulate, intelligent, passionate, handsome, and not one of them.

I think Donald Trump Jr., Donald Trump Sr., Melania Trump, Ivanka Trump, Tiffany Trump, I think those are the kind of people the left resents the hell out of.  They’re just lucky.  They’re too perfect. They’re rich, they’re attractive, they’ve never faced any bias and discrimination.  I think the Trump family is almost a microcosm for what it is people on the left despise.  Because the Trump family doesn’t need feminism, they don’t need any of the other leftist causes to have any meaning in their lives.

They’re self-sufficient. They’re self-reliant. They’re intelligent. They’re educated. They’re independently intelligent. They’ve been raised obviously great by a father and mother that care deeply about them.  Everything the left resents is wrapped up here I think, and I mean that, folks.  I think it from the bottom of my heart, that the Trump family stokes resentment like you can’t believe.  That’s why all these people say that there were too many Trump kids on the stage. “There’s too much Trump, too many family members. They don’t know what they’re doing.”

That’s not why.  They make too good an impression.  Listen to a little bit of Donald Trump Jr.

JUNIOR:  He didn’t hide out behind some desk in an executive suite.  He spent his career with regular Americans.  He hung out with the guys on construction sites, pouring concrete and hanging sheetrock.  He listened to them and he valued their opinions as much and often more than the guys from Harvard and Wharton locked away in offices away from the real work.

RUSH:  Now, the establishment rolls their eyes at this stuff, but this I think is part of the bond that Trump has with his supporters.

JUNIOR:  To this day many of the top executives in our company are individuals that started out in positions that were blue-collar.  But he saw something in them and he pushed them to succeed.  His true gift as a leader is that he sees the potential in people that they don’t even see in themselves.  The potential that other executives would overlook because their resumes don’t include the names of fancy colleges and degrees.

RUSH:  You know, that’s another way of saying that we all have somebody in our lives who taught us that we’re capable of much more than we think we are.  For some people it’s a teacher.  Other people it’s a coach.  Sometimes it’s a parent.  And what Donald Trump Jr. is saying here is that he sees the potential in people they don’t see in themselves, and he tells them.  And what he’s really saying here is that his dad has helped people become better than they would be.  And I have no doubt of that.  There aren’t any books about what a rotten boss Trump is and what a cheater, skinflint. His family doesn’t show up on TMZ every weekend.  You don’t have any Kardashian-like activity there.  You never see them in police reports, police blotters or any of that.  Here’s one more D. J. Trump Jr. sound bite.

JUNIOR:  I know he values those workers and those qualities in people because those are the individuals he had my siblings and me work under when we started out.  That he would trust his own children’s formative years to these men and women says all you need to know about Donald Trump.  We didn’t learn from MBAs.  We learned from people who had doctorates in common sense.  It’s why we’re the only children of billionaires as comfortable in a D10 Caterpillar as we are in our own cars.

RUSH:  Do you think John Kerry knows what a D10 Caterpillar is?  Probably thinks it’s some kind of an insect that you send a servant with a can of Raid for.