RUSH: Grab sound bites number eight and nine at least, because this is more of the same here. This is NBC Special Coverage, Republican National Convention, and the NBC crew is Tom Brokaw, F. Chuck Todd, Nicolle Wallace, and Savannah Guthrie.  We’re gonna play you audio sound bites of that moment in time when they realize that Trump has changed the rules of politics and that they’re covering the wrong things.  They’re focusing on the wrong things, like the plagiarism. 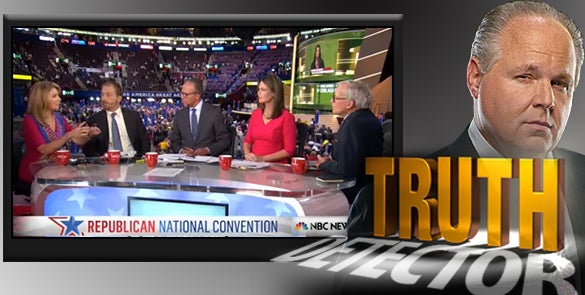 They think it’s a disqualifying thing for Donald Trump that his wife plagiarized Michelle Obama.  They’ve been harping on that ever since it happened.  It’s been that and whatever else they think. Too many Trumps on stage, the hate of Hillary Clinton.  They’re missing it all.  They don’t understand at all what is unique and different about this campaign.  And they’re starting to realize it, is the point.  That’s why I asked the question about Cruz.  I’m telling you, folks, you should see it.

At various blogs, conservative blogs and in the Drive-By Media, the question of the day is whether Cruz is gonna endorse Trump. And obviously to them, the answer to that question means a lot! It may mean everything! To them, I guess we’re to conclude that if Cruz doesn’t endorse Trump, “Why, whoa! That’s more party disunity! Oh, wow, that could be the end of Trump! My God! If Trump doesn’t get Cruz’s endorsement, then Cruz is simply using the occasion of the evening to promote himself for 2020! Oh, my God, this is horrible for party unity!”

Others are saying, “Don’t kid yourself. Everything every speaker says is vetted. Trump’s not going to let him go out there unless he’s going to endorse him.” Yeah, but once he’s out there he can do whatever he wants. If they don’t grab the hook, you get away with it. The point is, it doesn’t matter! It doesn’t matter! But it does to them. They think it’s huge, ’cause they’re looking at this all wrong. They’re looking at this the way they’ve always looked at things. So let’s go to the audio sound bites.

It starts with Tom Brokaw and Savannah Guthrie…

BROKAW: (convention background noise) He has changed the rules of American politics. We just have to begin with that. We can’t look at it in terms of what the past is. It’s about how he has changed it.

BROKAW: We’re playing by different rules. I mean, everything that we have grown up knowing about politics and how you succeed in it, Donald Trump has set aside in the last year.

And Trump is still rolling.

It’s not supposed to be. Trump’s supposed to… Remember, he was supposed to have been destroyed in June. Remember that meme? “Oh, yeah! Presidential elections… If you look really deep and honestly, presidential elections are decided in June.” That’s when Hillary had her 11-point lead and was running all her ads. Trump didn’t have any money, wasn’t spending any, and they thought it was over. And now Hillary’s continued to flitter away, Trump is slowly regaining ground, and they’re coming to the realization that maybe they’re going about this the wrong way.

Here’s Nicolle Wallace. Now, Nicolle Wallace was a Bush administration communications office official, who is now… Oh, I don’t know. Moderate Republican. She goes on TV as a “Republican strategist,” right? But… (sigh) She’s the one, I think, who said she couldn’t vote for McCain because Palin was on the ticket, and if something happened to McCain, Palin would become president. Palin was so stupid, that she just couldn’t do that. She was one of Palin’s handlers. Here’s her two cents on this…

WALLACE: (convention background noise) Tom Brokaw’s point is right. We all watch the wrong thing. What people saw was a beautiful, loving wife giving a testimony about her husband. We spent a lot more time talking about the mashup with Michelle Obama’s speech. What they saw tonight, was his lovely son and a passionate speech from Chris Christie tonight. So I do think sometimes we’re watching the wrong thing. It doesn’t mean it doesn’t deserve our scrutiny ’cause every other campaign would get scrutinized, but Donald Trump somehow manages (snickers) to skate through.

RUSH: That’s it! They can’t… They’re so frustrated! Trump survives every hit, every assault, every takedown. Trump survives it. So they’re beginning to think, “You know what? We’re watching the wrong things! Nobody cares about the plagiarism. What they saw was a beautiful, loving wife giving a testimony about her husband — and the kids? Nobody… We’re not seeing what everybody else is seeing.” Here’s F. Chuck Todd, who is amazed that Trump’s standing in the polls is still high, and Savannah Guthrie has to try to explain it to him.

TODD:  Our own poll came out today, and we should not… (chortling) On the day of all this, he closed to within one point in our SurveyMonkey tracking poll.

GUTHRIE: This is the bottom line.  I mean, it’s not just about whether Donald Trump has changed American politics.

GUTHRIE: The people have changed American politics.  As long as Donald Trump is a protest vote, as long as he irritates elites, as long as he bucks the establishment, as long as he takes orthodoxy of either party and turns it over on its head —

GUTHRIE: — he will continue to get a lot of support among the American public.  They’re sending a message.

RUSH:  Yeah, that was not a happy moment on the set at NBC News last night when they finally had to come to grips with all this.  And it’s gonna continue.  And, by the way, they’re not the only ones.  All the other networks are in a similar position, because they’ve all taken their shots at Trump.  Believe me, folks. This focus on Melania and the plagiarism? You and I, we know what that was for.  They’re trying to take Trump out.  They’re trying to destroy Trump’s candidacy right now.  So it didn’t work.  Now they’re trying to hit Ben Carson, trying to hit Chris Christie, saying there are too many Trumps on the stage.  I mean, they’re pulling out all the stops.  They’re making stuff up now in order to prove to themselves they can still destroy a Republican candidate.