What to Make of the Trump Campaign’s Melania Speech Mea Culpa?

RUSH: Have sound bite 32 standing by because a woman by the name of Meredith McIver has released a statement through the Trump campaign about the Melania Trump speech.  She wrote it, Meredith McIver.  She’s released this statement just recently, last 15 or so minutes, and the Drive-Bys are busy dissecting this, trying to analyze this. What does it really mean, because of course it can’t be what it says.  There’s gotta be something unstated here.  There has to be something going on. Is this woman falling on the sword for the Trump campaign? Did she really not do it, and instead saying she did it to try to take the heat off others.

Let me read the statement.  It’s not very long.  “To Whom It May Concern.”  And, by the way, there’s something very interesting in this statement.  You’ll hear it when I read it.  “To Whom It May Concern:  My name is Meredith McIver and I’m an in-house staff writer at the Trump Organization. I am also a longtime friend and admirer of the Trump family.

“In working with Melania Trump on her recent First Lady speech, we discussed many people who inspired her and messages she wanted to share with the American people. A person she has always liked is Michelle Obama. Over the phone, she read me some passages from Mrs. Obama’s speech as examples. I wrote them down and later included some of the phrasing in the draft that ultimately became the final speech. I did not check Mrs. Obama’s speeches.

“This was my mistake, and I feel terrible for the chaos I have caused Melania and the Trumps, as well as to Mrs. Obama. No harm was meant. Yesterday, I offered my resignation to Mr. Trump and the Trump family, but they rejected it. Mr. Trump told me that people make innocent mistakes and that we learn and grow from these experiences.

“I asked to put out this statement because I did not like seeing the way this was distracting from Mr. Trump’s historic campaign for president and Melania’s beautiful message and presentation. I apologize for the confusion and hysteria my mistake has caused. Today, more than ever, I am honored to work for such a great family. I personally admire the way Mr. Trump has handled this situation and I am grateful for his understanding. Sincerely, Meredith McIver.”

So the Drive-Bys are saying, “Well, now, wait just a second. There’s gotta be more to it than this,” they’re all speculating.  “It can’t just be this simple.  No, no, no, no, no.” And they immediately began to check something out.  I watched a couple these people at the top-of-the-hour break on CNN.  This line that Meredith McIver includes in her statement, “A person Melania has always liked is Michelle Obama.”

So that is ostensibly what happened.  The bottom line is that Melania Trump said she liked Michelle Obama and read the speechwriter some passages from Obama’s speech, Mrs. Obama’s speech, as examples, and the speechwriter wrote ’em down and did not go back and check the actual speeches Michelle Obama had given, thought she was hearing the words of Melania Trump, jotted ’em down, included them in the speech, and that was the mistake.  So that’s that.

The Drive-Bys are gonna be unhappy if this ends it.  Here’s audio sound bite number 32.  They don’t believe it yet.  They still think that Trump is gonna lose in a landslide.  And they’re struggling here with how to view what Trump’s doing on Melania’s speech.  This is CNN Inside Politics, John King speaking with Jonathan Martin from the New York Times.

KING:  Donald Trump’s a smart man.  He may operate outside of the rules.  He happens to be the Republican nominee for president.  And go back six months, and, you know, a lot of us were saying, “Come on, there’s no way he can pull this off.”  It’s the ideological party.  They’re coming out of the Tea Party (unintelligible).  He’s a smart man. So he knows if they stir this up today, the third day it’s gonna be dealt by this.  And he did it anyway.  What if he’s right, somehow?

MARTIN:  Then Democrats are gonna have a very tough four years, and there’s gonna be deep and lasting questions about how politics in America has changed.

RUSH:  Right on.  Donald Trump is a smart guy. He may operate outside of the rules, happens to be the nominee. Go back six months, a lot of us were saying, “Come on, no way he can pull this off.”  Remember, they were all thinking that he was just one ill-gotten statement away from imploding.  They thought it was gonna happen.  Everybody thought it was gonna happen.  And it didn’t, of course.

So now you’ve got the controversy over Melania plagiarizing Moochelle Obama, and everybody’s wondering, “Oh, is this it?  This has gotta be the end. This is another one of these big faux pas that they can’t possibly survive.”  And so they’re thinking maybe Trump’s doing this on purpose. They’re admitting they don’t know how to analyze this.  They’re admitting they don’t know how to look at this.

RUSH: Do you know that Michelle Obama plagiarized her speech from Elizabeth Dole? Yes.  You want to hear it?  Here we go, chronological order in reverse.  Melania Trump Monday night in Cleveland…

MELANIA: You work hard for what you want in life, and your word is your bond, and you do what you say and keep your promise.

MICHELLE:  You work hard for what you want in life, that your word is your bond, that you do what you say you’re gonna do.

RUSH:  And in 1996 in San Diego, Republican convention, Elizabeth Dole… 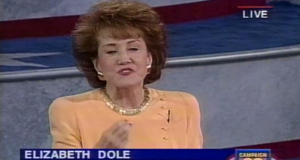 ELIZABETH:  Because they know he’s honest, trustworthy, a man of his word, his word is his bond, and they know he has exceptional leadership.

RUSH:  Well, not word-for-word, of course, but look how similar the statements are.  And, you know, this is what real people understand.  This is not… These are commonly expressed bromides. They are philosophy.  And there’s only so many ways to express them.  And there is no… Michelle Obama didn’t originate these words and therefore the whole notion of plagiarism, I think, ordinary people? No big deal.  They don’t see it.  They don’t understand what the big deal is.

RUSH: Here’s Mike in Cincinnati.  Welcome, sir.  Great to have you on the program today.  Hello.

CALLER:  How are you, Rush?

CALLER:  Good, good.  Love the show today.  Hey, what I wanted to say was going back to the Melania speech the other night. This is a typical example of the left taking really sweet, refreshing lemonade and doing what they always do and trying to turn it back into a lemon.  What Melania said is what good parents have been telling their kids, apparently all around the world.  Melania’s from Slovenia.  It’s nice to know that parents over in Slovenia and probably China and Africa and everywhere else tell their kids, “Hey, do these things. Work hard. Stick to your guns.”  You know, “Your word is your bond,” all this Golden Rule stuff. They want us to think that Michelle invented that? And, by the way, in Michelle’s defense, maybe her parents really did tell her that stuff.  The point is, this is great to know that there are people around the world teaching their kids to do these really good things.

RUSH:  That’s been my point all along.  Some of these things are so universal and time-honored. They are part of the human existence.

CALLER:  Yes.  That’s the point.  But these left-wing wackos — and I know way too many of them, by the way. I’m not gonna name names, but they want to just undo that and turn it negative.

“They’re victims, and so it sounds good for you, but…” I’ll tell you where I first really ran into this is back in the mid-eighties in Sacramento, and the homeless craze was just popping up all over everywhere, and I happened to be doing a speech somewhere, and I talked about how maybe the solution to homelessness is work. And crowd started booing and started shouting, “Easy for you to say!”

RUSH: And I said, “Wait a minute. If the whole concept of the work and providing for yourself has now become an example of bigotry, then where are we headed?”  And it is. It still is that way.  And so these time-honored virtues… These are what virtues are.  And virtues are part of humanity, no matter what part of the world you happen to be in.  And there are aspects of parenting.  Every parent, I don’t care where you are, wants a better life for your kids than you had for yourself, right?

RUSH:  I’m sure you’re shouting exceptions to me out there, where the father isn’t home or the mother isn’t home. But on balance, these are part of the human construction.  And to try to attach plagiarism to any of this is a losing proposition because

RUSH: Michelle Obama’s words, while poignant, were by no means unique.  Every parent in the world at one time or another has used them with their own kids.

CALLER:  And that’s exactly the point.  They’re trying to take of a really great message that we’ve all taught. I’ve taught my kids that.  My kids are doing phenomenally well.  All my friends teach their kids in so many words, in exactly those words sometimes, and they’re doing well.  You know, I wish more kids could hear it, and that’s what the left relies on: The fractured, miserable population. We’ve gotta help somehow. We’ve gotta get it right. But —

RUSH:  Look, there’s another reason why things like this are under assault by people on the left.  And you can smirk at this all you want, but Karl Marx — who was a blithering idiot and yet is revered as one of the greatest philosophers and thinkers of all time — was one of the original pollutants.  Karl Marx is one of the original agents of corruption of goodness and decency.  And Karl Marx believed that the family was the core element of capitalism and virtuous values.  And capitalism and virtuous values were the enemy of Marx’s philosophies.

I just checked the mail, and want to explain this. I just did a riff on climate change again, and I pointed out that there is no evidence of climate change other than natural, normal climate change that happens all the time.  It’s never static.  But there’s no data, except it’s just a bunch of computer models.  And somebody sent me an email.  “You know, you keep saying the same thing over and over. Maybe should try new tack.”  And it’s a good point.

What is the real problem?  Well, I’ll tell you what it is for me.  The real problem with people who believe in global warming is not that they believe in global warming.  Because people are always gonna be susceptible to the thing, particularly if they absolve them of any blame. And people are always gonna be searching for meaning in their life.  So if you tell somebody that they can save the planet by eating organic cow pellets or whatever, they’ll do it.

And if you precede this by telling them that they have participated in the destruction of the planet but that they can now redeem themselves and save the planet, there are a lot of very susceptible, emotionally primed people willing to fall for that.  The real problem, the real danger in things like climate change is that people are willing, time and time again, to turn over more and more of their lives to an ever-growing central authority to run everything.

That’s really the foundation of all of this stuff that is dangerous, not the individual beliefs that they have been agreeing with.