Cruz Couldn’t Pull Off a Reagan in ’76

RUSH: Let’s go back even further to the Grooveyard of Forgotten Hits, audio sound bites.  This is August 12th, 1980, in New York City at the Democrat National Convention and Teddy Kennedy. 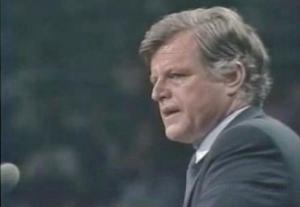 KENNEDY:  I congratulate President Carter on his victory here.  I am confident that the Democratic Party will reunite on the basis of Democratic principles and that together we will march towards a Democratic victory in 1980.  For me, a few hours ago, this campaign came to an end.  For all those whose cares have been our concern, the work goes on, the cause endures, the hope still lives, and the dream shall never die.

RUSH:  Translation: “Screw you, Carter!” So here, Jimmy Carter did not receive Ted Kennedy’s endorsement.  This was 1980. That was a great campaign.  I don’t know how many of you were old enough or even born, but there was a great moment in the ’80 campaign.  Jimmy Carter was a disaster, was an absolute disaster. He was so bad that Ted Kennedy thought that even he could be elected president.

Even with all of his Mary Jo Kopechne and Chappaquiddick Bridge, all of that, even he thought he could be elected president.  He granted an interview to the iconic Roger Mudd of CBS News who asked a very simple question every candidate gets.  “Senator, why do you want to be president?” Uhhhh.  Dream shall never die? Blah, blah.  Had no answer.  He had no answer, not even the slightest idea.  “What do you want to do when you become president?

“What do you think needs to be done?”  Blah, blah, blah.  No answer.  It was clear he’s campaigning for president ’cause he’s a Kennedy, and that was enough.  He didn’t have to have a reason beyond that.  He didn’t have to have an agenda beyond that, just the fact that his name was Kennedy.  Now, a lot of people are talking about Reagan and Ford 1976.  I was in Kansas City in 1976.  That convention… You think this was bad last night?

At that convention, they had fistfights that broke out on the floor!  It was at the Kemper Arena in Kansas City.  And there were fistfights.  Nelson Rockefeller was practically inebriated every night.  One night he got so mad, he walked out of there, went to an art gallery over at Plaza 3 and had dinner and said, “Screw it!”  I mean, they were throwing fits.  It was brutal in the ’76 convention in Kansas City.  I’m gonna take a break.  We’ll come back, have some sound bites.  It’s all about, did Reagan or did Reagan not endorse Ford in that.

REAGAN:  Mr. President, before you arrived tonight, these wonderful people here, when we came in, gave Nancy and myself a welcome. But that plus this — plus your kindness and generosity in honoring us by bringing us down here — will give us a memory that will live in our hearts forever.

RUSH:  You know what Reagan was talking about there?  He was the loser.  He’d lost.  He’d been invited to speak on the last night.  And, by the way, the speech that Reagan gave…  And this is what Cruz was trying to do last night which makes this even stranger.  Reagan’s speech, after having lost the primary — and he lost it on the convention floor. It was one of the last brokered, if you want to call it that, conventions that we’ve had.

Reagan’s speech was so good, everybody on the floor began to think they had nominated the wrong guy.  And that set Reagan up for 1980.  And all the prepub yesterday on Cruz said that’s what he was trying to do last night, that he wanted to deliver a speech that was Reaganesque in the sense that the delegates would walk out of there thinking that they should have nominated him.  He didn’t get there.  No matter what else, he didn’t get there.  One more from Reagan, Republican convention, ’76.

REAGAN:  This is our challenge, and this is why, here in this hall tonight, better than we’ve ever done before, we’ve gotta quit talking to each other and about each other and go out and communicate to the world that we may be fewer in numbers than we’ve ever been, but we carry the message they’re waiting for.  We must go forth from here united, determined that what a great general said a few years ago is true. “There is no substitute for victory.” Mr. President —

RUSH:  That’s what Cruz wanted to pull off last night.  That’s what everybody said, anyway.  That’s how you do it, Ronald Reagan ’76.  Ernie in Warrenton, Virginia.  You’re next as we head back to the phones quickly.  Great to have you with us.  Hello.

CALLER:  Thank you, Rush.  I appreciate you taking time to listen to me.  I think Ted Cruz could have shown himself a better man last night.  He claims to be a Christian, and as a Christian we’re supposed to love each other. And with all the stuff that’s going on in this world, he could have been a very good example to the whole world that, by forgiving Trump, it would have sent a message to the world that we can press on and it’s more than just our feelings and our emotions. But we’re supposed to be showing love, and that’s what he should have done.

RUSH:  Yeah.  It’s a good way of putting it.  I think that’s what a lot of people expected.  Remember, there was a lot of hype about Cruz’s speech yesterday.  It was all over the place in the media. One of the biggest questions: “Is he gonna endorse? Is he gonna endorse?”  But the Cruz people had spoken to some in the media who are out there pre-publicizing Cruz’s speech, and they actually said, “Is there gonna be an attempt here to replicate — in Cruz’s own words, with his own personality — what Reagan had pulled off in 1976?” which was to realize Ford had won and move on.