RUSH:  I was misinformed out there.  It’s not Kasich who is saying that he was never offered the job.  It was the Trump campaign saying that they did not offer the job.  So the New York Times story has not been out and out denied.  The original New York Times Magazine story was that the Trump campaign, Trump’s son went to Kasich, and said, “You can run it all, domestic, foreign policy, we want you to be VP.”

And then a bunch of media ran with that as proof that Trump really doesn’t want to do this, just wants the glory, just wants to sit in the Oval Office and be thought of as the big guy, but doesn’t actually want to do all the work, and they’re saying, “We told you so,” da-da-da-da. And the first version was that Kasich said, “Nobody ever talked to me,” but that’s not the way it happened.

Apparently it’s Trump who is now denying that Kasich was ever offered the job.  And it was confusion over poorly crafted and written headlines that caused the confusion.  This report is from yesterday anyway, and it hasn’t gotten a lot of traction, not a whole lot of people have been talking about it beyond some the blog reaction.

RUSH: Now, here we go.  Suffolk University poll of Ohio.  “As Donald Trump and the Republican delegates prepare to close out their party convention in Cleveland, a new Suffolk University poll of Ohio voters shows the race a dead heat in the Buckeye State, with Democrat Hillary Clinton and Republican Donald Trump tied at 44 percent and 11 percent undecided.” However, the favorables and unfavorables are not that good for either of them, but they are worse for Trump.

“Both Clinton and Trump are viewed unfavorably by a majority of voters, with Clinton looked on favorably be 41 percent of likely Ohio voters and unfavorably by 51 percent, while Trump had a 38 percent favorable and 53 percent unfavorable rating.”  So margin of error on that.  However, this is where it becomes troublesome.

“In a four-way scenario, with Green Party nominee Jill Stein and Libertarian Gary Johnson added into the mix, Clinton edges Trump 43 percent to 39 percent in Ohio, with Johnson getting 5 percent, Stein 1 percent and 12 percent undecided.”

So here we go, third-party candidates are gonna gum up the works here if they actually run.  Is it definite Gary Johnson’s in?  Oh, yeah, the Libertarian candidate.  Well, here in Ohio, again, that poll, if it’s just Trump and Hillary straight up, it’s 44-44 with 11 undecided.  Four way, it’s Trump 39, Clinton 43, four-point spread, still margin of error, but the third-party candidates getting a total of 6%, Johnson five, and Jill Stein one.

Okay, Trump is getting a post… Well, it’s not post yet.  He’s getting a convention bump in the national poll at Reuters.  “Donald Trump is enjoying a mid-convention bump in the polls, surging to within striking distance of Hillary Clinton in a national survey released just today.” This is the Reuters/Ipsos rolling national poll.  It “includes data reflected from three out of the first four days of the convention.  It shows Clinton leading Trump by four, 40-36, closer than the same poll found just a week ago when Clinton led by 15.” Now, Clinton hasn’t been ahead by 15 in I don’t know how long, but you’re always gonna have outlier polls.

RUSH:  The campaign manager for Ted Cruz… Get this, now: Cruz’s campaign manager is a guy named Jeff Roe.  And he really, really went after Chris Christie today, accusing him of having “no political testicles in a radio interview.  BuzzFeed first reported on the comments made on a [the show’s not mentioned] radio show after audio was played of comments that Christie made Wednesday talking about Cruz.  Christie said, ‘I thought it was awful of Cruz’s speech, and I thought it was selfish.

“‘He signed a pledge, and it’s his job to keep his word.'”  So Cruz’s campaign manager, Jeff Roe said, “This guy turned over his political testicles long ago. So I don’t take what he has to say with any meaning. You know, he embarrassed himself pretty quickly in this.  Let’s just go through history here and time. Ted didn’t sign a pledge. He didn’t sign a pledge to support a nominee by convention. You know, this speech went further than Ronald Reagan went on Gerald Ford. It went further than Kennedy did for Carter.” 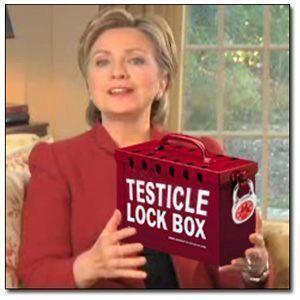 And get this now.  This is from Mediaite.  I’m just gonna read what this says.  “Some reports indicate that Christie has been relegated to fetching fast food for Trump.”  Well, I’m just telling you what it says.  I know I find that very hard to believe.  But that’s what the… It’s Mediaite. (interruption) Yeah, Christie wants the AG job.  What’s that got to do with anything?  Where’d that come from?  Are you kidding me?  If he wants the AG job and Trump says, “I want a Whopper,” do you think Christie wouldn’t go get one?  (laughing)

Chris Christie walking into Burger King ordering a Whopper for Trump and having to take it back to where Trump is?  When you see these assertions, these stories, they’re, like, “Wow.”  But then you visualize it, it becomes really tough to believe.  So where are they?  Okay, let’s say they are at Mar-a-Lago, and Trump decides — despite the fact he’s got 15 chefs running around — he wants a Whopper.  So he buzzes Christie.  Christie comes in.

So Christie leaves Mar-a-Lago, gets in a car somewhere, finds on a map where the nearest Burger King is, drives over there, goes through the drive-through or walks in and says, “Hi, I need a I need a Whopper with everything,” and it doesn’t get reported?  You think Chris Christie walking into a Burger King and getting a Whopper would not be reported?  (laughing)  They assert it here.

RUSH: You know, Newt was great last night, Newt’s speech. You know who else did a good speech last night?  Laura Ingraham.  Laura Ingraham did a fabulous speech.  She was on for like 17 minutes right at nine o’clock.

And I thought Fox, you know, she works at Fox, I thought Fox would pull away and cover some of it, but they didn’t. (interruption) The African-American — yeah, that minister, he was speaking twice.  Trump has that guy speaking twice at this convention.  But, you know, Laura told her family story, which I’m sure shocked a lot of people. That her mother made her clothes. That her mother was still waiting tables up to age 73, from New England and so forth.

But she did just a fabulous endorsement of Trump, and she called out the media.  Which brought the house down.  She’s pointing to all the booths, the NBC, the CBS, the ABC booths, and she’s letting them know that we all know that they’re in the tank for Hillary, and she’s basically calling them out to be honest and so forth.  But you know what they’ve done to her?  This happened to me, by the way, and I knew it was gonna happen when I watched this last night. I knew it was gonna happen, ’cause it happened to me.

When I was on the Phil Donahue show the first time, which was circa 1990, I walked out, they introduced me, I walked out and I started waving. I waved to the crowd.  The next day there is a still shot, a still shot of my wave looking like a Nazi salute.  And ever since that happened, whenever I’m in public, I make sure to bend the elbow, to this day, ’cause I know what these clowns in the media will do with this.  And they did it to her.

In the New York Post they have a giant picture. The speech that she gave was tremendous, and it’s been reduced to a picture with a headline that says something like: She certainly didn’t want this to happen.  And every tweet that they report, and the New York Post is about reaction to that still shot, nothing to do with the content of her speech.  I don’t have it in front of me, I wish I have the actual headline that they used to go along with the picture.

But when I saw her last night waving… once something happens to you one time, it’s all it takes.  You know, intelligence guided by experience dealing with these clowns in the media.  And this is a photo editor doing this.  So they take a still shot of video and maybe there was a camera that was grabbing — no, no.  It was a still shot because the RNC TV bug was in the lower right-hand corner, so it was TV, just took a still shot from the side that made her look like she was doing heil Hitler, and they do this every chance they can get with a Republican or conservative.

But she hit a home run.  It was a perfect endorsement of Trump.  I just read that she offered her speaking slot to Kasich and that he turned that down.  ‘Cause everybody thinks that he ought to be there. You know, Ohio is an important state.

Why Is Kasich Mad?

Why in the world is he not showing up?  Has he said?  So everybody is left to assume that he’s got some big problem with Trump.  Well, you talk about childish sour grapes.  It’s his state.  The Republican National Committee goes to his state, brings whatever economic influx there is to the city of Cleveland, and he doesn’t show up ’cause he’s got his nose out of joint. (interruption) Okay, big whoop.  So he went to an event one mile away.  Okay, even better.