RUSH: “Three-Quarters of Americans Felt ‘Positive’ About Donald Trump’s Convention Speech, After the Mogul Painted a Dark Portrait of the Nation’s Problems and Cast Himself as the Man to Fix Them.”

Grab audio sound bite number four and number five.  You can hear this, CNN, the disconnect on display, CNN anchors shocked and dismayed that an instant poll showed their viewers liked Trump’s speech.

DAVID CHALIAN: It is, but before we get to that news, I just want to give a couple caveats of what this is.  This is a poll of speech watchers. This is not representative of all Americans as we normally talk about polling.  So this is people who tuned in.  The next thing you need to know is, people who tune in to a Republican convention to hear the Republican nominee are predominantly Republican.  So speech watchers.  It’s like when we do the president’s State of the Union address, they predisposed to like what they are tuning in to see.

RUSH:  Okay, did you ever hear them precede poll results like that?  You never do.  This is David Chalian, and what he’s saying is, look, the news I have for you is not good but don’t sweat it, it’s just a bunch of wackos.  It’s a bunch of wacko Republicans who watch the speech. It’s a bunch of wacko Republicans who expect this kind of stuff to be said.  It’s not the real America. It’s not the real American people, not as we think of in other polls.  This is just a poll of Republican watchers.  This is wackos, this is fruitcakes, this is nutcases responding to their leader nutcase.  Don’t worry about it.  But here are the numbers. 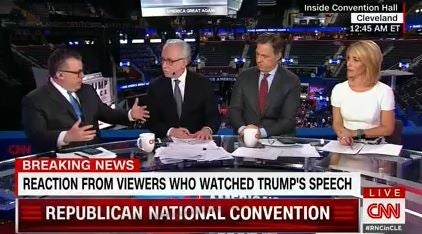 RUSH:  But don’t worry, CNN viewers, because that’s just these wacko Republicans.  Remember, that’s just speech watchers, not real Americans out there, not like you and me.  So they had to precede all this.  This is devastating news.  They got 75% either positive or somewhat positive, but you know what they’re saying at CNN?  It may be 75 now, but wait ’til Monday when we get through with this.  By the time we talk people down on this Trump will be lucky to be over 50% after that stupid speech after we destroy him on it.  That’s what they’re working on now.