RUSH:  How many speeches do you think there were last night?  There were 61.  Sixty-one speeches and not a one of them mentioned terrorism, ISIS, Daesh, not a one.  They claim that’s coming later.  They claim, well, we got a different theme every night.  Tonight our theme is adultery.  Bill Clinton doing the keynote. I mean, tonight the theme is — well, they’re gonna do some theme tonight. They’ll get to national security at some point.

Greetings, folks.  How are you?  Great to have you with us.  Rush Limbaugh here once again ready to execute broadcast excellence as we meet and surpass all audience expectations.  Telephone number, if you want to be on the program is 800-282-2882.

The reason I mentioned 61 speeches and not a word about terrorism or ISIS is that an elderly priest, 86, was beheaded in his church in Normandy today in France by two ISIS knifemen shouting, “Daesh!” after they took nuns and worshipers hostage at the French church.  Police then shot both the attackers dead, began the search for bombs.

I mention all of this because that’s insanity, to suggest that air-conditioning poses as great a threat as ISIS or militant Islamic terrorism or any other kind of terrorism, but that’s what we get from the Democrat Party.

Now, folks, I want to try to share an observation here with you.  I watched the Democrat convention, I watch all of these kind of things that we saw last night, like this year’s convention.  I watch them now with a different perspective than I used to.  I used to watch these and gather material that I could use to be funny, to be informative, to be entertaining, while at the same time condemning what I thought was worth being condemned that might be said or was said at any of these conventions.  But the central focus was to laugh at it, it’s so ridiculous.  What we hear from the modern Democrat Party is ridiculous.

But, as I say, I now watch with a different perspective.  I watch with a lot of sadness.  I watch this lunacy that we saw last night, and if you didn’t watch it, don’t worry, you’ll get enough of a flavor for it after I finish the program today. You’ll know.  It was sheer lunacy.  A lot of it was delusional and deranged.  A lot of it was unhinged.  The reason that I watch it with sadness is the realization now that close to 50% of the people in this country who vote eat it up.

They love it.  They applaud it.  They think that it is great.  There’s no critical thinking.  If there were critical thinking, the Democrats wouldn’t get out of that city with 10%, 20% of the vote, ’cause everything is so contradictory.  So it’s with a different lens that I watch these things now, and it’s with a different style, shall you say, that I tell you about what I saw.  I used to confidently laugh. I used to believe that nowhere near a majority of people are gonna fall for the garbage that makes up a Democrat convention and what you hear from the podium.  It isn’t the case anymore.

The Democrat convention, it was exactly as I predicted last night.  We got speaker after speaker, picture after picture ultimately of doom and gloom of misery and suffering.  We had people praising the sitting president for being remarkable in his successes while at the same time detailing everything wrong and horrible in this country, and they happen to be the same things the current president detailed as horribly wrong at both of his conventions, in 2008 and 2012.

I had to sit through the specter of speaker after speaker after speaker tell everybody what’s wrong and how they have no hope and no chance unless some of the people in that room happen to be elected to office.  What a message.  You’re lost, you’re hopeless, you’re aimless, you got nothing unless we win elections.  And these people are applauding it and eating it up, and here we are seven-and-a-half years into the very destructive Barack Obama administration, and that’s acknowledged.  Speaker after speaker unwittingly acknowledges the decline that has happened to this country, although they don’t of course attach that to Obama.

I mean, it was the same thing recycled that I have heard every convention. But I have to say to myself as I watched this, the ways that I have chosen to deal with this maybe have not been the most effective ways of dealing with it because the number of people that buy into it seems to be growing.  The number of people that buy into this abject dystopia that was on display last night seems to be growing.  The explanation has to be psychological.

People that vote Democrat are some of the most depressed people you’ll run into.  They’re some of the angriest people you’ll run into, despite — in these last 7-1/2 years — getting everything they want, everything they thought would lead them to their utopia.  But by their own admission at their own convention last night, they’re no closer to utopia than they’ve ever been.  And they’re never gonna get there because it isn’t possible.

If the Republicans are the sole factor in all of the decline and the misery, then why don’t the Democrats just get rid of them?  But they don’t.  The Republicans are still there, despite being the problem, despite being the explanation.  Picture after picture.  I mean, some of these speakers try to dress it up.  Cory Booker tried to be Barack Obama of 2004 last night, but he didn’t pull it off.  Did any of you in there watch? I have to ask. Did you watch this? (interruption) Good.  I don’t blame you.   Snerdley, you did?

All right, so you did…? (interruption) Well, I’m not gonna play… I don’t have a lot of Cory Booker, but the guy went way too long. Talk about Trump shouting? This guy shouted everything, and he was trying to be as uplifting and positive.  He was redefining the purpose of the Declaration of Independence.  “It’s really a declaration of interdependence,” because, you know, that means nobody can do it on their own.  While talking about the greatness of the Founders, he then proceeded to destroy the concept of rugged individualism.

The theme of the night last night: “You can’t do anything on your own; we can only do everything together.  You can’t do a thing on your own.  You might get somewhere on your own, but you can’t go far.  You can go fast by yourself, you can go fast on your own, but you can’t go all the way.  You can only get there together.”  Brought the house down.  “Yaaaay!”  I’m sitting there saying, “This is gobbledygook.”  This is the kind of stuff that 17-year-old girls used to find in calendars and post on the bedroom wall, and now it’s substance at the Democrat National Convention.” 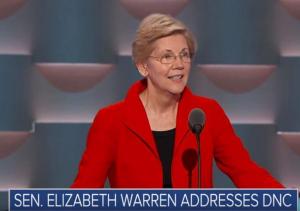 They were Bernie supporters.  I didn’t hear it at first.  They don’t closed-caption what the audience says if there’s any hecklers, and I’m watching… Of course, I have to listen with my cochlear implant so I just thought it was crowd noise.  I can’t distinguish boos from applause.  I have to know which is which in order to hear it, like the Debbie BS sound bites yesterday.  To me, it was indistinguishable.  Somebody told me they were booing her; then I knew.

It wasn’t until this morning that I found out that she was being heckled last night, and it’s not because the Drive-Bys told anybody.  In fact, Andrea Mitchell, NBC News, Washington, pointed out today (you’ll hear this coming up) that Elizabeth Warren did not have the room captivated.  She said 40% of the crowd was sitting on its hands last night, and F. Chuck Todd came along and upbraided her.  F. Chuck Todd said (paraphrased), “You’re not supposed to give it away like that,” and F. Chuck Todd said, “The people at home didn’t see it that way.

“And that’s what we report is what the people at home saw.”  But it wasn’t unity in there last night.  And there wasn’t any particular happiness in there last night.  And… Well, I don’t know.  There might have been happiness the way these people define it.  I mean, who knows?  You’ve heard the concept “happily miserable”?  I think that was this room last night — or what is it, “miserably happy”?  I forget which it is.  Before the convention began, our favorite congressman from Georgia, Hank Johnson…

This is the guy who worried that Guam might be swallowed by the Pacific Ocean because too many people lived on one side of the island and they might tip it into the ocean or something like this. I forget.  Hank Johnson said… He compared Israeli settlers to termites.  The American flag was not on display last night.  You could not see it.  In fact, I don’t think… I’ll have to double-check, but I think the color red was not seen on camera last night.  There were various shades of blue and gold and mauve.

But red — which, of course, identifies the Tea Party, the Republican Party.  I don’t think… Even in the TV sets, I don’t think there was any red.  Now, some of the people wore red or pink, but the Palestinian flag was raised in the audience at the Democrat National Convention; the American flag wasn’t.  Palestinian flag.  There was one other crazy, wacko flag that was parading around.