Democrats in Philadelphia Boo and Heckle When Mrs. Clinton Is Mentioned

RUSH: Anybody else notice, by the way — I noticed this because I was getting itchy. It was getting time to take the dogs out, and I was having to make a decision: Wait for Bernie or take the dogs out.  I looked, it was almost 11 o’clock and Bernie still wasn’t on.  And then I realized and I chuckled.  I said, “They’re still dissing the poor guy!”  He’s the prime time speaker, 10 to 11 o’clock. By 11 o’clock the Democrats that are usually gonna watch this, they’re either stoned, toked or in bed or something else.

I mean, you would think Bernie’s gonna be up at 10:15 or 10:30.  But they waited until 10:55 to get Bernie out there. And then the applause for Bernie and the delays before he was speaking, that took another seven or eight minutes.  Three-minute standing ovation and four minutes of him saying, “Thank you, thank you, thank you,” trying to get ’em to shut up.  So Bernie didn’t really start talking ’til after 11 o’clock.  Other than Monday Night Football, that’s Death Valley.

You’ll notice the Republican convention, it was done by 11.  They never waited ’til 11 o’clock to get somebody they really wanted you to hear on the stage.  I think they dissed him again last night.  I think they just dragged that whole thing out hoping that by the time he got on his supporters would be run ragged, out of energy. It was hot, even with the air-conditioning, it had rained, forcing the media out of their tent, by the way.  Protests, they’d spent a lot of energy yesterday.  And I think that they were doing their best to just make sure that the energy for Bernie was as little as they can manufacture it.

WOMAN:  We have an opportunity, O God, to give undeniable evidence of our commitment to justice and equality by nominating Hillary Rodham Clinton as our candidate.  (cheers)

RUSH: It’s a prayer, an invocation.

WOMAN:  As our candidate for the highest office in the land.  God, you have given us wisdom.  Now give us courage for the facing of this hour.

RUSH:  They’re all shouting, “Bernie, Bernie, Bernie” during the prayer. Not Hillary, Hillary, Hillary.  Bernie, Bernie, Bernie.  Now, here’s what I referred to you earlier.  This is Elizabeth Warren.  She got heckled.  But you might not have known this watching this last night.  I don’t know how easy it was — could you tell that they were booing her?  (interruption) See, that’s it.  I had no prayer ’cause of my cochlear implant hearing, and they don’t close caption protestors and applause and that kind of stuff, so I had no idea.

I knew there was a ruckus. I knew something was being said.  It wasn’t until this morning that I found out it was a bunch of Bernie people shouting at her, “We trusted you! We trusted you!”  They think she sold out.  Well, she did sell out.  She did sell out, sidling up to Hillary.  Here’s how this sounded.

WARREN:  You know, for me, this choice is personal.  It’s about who we are as a people.  It’s about what kind of a country we want to be. (protestors chanting: “We trusted you!”)

RUSH:  Yeah.  I’ll tell you something else.  The Democrat, the media review of Fauxcahontas’ speech is not good.  Watching it I thought she was doing her typically really rousing, good job.  I read what Democrats thought of it today, and they thought she gave it a 60% effort.  She gave it a half-assed effort.  It wasn’t anywhere near her best. She wasn’t really into it, which just means I haven’t seen a whole lot of Elizabeth Warren speeches, but she got heckled.  “We trusted you!”

Now, here’s Bernie — this was after a lot of people’s bedtime — finally pulling the trigger and telling everybody they’ve gotta bite the bullet and support Hillary.

SANDERS:  By these measures, any objective observer will conclude that, based on her ideas and her leadership, Hillary Clinton must become the next president of the United States.  (cheers and boos)

RUSH:  We got 29 seconds of boos here.  There are so many upset Democrats.  I read two different commentators today accusing Bernie Sanders of plagiarizing himself, that here he has the biggest audience he’s ever had, and he didn’t do an original speech.  He just gave a speech that he’s given time and time again before, and they’re claiming he phoned it in.

CALLER:  Thank you.  What an honor.  I just want to say something if I can take five or 10 seconds. I’ve always thought something about you, and I never hear anyone else say it, but as a speech language pathologist I have to say I am in awe of how, after having received cochlear implants, that you continue, not only do you continue to work in radio, but are at the top of your game. Most people don’t appreciate how amazing and how unlikely that is, but I do, and I deeply respect your hard work and your commitment.

RUSH:  Thank you very much.  I’m moved by that.  I appreciate that.  I really do.

RUSH:  ‘Cause you’re right, you’re right.  So I’m profoundly appreciative of your comment.  Very much so.

CALLER:  Well, it’s an honor to speak with you.  And I just want to talk about what I’ve seen on the news after the RNC and after the DNC, the news — when I watched the RNC, I saw an organized, extremely well-done event, high energy. I thought it was pretty cohesive after the first day, after the first moments of the first day, it was positive.  It was so warm.  I just came away from that with a great feeling.  But when I look at the news, it was anything but positive.  Politico said it was the worst convention ever. People said that Trump was negative and that, you know, the Bernie people will never vote for him now and things like that.

RUSH:  It was foreboding.

CALLER:  Yes, foreboding.  Somber.  But then last night I watched, held my nose, took one for the team, my friends, and watched the DNC.  And it was laughable.  It was disorganized. It was poorly planned.  There were constant booing and jeering and you’ve played some of that, and it was loud.  I don’t have any hearing issues.  I could hear everybody booing.  So you might not have heard it as loudly, but it was loud and clear, especially with Elizabeth Warren, and, “We trusted you! We trusted you!” It was a guy with a pretty deep voice yelling that.

All of the speeches were all over the place.  There was no cohesion.  Trump, for example, organized his event in four days with the first day being Keep America Safe. The second day was Make America One, Make America First, then Make America Great Again.  And this DNC had speakers who were just randomly speaking all over the place. Even within a speech, one speaker would say something that didn’t tie in with what they had just said or what they were about to say.  It was just all over —

RUSH:  You know, that is a brilliant and shrewd observation of yours.  There were 61 speeches.  Now, they did have a theme, once they got to Cory Booker, they did have their theme, and that is everybody together versus nobody alone. Togetherness was their theme, unity and all that.

But you’re right, they gave 61 people a chance to speak last night, and it basically was payback, payback night for all of the people that they needed to go pay back for doing helpful things during the year.  Okay, Anastash, you get five minutes. You want to go out and trash the Republicans, go do it. It was just never ending, 61 different speeches.  I thought if you want dark, you got it last night.

RUSH:  If you want a dystopian, if you want a doom and gloom.  And the thing about that is, Bridget, after seven-and-a-half years of them running the show, they still couldn’t help themselves and they have to portray this country as so low when you look up you see the gutter.

RUSH:  By the way, I just saw a picture.  There are more American flags than you can count being deployed around that podium right now.

RUSH:  I think somebody forget it.

RUSH:  It’s either that, either somebody forget or it was a purposeful thing last night not to do it so as not to offend certain factions or groups inside that hall.

CALLER:  But they let the Palestinian flag fly.

RUSH:  Oh, yeah.  And outside at a protest march the Russian flag flew.

CALLER:  And the LGBT flag was all over. The rainbow flag was everywhere as well.  And the moment that they had Sarah Silverman and Al Franken speak, they could have done something great with that, but instead they left them stalling up there.

RUSH:  Well, look, in their defense, and it’s very magnanimous of me to come to their defense, ’cause it’s two reprobates, but Paul Simon was having trouble setting up.

CALLER:  And he had trouble singing.  Did you hear him?

RUSH:  To me it sounded like he was having voice problems.  It just sounded horrible.  I couldn’t tell what the song was. I knew it was Bridge Over Troubled Water, but it didn’t sound like that to me.

CALLER:  It didn’t sound much like Paul Simon used to, I can guarantee you that, because I’m 42, I grew up listening to a lot of the seventies and early eighties music. 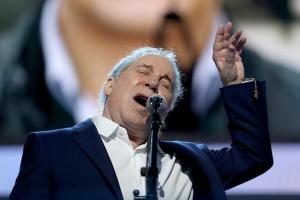 RUSH:  He looked really tired to me, Bridget.

RUSH:  His eyes were bloodshot and watery and they were late getting set up and so those two reprobates had to vamp and fill. You would think they would be competent in doing that, but they weren’t.

CALLER:  They were even kind of arguing with each other up there.  Did you notice that?  She was kind of insulting him and said, “Oh, Lord” at one point, making fun of him, something he had said, she said, “Oh, Lord.”  So they can’t even get along amongst themselves.

CALLER:  I think that’s giving her a compliment, because she’s actually one of the most vulgar people to ever —

RUSH:  She is.  She is one of the most vulgar people, that’s true.

RUSH:  Well, some of them do.  Some of them admire ’em.  There’s no question.  Bridget, I appreciate the call, I really do, and I thank you for your astute observation, very much appreciate it.