Will We See Wonder Woman Tonight?

RUSH: Doug Schoen was on Fox News Hannity last night.  This is a quick bite, goes by in six seconds.  This is after Obama’s speech and Hannity said, “Okay, I watched Joe Biden say that Donald Trump is known for ‘You’re fired.'”  Oh, this is another great example of what I’m talking about.

But first the sound bite.  Hannity says to Doug Schoen, Democrat pollster, Democrat consultant from the past, he says, “I watched Joe Biden say that Donald Trump is known for ‘You’re fired,’ and I’m thinking tens of millions in poverty and out of the labor force, the president bragging that the unemployment rate is down.  Sure, if you don’t include the chronically unemployed.” 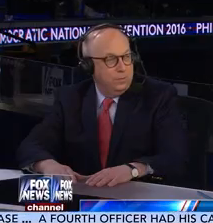 SCHOEN:  If this election is a referendum on the incumbent or Secretary Clinton, she will lose.

RUSH:  Wait a minute.  What was that?  If this election’s a referendum on the incumbent — that would be Obama — or Secretary Clinton, she will lose.  You know what that means, right?  What Schoen is saying, they’re gonna have to find a way to destroy Trump, because Hillary doesn’t have it in her to draw a bigger crowd than she’s already got on her own, and she doesn’t.

Folks, the polling data, that USC/US gov dot poll that I’ve been highlighting for a couple days, Trump went up against last night.  He now has a seven — it’s 47 to 40.3 so it’s a 6.7 percentage-point lead over Hillary.  He has gone up like a half a point to a point every night this week.  This is the poll that has 3,000 respondents, and their tag line is: 95% certainty that our poll is accurate.  That’s just the way they characterize it.  It’s an ongoing poll of 3,000 and 400 of them are constant.  Four hundred of the 3,000 are constant.  And her negatives, her un-likability or what is it, untrustworthy, 68%.

And you go look at this convention, you look at all of the testimonials that she’s had and all of the accolades.  And, of course, it doesn’t matter, it’s like last night before Obama’s speech, they brought out a secret weapon.  They brought out an aging woman who turned out to be a gold star mother.  They normally associate those with pro-military types, which you don’t assume Obama is.  And this woman just launched into one of the greatest testimonials of how great Obama is, and she said something like, “I wish you could all hug him like I have so you could feel his heart beating next to yours.”  I go, gag me.

Well, that kind of stuff has been said about Hillary Clinton all week, but it doesn’t matter.  She’s gotta live up to it tonight, and she’s been in public life 30 years.  Why do we not know of all of these good works already by virtue of them having happened?  If presidential elections were decided by who has the most spokespeople, yeah, you might be worried, ’cause Hillary’s had a whole slew of people out there telling us how great she is.

But I meant it when I asked Dinesh D’Souza earlier today, how in the world does she live up to all this, just from a performance standpoint, just the speech that’s as good, as electrifying, as moving as those that have preceded her.  Forget the content, just the emotional connection these speakers have made with that audience, how does she do it?

I think I know how she’s gonna do it, or try.  The first thing we’re gonna get, this video.  And it’ll be a video of things that we haven’t seen of Hillary before that we’re told happen all the time, Hillary just doesn’t brag, Hillary is not one who talks about things, Hillary does things, some such pap.  And you better be prepared to be overloaded with children in this video.

Marian Wright Edelman will be in there, the Children’s Defense Fund, and it’s just gonna be… By the time that film’s over, you’re gonna think that most kids in America don’t have parents and most of those kids that don’t have parents have been living or been taken care of by Hillary Clinton.  That’s what they’re gonna have to do.  They’re gonna have to, and there might be… I don’t know if they’ll do footage from Haiti.  You know, that could open some worms, because the Clintons stole — I say.

RUSH:  Okay.  So here is my serious question.  We have had three nights of the Democrat convention painting a picture and telling stories of Superwoman, Wonder Woman.  And the Hillary Clinton we know doesn’t live up to any of this.  This is not a put-down.  In this case, it isn’t.  I am very curious to see how she and they meet the expectation they have set up for her tonight. I’ll be fascinated to see how they do it and if they pull it off.