Jake Tapper and Dana Bash on Conservatives and Mrs. Clinton

RUSH: Jake Tapper, and he’s talking about what surprises him.  He’s speaking with the political correspondent, Dana Bash, about conservative reaction to Hillary’s speech.

TAPPER:  One reaction that I’m noticing online is conservatives who really liked it.  Jonah Goldberg, he wrote, “Why this convention is better, it’s about loving America.  The Republican convention was about loving Trump.”  And then I got a private message from a conservative who shall remain nameless who said, “I agree with zero percent of Hillary’s policies, but I strongly believe that she is more right about what America is as a country, or at least ought to be.”  These are people who I had never heard say anything nice about Hillary Clinton or Bill Clinton, and they are just identifying more with the America presented by the Democrats, and I’m just… I’m stunned.

BASH:  Just to add to that, Rich Galen, who worked for Newt Gingrich, tweeted that he said he was sitting in his kitchen crying watching the speeches here.  And he said, “What happened to my GOP?”

RUSH:  Okay.  So what do you make of that, folks?  You want me to run through this again here?  I’m not gonna play the bite.  I will just tell you what he said.  Jake Tapper, CNN, he says that he was scouring conservative sites for conservative reaction to Hillary’s speech, and he found Jonah Goldberg, National Review Online, who wrote why this convention is better.  It’s about loving America; Republican convention was about loving Trump.  Is that right?

Daniel Greenfield writing at Front Page magazine — that’s David — why am I having mental blocks on names today?  He does the restoration weekend here every November.  Horowitz.  Yeah, Daniel Greenfield, here’s the headline to the piece:  “Welcome to the Communist Party, U.S.A. — How Hillary’s scary speech revealed her mistake in wearing a white pants suit to her coronation.” 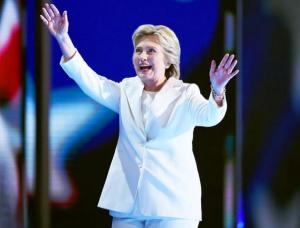 Let me give you some pull quotes.  Now, this is a conservative just like Jonah Goldberg is, but his take is: “This wasn’t a convention. It was a series of character witnesses for a woman with no character. It was an extensive apology for the Left’s radical agenda cloaked in fake patriotism and celebrity adulation.”  Okay, but we have conservatives out there — I think it’s ’cause they just can’t stand Trump.  I mean, there’s a whole lot of reasons for this. (interruption) I know we respond to appeals to patriotism.  Learned opinion and commentary writers are supposed to not fall for these tricks and make it look legit.  The Democrats, that was a show last night.  That’s not who they are.  You may see ’em waving flags for the next week or so to carry forth here.  They may think they’ve stumbled on a theme that Trump is dark and dystopian.  They’re the dystopianians, for crying out loud.

Another pull quote from Daniel Greenfield.  “The radical agenda of the Left was clumsily cloaked in references to the Founding Fathers. The same group of people whose names the Left want to see ground into the dirt. Hillary’s call for collectivism, the insistence that none of us can do anything as individuals, was dressed up in E Pluribus Unum and the Founding Fathers.”

Another pull quote. “This was a speech that could have been given in Moscow during the Cold War. Instead it was delivered to an enthusiastic audience of Democrats who love the idea of taking away someone else’s money. Beneath all the distractions, the celebrities and family stories, is the fundamental idea that Hillary has more of a right to your money than you do because she is ‘humbly’ more enlightened than you are. 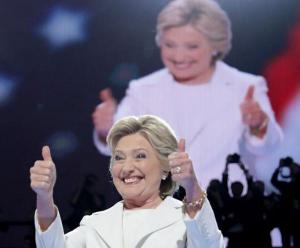 “There’s a name for that ideology. It comes with a hammer and sickle, with the color red, with gulags and firing squads, with little red books and big black prisons, and the death of the human soul. Hillary made a mistake by wearing a white pants suit to her coronation. She should have worn red.”

That’s Daniel Greenberg at Front Page magazine.  That’s his review.  But over here Jake Tapper says that he read Jonah Goldberg say the Democrat convention is better.  It’s about loving America.  The Republican convention was about loving Trump.  Then Goldberg says that he got a private message from a conservative who wanted to remain anonymous who told him, quote, “I agree with zero percent of Hillary’s policies, but I strongly believe that she is more right about what America is as a country, or at least ought to be, than Trump.”

Jake Tapper then said, “These are people who I have never heard say anything nice about Hillary Clinton or Bill Clinton, and they’re just identifying more with America presented by the Democrats, and I’m just stunned.”  In one night.  I think I know exactly what’s going on.  This kind of reaction, in one night of a phony night?  I know they would say, “Phony or not, Rush, they pulled it off.  They’re the ones waving the flag and they’re the ones singing, ‘USA, USA.'”

Never mind the fact that earlier in the week — and this was tweated by Shannon Bream of Fox News.  I mentioned this in the first hour, I want to repeat it again.  Whenever everybody started chanting “USA, USA,” various people at the Democrat convention told ’em to shut up, that that’s a Trump slogan.  We can’t say that.  That’s Trump slogan.

So they would say, “Rush, they may be phonies, but they made it look like they love America more than Trump did.”  That’s their story and they’re gonna stick with it.  And then finally, it was Dana Bash who said that she saw a tweet from Rich Galen who used to work for Newt, and he tweeted that he was sitting in his kitchen crying watching the speeches at the Democrat convention asking, “What happened to my GOP?”

Well, let’s go to the Kimberley Strassel at the Wall Street Journal.  “Hillary’s One-Candidate Race.”  Her theory is that Hillary is really running against herself. Let me give you a couple of pull quotes here.  “This November is about whether Americans can look at 40 years of Clinton chicanery and nearly a decade of broken Obama promises, and still pull the lever for her.”

Speaking of which, here we have… To show you again this divided country — we’re really two different countries here, just to illustrate it again — not that you need to it, but I want to.  So, on the one hand here, we have Hillary Clinton, who has committed crimes, as detailed by the director of the FBI.  He spelled them out.  She trafficked in classified documents.  She had an illegal server. So everything about it was illegal, we were told.

“Just can’t indict, though, because we couldn’t find that she knew what she was doing and had any intent to do it.”  Intent? The intent was there by just putting up that server, by setting it up.  But, anyway, then we got to Trump, who is using satire and parody with his comment, “Hey, hey, message to you Russians: If you find Hillary’s 33,000 emails, maybe you can let our media know.”  Obviously a satirical joke to make a point.