My Question for Progressives

RUSH: I’ll get to my question for you progressives, just jiffy.  I want to just go through a quick review of Mrs. Clinton’s speech as I saw it last night.  One of the first things that struck me — and it actually didn’t strike me last night; it struck me on previous nights — is this effort to humanize Hillary.

“And if you believe the rest of this (chuckles) I’m not surprised, ’cause I have smoked your ass the whole time I’ve been in public life. But here goes.”  So Clinton tells the fairy tale.  It’s all about humanizing Hillary Clinton.  Why do they want to do this?  Might they not think it better to present a tough-as-nails Hillary for the purposes of dealing with all the problems we have here?  Why “humanize” somebody that you’ve known for 30 years? If you have to humanize somebody… Think about that term anyway, just in and of itself.

I mean, Hillary is a human.  Of this, we are sure.  She’s been in public life, I say “30 years,” but it’s actually longer than that.  What is this “have to humanize” her?  And she even alluded to it last night by saying (paraphrased), “I am into public service.  I just don’t do the ‘public’ that well,” or something like that.  That’s not intended to be a quote; that’s how I heard it, though.  Instead, why wouldn’t they just send her out there as who she is?  Testicle lockbox over here, Nurse Ratched over there, take no nonsense.

“I’m gonna hammer whoever needs to be hammered to get it done — including Trump!”  Why this compulsion to “humanize,” to soften her?  It’s not really possible except among people who want that side of Hillary to be seen, but you can’t change somebody’s stripes.  Only they can.  You can’t. Nixon was able to do it, but it was not because people were talking about what a nice guy Nixon’s become or any of this.  It took a bunch of public appearances headlining Nixon in order to soften people’s image of him the left had created.

So I did… That’s the first thing that struck me.  Why spend this whole week trying to humanize here and soften her up?  And then she admits that even after these 30 years, people have the wrong impression of her.  She admits that few have ever seen all this good work that she’s done because she’s not all that good at the “public” in public service. (interruption) Oh, come on.  (laughing)  That I picked on her?  Oh.  Well, so everybody in public life has been caricatured.

“She never forgets who she’s working for.”

Heart melt! Cue the heart melts.  But that stuff works with that crowd.  Who’s she been working for?  This leads to my question, because Hillary even admitted last night that after 30 years, people might have the wrong impression of her because they really haven’t seen all this good stuff that she’s done — like the money they appropriated from the Haiti relief fund. She didn’t talk about all the wealth that the Clintons have accrued via the Clinton Family Foundation.

But she did try to tell us that she’s done a lot for children.  Yes, she ran into Marian Wright Edelman of the Children’s Defense Fund, and she has been devoted to children her whole life.  All right, fine.  But I want to know — and folks, I mean, this seriously.  If the question sounds flippant, I don’t mean it to be.  I really need to understand this.  It’s part of my never-ending quest to understand progressivism.  I’m gonna ask any and all of you with children, progressives.

And don’t start citing legislation to me, because the people out there, they’re not thinking, “Oh, Hillary sponsored the Child Protection Act of 1997, the children’s health insurance law!”  Really, is that what you really think helped your child?  But they’re not gonna cite that.  They don’t know that. The people I’m talking about, they don’t know that.  I’m talking the people who have your kids. You get up every day, you send them off to school or whatever. I don’t know what you’re doing with them. I don’t know where they go, whatever they do.

But I’m assuming you’re struggling because that’s how the Democrats portray you.

Hillary portrays everybody as struggling and suffering and barely getting by, and they are coming to your rescue. They are helping you.  What are they doing?  What do they do?  Is it the raising taxes on the rich?  I want to know: What is it?  Again, don’t mistake my passion for anger.  I’m genuinely curious to know.  Any of the bimbos, bimbo eruptions, women that Bill Clinton had affairs with? Any of them have children?  What did Hillary do for them? 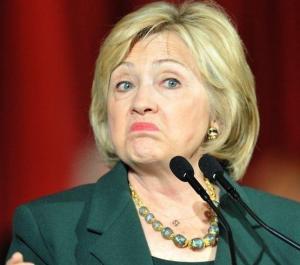 Whose children has she helped?

Whose children will she help, and what does she do?

What has she done?

What is she doing?

All of this stuff sounds wonderful, but I’m the mayor of Realville.  And I want to know what it is, what it is you think that’s so great that you vote for her because you want her to keep doing it, what is it?  And don’t tell me she cares, ’cause that’s not helping you a whit.  You care, too, about your own kids.  How much does that help?  Everybody cares.  Nobody has an exclusive on that.  So what is she doing?  I mean, she’s eagerly taking credit for all of this stuff, but I don’t know what it is.  I can’t even imagine it.

To me it doesn’t make any sense.  I don’t know what she can possibly be doing.  For this reason.  She’s been doing it for 30 years, and there’s still a lot of suffering out there.  The Democrats tell us every day, there’s still so much suffering, there’s still so much poverty, there is still so many obstacles.  What is she doing?  Why isn’t there a rosier future?  Why isn’t the picture better?  Thirty years Mrs. Clinton has been working for you.  We know she hasn’t been working for anybody but her. Her power, her wealth, making sure her husband’s career doesn’t implode, that’s what she’s been doing.

Oh, wait.  She killed Osama Bin Laden for your kids?  Oh.  Oh.  Osama put a contract out on your family or something?  How does that happen?  How does that work?  Osama Bin Laden’s dead and your kids are safer, and Hillary did it?  I’m serious, folks.  I hear these things.  I hear these Democrats say these things.  I see them be applauded.  I see them accept the applause. I see them promise to do more of it, and I don’t know what it is.  It’s kind of frustrating ’cause I know the answer.  The answer’s nothing.

Hillary isn’t doing anything for anybody’s kids.  The Children’s Defense Fund, what’s that?  It’s assumption that every child’s at risk because every family has a father, and a father is a dangerous potential predator.  And so I guess the Children’s Defense Fund protects children from the evils of family life.  Yes, that must be what it is.  But that can only be part of it.  There have to be other things.

Hillary Clinton has been in public life for 30 or 40 years bragging. Her daughter bragged about all of these great changes that she’s made, all of these great improvements, which no one sees and no one feels because Hillary and the Democrats continue to say that so many children are continually in need, so there’s never any solution to this.  There isn’t any improvement.  Children are at risk as much this year as they were last year, as ten years ago according to the Democrats.

It’s the same question I ask African-Americans who been voting Democrats 50 years on the basis of promises to end this and end that.  And the way I hear things, African-Americans are angrier than ever. After all of this attention, all this exclusive attention, assistance and help and guardianship provided by the Democrats.

So where is the resume?  We got all these platitudes about things that she cares about, but where is the resume that suggests that she’s actually fixed anything, which she has actually presided over breaking.  And when you get right down to it, when the Democrats hold a convention while they have occupied the White House for nearly eight years and start listing off the complaints, they’re talking about themselves.

So we got a bunch of broken things out there, they did it, broken things out there that they haven’t fixed no matter who did it.  They’re so good at caring about it all that we need to continue to grant them power.  It just doesn’t make sense.  Seventy-three percent of the American people, poll after poll after poll in this cycle say that the country’s headed in the wrong direction, that they are not happy.

Well, who’s been in charge?  Who has been in charge of implementing the policies that have failed and created this public sentiment?  I mean, whatever, however you answer that, you cannot answer it with Donald Trump. No matter what you want to say, you cannot blame anything going on right now whatsoever on Trump.  Not to say they won’t try, but you can’t do it.

RUSH: I got an email question, Open Line Friday question.  “Rush, I remember you saying don’t ever call liberals anything other than liberals.  That’s who they are and they invent all these other terms to deflect people and fool people, like progressive.  But you’ve always said call ’em liberals.  Okay, right.  But now you’re calling ’em progressives.  Why are you doing that?”

It’s a good question.  And the reason is I’m appealing to some of them.  They want to be called progressives, and I want them to hear what I’m saying when I’m trying to change their minds or persuade them, so I address them in a term that they want to be called.  It’s part of my outreach.  Nothing more.  I have not changed my mind that liberals are liberals.  It’s just if somebody wants to be called Mister-somebody instead of Fred, then I’ll call ’em that.  I’m actually trying to have a productive, persuadable dialogue.