Politico Upset by My Comments on the Melania Trump Photos

RUSH: Ladies and gentlemen, I’ve had this story here — oh.  Before I get to this story I’ve had here for a while, I see something else I didn’t throw away after I used it.  On Monday — was it Monday?  This is Wednesday, right?  I hate the sound a paper rattling like that, too, so I’m sorry — what date is this?  Yep, yep, it’s Monday.  New York Post ran nude photos of Melania Trump with other women.  Girl-on-girl, as it is characterized by those who traffic in such puerile interests.  Girl-on-girl nude photos of Melania Trump, and there were I think two or three different photos.  I don’t know if it’s the same woman or different women. 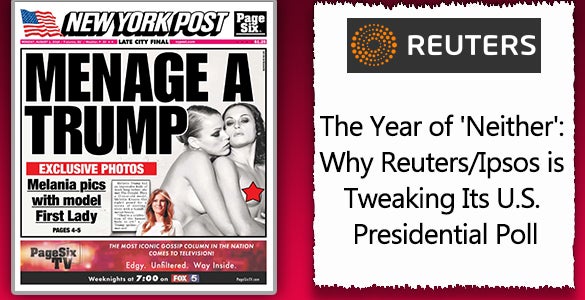 Anyway, I keenly and uniquely observed on this program after having seen these photos, I said, “Well, that probably wraps up the LGBTQ vote for Trump.”  Now, also on Monday I had a lot of poignant things to say to you. It was our 28th anniversary, and I had a tremendous amount of — if I say so myself, some cool things, some very important things and some brilliant points that I made.  The Politico, in writing about this show on Monday, only focused on my comments on the New York Post nude photos of Melania Trump girl-on-girl nude photos and my comment that it wraps up the LGBTQ vote for Trump.  They were not happy.

I don’t know what they thought it represented, but since I said it they were instinctively not happy with it.  And I thought I would mention that.  I just get a laugh out of this.  Of all the things I said on Monday, some were brilliant, some were unique, some would have been worthwhile quoting in a news related publication; but, no, Limbaugh’s take on the Melania Trump photos: Looks like that wraps up the LGBTQ vote for Trump.

It probably scared them that it might have that impact.  See, they’re only used to photos like that helping Bill Clinton.  They’re only used to pictures like this helping Democrats, not Republicans.  They look at photos like that, “Oh, well, that’s it, we’ve destroyed Trump, now we’ve taken Melania out.” They found these old model pictures.  And my comment might have reminded them, wait a minute, it could be just the opposite.

RUSH: This was the Washington Post over the weekend.  Now, before I tell you what this is, over the course of the many years that I have hosted this program, I have had extensive commentary on the ugly, to put it bluntly.  We have had commentary on business areas, malls and shopping areas that I have thought were being unkind by banning the ugly so as to not harm economic activity.  There have been people who have categorized certain Americans as Uglo-Americans, and we’ve commented on all of that over the course of the many years of this program.

And I said maybe I have the answer.  Maybe you don’t have to enforce it because the ugly know who they are.  Well, as you can imagine, people who do not hear this program in context, who only hear that sentence when they tune in, “Oh, my God, he really said that. Oh, gee, that’s outrageous, that’s so typical, I can’t.”  And they go off in their mock indignation, outrageous at things that I supposedly say.  And the acknowledgment that the ugly know who they are is just, they thought, beyond the pale.  They didn’t see the humor in it.

Lo and behold, Washington Post on, what was it, the 26th, so it’s actually late last week, a column, headline:  “Stop Telling Me I’m ‘Beautiful.’  I’m ugly.  It’s Fine —  My appearance doesn’t define me.”  It’s written by a woman named Kristin Salaky, social media editor and writer based in New York City.

She says: “If you’re alive and online, you’ve seen the Dove ‘Real Beauty’ ads, where people react to being called beautiful. They smile, break into tears and hug. These campaigns are meant to make me (and all women) feel good in their own skin. But while I love a good compliment, it doesn’t work on me. I’m ugly, and I know it.”

Case closed, folks.  What more do I need to say?

RUSH:  Tommy Tightpants there in the bumper music rotation — Tom Jones and “What’s Up Pussy Cat.”  Do you know he did not want to record that song? He hated it.  When they showed him the lyrics, he said, “Are you kidding me?  You want me to ruin my career?  There’s no way I’m singing that song.”  Somehow they made him do it and it became a huge, huge hit.  But he thought it was infantile and silly. “What’s up, pussy cat?  No woman wants to be called pussy cat! What? What?” He refused to do it for a while, but they talked him into it or forced him into it, I don’t know, but, it became huge.

ISIS: Muslims Would Have Kept Slavery in America

RUSH: Did you see Breitbart has a story here? It’s actually a column by Thomas D. Williams, Ph.D. “In a bizarre digression from their latest anti-Christian tirade, the Islamic State addressed the question of black slavery, claiming that if Muslims had been in charge of Western states [like America], the slave trade would have continued.  If Muslims rather than Christians had been running things in countries like the US, the Islamic State argues in the most recent issue of…”

It’s got a magazine, by the way. ISIS has a magazine called Dibiq.  D-I-B-I-Q. (interruption) No. I don’t know if it means beheading or not.  But they claim in their magazine that if they ran America, if they had always run America, the slave trade would be alive and well still. (interruption)  Of course they see it as a virtue!  I can’t wait for this to be reported so that Black Lives Matter sees this and other minority groups that follow and… I’m sorry.  It won’t be.  What am I thinking?

Obama Commutes 214 Sentences in One Day

RUSH: Fox News reporting Obama has commuted the sentences of 214 federal prisoners, the most in any one day in more than a hundred years.  Two-hundred and fourteen sentences, prisoners, sorry, we were wrong, you can get out of jail today.