What If the Public Doesn’t See This Election the Way the Experts Do?

“Priebus, Giuliani, Gingrich Plot Trump ‘Intervention’ — Top Republicans and political allies to Donald Trump are planning an ‘intervention’ with the candidate following a disastrous two days and political firestorm encircling … the nominee. Republican National Committee Chairman Reince Priebus, former New York City Mayor Rudy Giuliani and former Speaker [Newton] Gingrich are among those looking to talk with the businessman…” Now, didn’t we assume they were talking to him every day anyway?  I mean, I thought Newt was an advisor.  I thought Rudy was an advisor.

I certainly thought that the chairman of the RNC was.  Anyway, they want to do an “intervention” ’cause it just isn’t working.  I mean, he’s imploding! He won’t listen to anybody! (This is what they’re saying.) He won’t listen to anybody! He’s taking everything way too personally. He’s asking people to feel sorry for him. You don’t go anywhere in politics doing that.  “The group hopes to enlist Trump’s children, who have proven pivotal in advising the businessman’s candidacy, in their effort to get Trump back on track after days of feuding” on Trump’s part.

By the way, Chris Christie… This is why he was not named the VP. Chris Christie is letting it be known that he believes the way Trump is dealing with Khizr Khan is inappropriate.  So that’s why… This isn’t a cut on Christie, don’t misunderstand.  In the role of vice presidential nominee, you’ve gotta defend the nominee no matter what, and here Christie is illustrating that he would not have been able to follow through.  Bill Hemmer was talking to Karl Rove, and Rove is probably — like many people — thinking: “What in the world is going on?

“This guy owned it! Trump was on top of the world, and is now just imploding.  None of what Trump’s doing is making any sense.” People are coming up with theories.  Bill Hemmer asked Rove a question ’cause Karl was quoting from polling data and basically analyzing this from the standard, inside-the-Beltway, Washington establishment political handbook.  So Hemmer said (summarized), “Karl, what if we’re all wrong about this?

“What if the way you see everything that’s happening is not the way the people of this country see it?  There’s evidence… There’s abundant evidence…” This is Hemmer talking to Rove.  He wasn’t trying to entrap Rove.  It was a legitimate question.  He was saying, “Karl, what if the people in this country are so divorced now from standard, ordinary, everyday politics — they have such a distaste for it — that they have nothing in common with it anymore?

“Gold Star Father Slams Trump for Taking Medal.”  I’m telling you, this guy’s out there more than Tim Kaine is out there.  Yeah, a Purple Heart winner gave Trump the medal, and Khizr Khan is profoundly offended by this, and despite telling everyone he wanted to back out and leave the media, there he is out there.  By the way, Khan shut down his website.  That was our Morning Update today.  We had a little bit of that before the end of the program yesterday.

He shut down his website and he’s denying that he ever had anything to do with selling visas or green cards as a way of getting people immigrated into the country.  In fact, he said he tried but I failed. (paraphrased) “I didn’t succeed at that so I stepped out of it.”  But he’s now bashing Trump for accepting this Purple Heart that was offered by the Purple Heart winner as a gift.  So what is the premise? What do you think of the premise that Hemmer put forth, that everything’s so upside down that the manifestation of that is this.

It looks to standard, ordinary, everyday political operatives like Trump is imploding. It looks like, “Oh, my God, it’s a disaster! Oh, gee, this guy is just all over the map, doesn’t have a message anymore.”  But out there Trump is the vessel for the gazillions of people who are fed up with politics-as-usual and want no part of it.  And they don’t care.  None of this traditional analysis of Trump imploding. Trump blowing it. Trump going off message.  That was the premise behind Hemmer’s question, ’cause I don’t know how he feels about it.

Of course, he’s an objective journalist, but you wonder. You know that people in traditional politics are scratching their heads, and they have been.  And they are trying… There’s another story here in the Stack that another group of Republicans has launched a brand-new effort to find a way to get Trump off the presidential ballot, and there’s a story with a list of new Republicans publicly saying they’re voting for Hillary.  You go through the list; it’s not a bunch of big names.  Most of the names you wouldn’t know.

But they are big in the bowels of the GOP.  There’s one elected official, and he’s a congressman from New York.  I think his last name is Hanna.  The name added to the list today is Meg Whitman, who was on McCain’s short list to be vice president.  She’s always been a RINO or a moderate Republican. She never has been a conservative.  It’s not at all shocking that Meg Whitman would vote for Hillary.

RUSH:  I have a taker.  I have Donald in Ocean City, Maryland, who wants to tackle the Bill Hemmer question.  Have at it, Donald.  How are you?

CALLER:  I just want to say that it’s very frustrating as a Trump supporter to see what the media does, but I expected that, and I continue to expect it.  I think Mr. Trump connects with the average person in America, and I don’t at all see any problem with what he’s done here.  I just see this as one of the many situations that he’s faced going all the way back to the primary campaign in early February, and I think it will all blow over.

CALLER:  The Khan situation with the things that the Democrats are trying to pull here.  Mrs. Clinton doesn’t have any issues to run on.  The economy is terrible.  Our foreign policy is in a shambles.  And what they’re trying to do is run a campaign of distraction that just won’t work with the American on the street.

RUSH:  Well, if you’re right, the professional political analysts in Washington are missing it big time, because what they see is Mr. Trump imploding.  They see Trump actually losing the election this week.  They see him almost purposely self-destructing.

CALLER:  You know, we’ve heard that.

CALLER:  I listen to your show regularly all the time, and I think that you more than any other personality in the media has understood Mr. Trump going all the way back when he announced his candidacy.

RUSH:  I do, no question about it.  I understand this backwards, forwards, upwards, downwards, upside down, inside out.  I know Trump like the back of my hand.

CALLER:  There’s been a lot of situations where the media elites have thought that his campaign was gonna blow up.  And within a matter of days or a couple of weeks, it seems to be forgotten about —

RUSH: Look, I’m not trying to be a wet blanket here, but in every one of those instances Trump’s poll numbers remained high and he was skunking everybody in the Republican primaries.  In this instance Hillary has got a bounce out of her convention, she’s back on top by a significant number.  Trump is not.  And these people will tell you that he’s continuing to lose ground, not closing the gap.

CALLER:  Can I make one final observation with you? 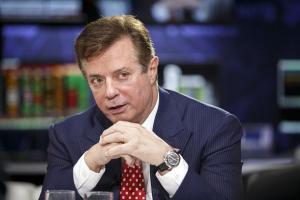 As I say, I’m not trying to be a wet blanket.

RUSH:  Paul Manafort, Trump’s campaign manager, was on Happening Now today on the Fox News Channel, and Jon Scott was interviewing him, said, “There’s another report out there that there’s supposed to be some kind of campaign intervention this weekend. People like Rudy Giuliani, Newt Gingrich, you, Reince Priebus, the Trump children, are gonna sit down with Trump, you’re gonna intervene, you’re gonna tell him where he’s going wrong, gonna try to get him refocused and start aiming fire at Hillary instead of fellow Republicans like Paul Ryan.  Is there any truth to this, Mr. Manafort?”

SCOTT:  But there was that email sent out to members of Congress saying let’s put this Khan controversy behind us, let’s try and focus our efforts on other areas, and yet the candidate himself continues to bring that up.

MANAFORT:  The candidate wanted to make clear two things on the Khan situation and we’ve put it behind us, frankly.

RUSH:  Can they put it behind them?  What if Khan keeps going on TV?  I mean, Khan said he was tired of it, he wanted to shrink back to private life, but he’s on TV every day at CNN.  How can they put it behind him if he’s out there leveling attacks?  Now Khan is out there demanding that Trump give back the Purple Heart that the veteran gave him.  I’m telling you, Khan looks more like a vice presidential nominee and a running mate than Tim Kaine does.

RUSH:  You know, this is a good point.  Wait a minute.  That’s not what I want.  Here it is.  You know who Rob O’Neill is?  Yes or no?  SEAL Team Six, pulled the trigger on bin Laden.  Fox News contributor.  He was on Lou Dobbs’ show last night, which is called Lou Dobbs Tonight.  That means it’s the eponymous Lou Dobbs show.

Anyway, Rob O’Neill appeared on the program, he’s former SEAL Team Six.  He pointed out the timing of Khizr Khan’s participation in presidential elections.  And he said, it’s obvious to him, to O’Neill, that Khizr Khan is not some random parent plucked by the Democrats from relative obscurity.  He instead is part of the Clinton machine.  And O’Neill’s reasoning is, “It’s unfortunate. They shouldn’t be politicizing it. And there was no mistake he came out for the Clintons. He’s worked for the Clintons before and there have been three presidential elections since his son was killed.”  They could have come out during any one of them.  But we never heard of this man until Hillary Clinton runs.  And it makes sense.

David Westin I think was the news director at ABC who hired Stephanopoulos.  I don’t know if Stephanopoulos was hired before Westin.  Westin’s no longer there.  The reason I mention this is because David Westin’s name has been tossed around as Roger Ailes’ replacement at Fox News.  How would you like that?  He’s just one of many names that have been mentioned.