RUSH: Leland Grove, Illinois.  This is Arnett.  It’s great to have you.  I’m glad you called.  Hi.

CALLER:  Hi, thank you for taking my call.  I have noticed something. In about the last week it seems like the Republicans have now begun this scorched earth policy against Trump. This is Republican-driven, and I believe it’s because of what I call Operation Saving Private Ryan.  I believe this is about Paul Ryan.  When this all started happening and I noticed nobody on the Republican side was even laying a hand on Hillary Clinton, I kind of tried to see what was going on, what Trump had done that may have precipitated this. 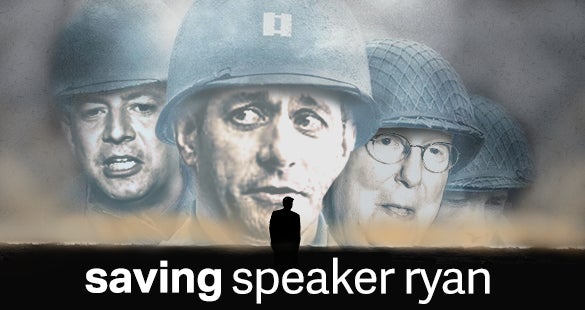 RUSH:  Let me ask you a question. You think — I am going to turn this around and go at it through the back door.  If Trump had endorsed Ryan, do you think most of what we have seen the past 10 days in the media about Republican panic about Trump, would not have happened?

RUSH:  Do you think that Trump made a mistake in not endorsing Ryan?

CALLER:  No, I don’t.  And I think he also didn’t endorse John McCain, and I think that added fuel to the fire.  I think they I guess armed up a couple more nukes towards Trump because of that.  Because when you see absolutely not one hit piece or one comment negative about Hillary Clinton who has betrayed the American people, who has compromised classified information —

RUSH:  You mean from the Republican side, not the media.

CALLER:  Yeah, I mean from the Republican side.

CALLER:  And we haven’t seen one thing going after Hillary Clinton.  I mean, there’s so much ammunition against that administration and not one Republican —

RUSH:  The Republican Party is not firing at Hillary at all.  We had a story yesterday that I found preposterous.  It was an AP story blaming Trump for the lack of unity in the Republican Party for not endorsing Ryan and McCain when in fact wasn’t it Ryan that withheld his endorsement of Trump first?

RUSH:  Well stated.  I have to stop because of time, but that’s brilliantly stated.  That’s very provocative.

RUSH:  This is as Angelo Codevilla wrote:  This is country class versus ruling class.  That’s exactly what it is.  And the ruling class is very aware of the stakes and what’s going on.