RUSH: So of all the things, I’m sitting here, it’s mere moments ago, I’m running a little bit behind in getting things organized, and Mr. Snerdley runs in and asks me if I watched the Olympics last night.  I said, “No, I didn’t watch the Olympics.  What are you doing watching the Olympics?”

“It’s turning into a reality show.”

“Yeah, it’s turning into a reality show.  They may save their ratings.”

He said, “Man, it’s great.  Our team is taunting the other teams.”  Apparently the Russians have this babe that was doping left and right, got caught on it, and our female swimmers are taunting the hell out of her.  It’s great.”

“And then there’s some Chinese guy that we’re taunting. He’s got shark teeth so we’re making all kinds of fun of this guy.  And we’re winning gold medals and so forth.”

And I said, “Wow.”  The only thing I knew about the Olympics — can I tell you the only thing I’ve heard about ’em?  Did you see where Hillary Clinton praised a fencer on the US Olympic team for being the first to wear a hijab?  Or hijab, I don’t know the correct way to pronounce it.  You didn’t see that?

Hillary Clinton praised a fencer on the US Olympic team for being the first to wear a hijab.  She tweeted a photo of her with this comment:  “In Rio, Olympic fencer Ibtihaj Muhammad became the first American Muslim athlete to compete while wearing a hijab.”

Unfortunately, just an hour or so after Hillary’s tweet Ms. Muhammad lost her first match and was eliminated.  So she’s the first American Muslim athlete to compete while wearing a hijab who lost at her competition.  Why celebrate a woman wearing something that’s been forced on her by a religion?  A religion run by men.  Is that impolitic to say?  It is accurate, but, you know, I may be skirting on the edge there with that comment.  I will admit this.

But what in the world?  Maybe “celebrate” is the wrong word, but why call attention, why honor, why talk about what a great thing it is, a woman is wearing something that’s forced on her by her religion?  She may actively agree to do it, don’t misunderstand, but it’s a religion run by men that subjugates and subordinates women.  You know, the contradictions in American liberalism and socialism are just overwhelming.

I mean, American socialism features American feminism, and yet look at how it bows down to other religions which really mistreat and disrespect women.  Does that not register with anybody else?  Or is it something you’re not supposed to say?

Note also this.  Hillary Clinton did not tweet congratulations to the first gold medal winner at the Olympics, the first American gold medal winner.  You know who that was?  You do?  You’ve been watching?  That’s right.  It happened to be an American woman who won the gold for marksmanship.  For those of you in Rio Linda, it means shooting.  It was a rifle.  She won a marksmanship gold medal, the first gold medal of the games.  An American won it.  Did Hillary send any kind of a recognition tweet?  Nope.  Didn’t even probably occur to her.

RUSH:  The American Muslim fencer, Ibtihaj Muhammad — the first Muslim-American to wear a hijab and so celebrated by Hillary Clinton — said she “‘doesn’t feel safe’ due to anti-Muslim sentiment” in the country. She says Trump makes her nervous.  She was born in New Jersey, and “said the US is at a point where it needs to change its dialogue following incidents like Donald Trump [commenting on] the Democrat National Conference,” and throughout his campaign.  And she’s very, very nervous here living in America wearing the hijab, the first Olympic athlete to do so. 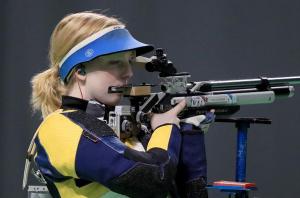