RUSH:  Okay.  Here’s why you didn’t know about Hillary Clinton back in 2008, ’cause it comes from an interview that she did with the Sioux Falls Argus Leader editorial board. She did an interview with the editors of that newspaper, and they had tape running, and this is what she said.  This is May 23rd of 2008.

HILLARY:  Between my opponent and some in the media, uhhh, there has been this urgency to end this.  You know, my husband did not wrap up the nomination in 1992 until he won the California primary somewhere in the middle of the June.  We all remember Bobby Kennedy was assassinated in June in California.  I don’t understand it.

RUSH:  What do you think that’s a reference to?  They’re urging her to get out of the race, and Obama’s got an insurmountable lead, and she says, “No, Bobby Kennedy was assassinated in June, and it’s not even June yet! It’s May here.  So somebody may be assassinated in June.  So I’m staying in!”  I mean, folks, what Trump said yesterday doesn’t even compare, and I doubt that hardly anybody’s aware that Hillary even said this back in 2008.  We played the audio; that’s why we got the clip.  And, by the way, here’s one more from Vice President Bite Me.  September 20th of 2008 — this is before the election — he’s out there in Castlewood, Virginia, at a campaign event and, as part of his remarks, Vice President Bite Me blurted out this…

BIDEN: They’re gonna start peddlin’ that to ya! I got two! If he tries to fool with my Beretta, he’s got a problem.

RUSH: I want to listen to these two bites again without the pressure of time.  Hillary Clinton, this bite that you heard and you’re going to hear again, Drudge posted it back in 2008.  It went viral on some conservative sites.  The Drive-By Media totally ignored it.  Hillary Clinton’s comment about (paraphrasing), “No, I can’t get out of the race yet.  Don’t forget Bobby Kennedy was assassinated in June, the year he ran.”

The New York Times, the Washington Post, none of them, none of them carried it, ran it, none of them were interested in this at all.  It remained an alternative media phenomenon.  And again it’s Hillary Clinton in May of 2008 in an editorial board meeting with the Sioux Falls Argus Leader. 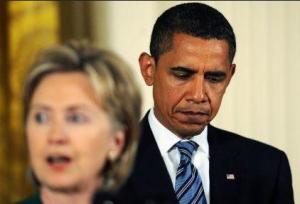 Now, here’s a Bite Me.  Now, this was September of 2008, a little under two months to go before the election. And when you listen to this, the context is that Biden is attempting to say that all of these gun nuts who think Obama wants to take their guns away from ’em are just crazy.  These gun nuts, these NRA types, these Second Amendment goombahs, they’re just a bunch of paranoiacs.  ‘Cause that’s not what Obama wants to do.

This is Biden’s unique way.  I mean, here’s a guy that never makes a gaffe, right?  (imitating Biden) “Hey, Chuck, stand up, Chuck. Let ’em see ya.” Chuck’s in a wheelchair when Biden asked him to stand up.  This is Mr. Walking gaffe, and whenever he commits one, “Ah, that’s just old Joe, ho-ho.”  When Joe commits plagiarism, “Hey, that’s just Joe. He’s just trying to help people.”  So here’s Biden, and he’s actually trying to get through to gun aficionados that Obama has no designs to take away their guns. 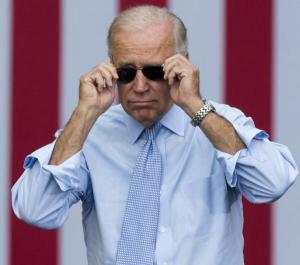 BIDEN: They’re gonna start peddlin’ that to ya! I got two! If he tries to fool with my Beretta, he’s got a problem.

RUSH: So he’s even alluding to the fact that if Barack Obama comes for his guns, his Beretta is coming out.  So who’s Biden talking about shooting here?  So you got Biden and you’ve got Hillary both talking about actually shooting somebody, or somebody being shot with guns, something that Trump did not do.

And yet you don’t know that those two things happened.  Many of you are probably hearing them for the first time.

RUSH:  We forced them into it.  CNN is now playing the video of Clinton before the Sioux Falls newspaper editorial board where she said (summarized), “No, no! I can’t drop out of the race now.  Don’t forget, Bobby Kennedy was assassinated in June.  It’s only May.  This race isn’t over.”  We have forced that one into the public domain.  I guarantee you that wasn’t out there.  That wasn’t why.  The Drive-By Media didn’t give that one any attention all back in 2008.

And there’s one more thing about this, folks.  And remember, when it comes… I don’t want anybody to be under a misunderstanding.  Donald Trump never even said the word “assassination.”  That was the word used by Hillary Clinton in 2008, which CNN is calling a gaffe. (impression) “But Trump meant it! Yeah, Trump, he meant it.”  With Hillary, “It was a gaffe!  We all know Hillary Clinton, and we all know Hillary Clinton didn’t really mean what she said.”  Yeah, right.  Double standards.

But my point in all this has been that everybody knows the Democrats from Barack Obama on down want to take guns away from people, and they want to do away with the Second Amendment.  That’s not even arguable.  They’ve said it over and over.  Now, they’ll deny it when a debate like this pops up.  “Oh, we have no intention of that! Oh, no, no. We love hunting,” they’ll say, or some such cockamamie excuse.  But I just want to remind you of this.

Then Hillary says if they won’t do it, she will, by executive action.  If that is not a target of the Second Amendment, I don’t know what it is.  So don’t anybody be fooled here as to who has really got some explaining to do, and it isn’t Donald Trump.