The Trump Outrage Is Phony

RUSH: Let me get to the phones here.  Gonna start with Wayne in Columbia, Missouri.  Wayne, great to have you on the program, sir.  Hello.

RUSH:  Great to have you, sir.

RUSH:  You know, he’s right, and there were two things.  There was a book, I don’t remember who.  I don’t think I’d ever heard of the author, but he was nevertheless reputed as esteemed.  He wrote a book on how to assassinate George Bush, and it was received with acclaim that, yes, the left acknowledged it was sort of out there, the theme, the subject matter, but the literary effort was well worth our time. That it was rich and well done and certainly worth our delving into to experience the literary effort that it was.

And then there was a movie made in Canada, actually made a movie depicting the assassination of George W. Bush.  And that movie was also acclaimed, and we were advised, look, it may offend you but you should watch this to understand how some people feel.  So the advocacy of violence against the president was heralded twice by the Drive-By Media.

RUSH:  So, as usual, I checked the email and a lot of doubters think I’m making it up about the movies.  Okay, here we go: “Death of a President (2006), British docudrama, political thriller film. From the UK Daily Mail September 20, 2006: “George Bush Assassination Film Wins Top Award,” and from the article, “British director Gabriel Range’s “Death of a President” stirred up a strong reaction even before it premiered at the festival, but it won the Prize of the International Critics. The jury of film critics cited the film ‘for the audacity with which it distorts reality to reveal a larger truth.'”

So it was awarded for telling a series of lies in order to justify the “larger truth” that Bush needed to be assassinated, and the movie ended up winning a total of six awards.  And there was a book published by Krandall Kraus 2007, “The Assassination of George W. Bush: A Love Story.” It was in paperback.  So there was a book and there were movies, a movie about assassinating Bush, done by leftist “artists.”  I point all this out… Once again, folks, this is not a defense. I’m not mounting a spirited defense of Trump, although I’m happy to.

But that’s not what I’m doing.  The hypocrisy and… If you want to ladle out some guilt, the guilt is all on the left on this.  They know they’re making a mountain out of a molehill.  They know exactly what they’re doing.  It’s a technique.  In fact… In fact… In fact… I’m looking for the sound bite.  Stand by…  Stand by…  Grab sound bite number 11.  It is exactly a tactic, and in fact it’s in the Democrat Party playbook.

This is last night on The Kelly File.  All the Fox people are on vacation, so Trish Regan was filling in for Megyn Kelly, and she had on one of Trump’s spokespeople, Katrina Pierson, about this uproar over Trump’s Second Amendment people comment.  Trish Regan said, “Hey, Katrina, starting with you: Is the left overreacting to this, in your view?” 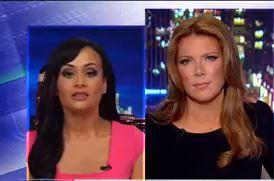 RUSH:  Let me repeat this.  It was revealed in the WikiLeaks document dump of DNC emails that they have a PowerPoint presentation that they give out to all of their people that appear on TV, and all of their consultants who devise strategy and then send out the memo to everybody else: “Here’s what to say. Here’s how to say it.” The PowerPoint presentation on messaging slide number 6, the theme is violence, and whenever there is any opportunity to show that the Republicans or their candidate uses violence or advocates it, this is how you say it. This is what to do.

And this is why everybody talking about this on the left sounds identical because this is in the playbook.  This is a technique.  This is something that is studiously planned for by them.  They expect exactly that, and the media is in on it.  The whole thing is trumped up.  And it’s… Folks, it’s for this reason that I get so frustrated with everybody falling for it.  It’s not genuine.  This outrage is faux.  It’s rigged up.  It’s phony.  They’re pretending to be outraged over this.  They’re not really.

Let me go to David “Rodham” Gergen.  Grab his audio sound bite ’cause he’s sound bite number four.  This will illustrate what I’m talking about here.  This is last night with Anderson Cooper 210, John Berman filling in ’cause Anderson Cooper’s on vacation.  By the way, note, my friends, who is not on vacation.  That would be me.  So, anyway, Berman is speaking with Gergen with Trump’s remarks that supporters of the Second Amendment might be able to fight any nominee that Hillary would throw up there to the Supreme Court.

So Berman says, “Look, on the question of whether Trump was inciting violence…” Remember, now, PowerPoint presentation, slide 6: Violence — How to suggest the Republicans use it, are in favor of it, inspire it, what have you.  So he makes sure to get that word in there.  “On the question, David, of whether Trump was inciting violence, that’s an extreme view of what Trump said.  A middle view, which is also critical, is that he was careless in his words in talking about violence in a way dealing with presidential candidates.  Some people, David, think that you should never even get close to that line.” 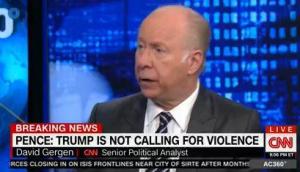 GERGEN: This is shameful.

But, you know (impression), “This is the clearest dog whistle we’ve ever heard.  You don’t do this.  These are preludes of dehumanizing somebody, demonizing them, making…” They didn’t demonize George W. Bush?  They wrote books about assassinating him, Mr. Gergen! They did a movie about assassinating him.  I don’t remember hearing a peep from CNN about that, and then making it possible for some crazy out there — and we’re talking about crazy.

You see how this all works.  I’m just, again, reiterating, folks: This whole thing is ginned up.  They really… They’re excited about this.  They’re not angry.  They’re acting mad.  They’re acting outraged.  They’re acting like this is so beneath them. “It’s so beyond the pale! This is beyond the civilized discourse. This is something we should never, ever tolerate in our campaigns!”  Meanwhile, it was Hillary Clinton in 2008 who actually referenced the possibility that Obama might be assassinated, as the reason she would not drop out of the race.

And they didn’t say a word about that back.