CNN Falls to Third Place for a Reason

RUSH:  I meant to mention this earlier.  CNN has started doing something that’s new.  They do instant fact-check on Donald Trump.  They may do it on Hillary; I haven’t seen it.  Here’s what they do.  I just saw it.  They just ran a graphic — a chyron graphic, one of those banners at the bottom of the screen — and here’s what it says verbatim:  “Trump Calls Obama Founder of ISIS (He’s Not).”  And in a very tiny font underneath that, they make some reference to CNN’s fact checker.  But you don’t see that.

You don’t see that what this is… (interruption) There it is.  “Trump Calls Obama Founder of ISIS (He’s Not),” fact checked, al-Baghdadi… It’s editorializing. They can do what they want, but I’ve never seen it.  I’ve never seen them do this to a claim that Hillary Clinton has made or any other Democrat.  I’ve seen it repeatedly with claims that Trump makes.  Normally what they do is just report what a candidate is saying and they leave it up to their brilliant audience to wade through the muck and find out the truth of it.

CNN has become the all-Trump-bashing network all the time.  It’s just what they do, and I think people don’t want to hear it.  I’m not saying that they’re all Trump fans, either.  It’s just they don’t… I mean, it never ends. Whatever Trump says, whatever he’s in the news for, it’s a bash, it’s a rip, it’s a criticism. Then they’ll convene their roundtables to double down on it and they’ll have one Trump spokesman with four or five other people.  And it’s just…

These things matter, and I just don’t think their audience… They may be all-in for Hillary. Their audience may be a primarily Democrat audience. But why are they losing?  I mean, they’re throwing audience away.  They are bleeding.  It’s incredible.  And they were number one during the Democrat convention.  Are you aware of that?  They had twice the audience of Fox during the Democrat convention.  They had, I think, an average of six million viewers a night versus Fox’s three.

Those are rounded numbers.  Now, it could well be that Fox’s audience has no idea to punish itself and watch the Democrat convention.  And a lot of libs know that CNN is the liberal Democrat network, so they tuned in. But they stay with it, and they have fallen by the wayside even more.  By the way, here’s another CNN indictment: CNN was the network reporting that Secret Service had called Trump and demanded a sit-down to discuss with him his “threat” against Mrs. Clinton.  You know what, folks?

It didn’t happen. The Secret Service never met with Trump.  Not about this.  The Secret Service didn’t have any cautionary warnings for Trump.  “A federal official on Wednesday said the US Secret Service had not formally spoken with Republican Donald Trump’s presidential campaign regarding his suggestion a day earlier that gun rights activists could stop Democratic rival Hillary Clinton from curtailing their access to firearms.  …

“[A] federal official familiar with the matter told Reuters that there had been no formal conversations between the Secret Service and the Trump campaign.  Earlier CNN had reported that there had been multiple conversations between the campaign and the agency. …  ‘No such meeting or conversation ever happened,’ Trump wrote on Twitter, accusing CNN of having made up the report.” They not only probably made it up, they pounded it! I mean, they were pounding it from 2:30 yesterday on practically nonstop. 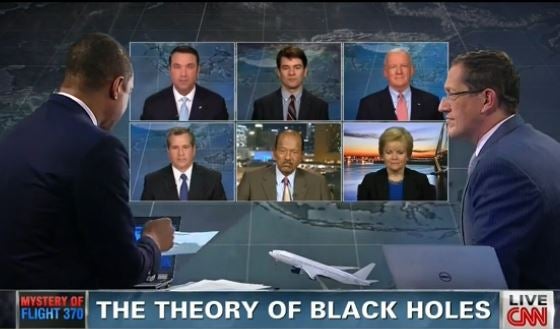 In fact, we had a sound bite yesterday. I didn’t get to it. Remember how Wolf Blitzer couldn’t keep his pants up reporting that George Bush’s ratings had fallen down to the thirties?  He did the same thing on this.  “It’s five o’clock in New York!  It’s midnight in Paris! And Donald Trump has had two secret meetings with the Secret Service about his caustic comments about Hillary Clinton!” “It’s 5:15 in New York!  It’s 15 minutes after midnight in Paris!  Donald Trump is…”

He went on and on and on, another one of those montages.  It never happened.  Since we’re at CNN, grab audio sound bites… What are they here?  Grab 17 and 18.  This is our old buddy Don “Black Hole” Lemon.  Before anybody gets the idea, here… (interruption) Snerdley’s going, “Wait a minute. You want to rephrase that?”  Yes.  During the disappearance of the Malaysian airliner, the estimable — who we love.  We don’t want anything to ever happen to Don Lemon at CNN.

We want Don Lemon to get promoted.  We want Don Lemon on the air all the time here, folks.  Don Lemon asked a former National Transportation Safety Board expert whether or not a black hole could have swallowed up the Malaysian airliner.  And, sure as it can be, several journalists circled the wagons to try to explain what Don meant by that, that it would be a mistake to take him literally.

Don Lemon knows that black holes are way, way out there in the universe and couldn’t possibly have swallowed the airliner, ’cause if a black hole had swallowed the airliner, it would have swallowed us.  And the National Transportation Safety Board babe, Mary Schiavo, did her best to not make a fool of Don Lemon.  She actually treated his question with a modicum of respect.  She laughed it off and then answered it in her own way.  Well, anyway, we love Don Lemon, and we want him around. So don’t anybody get… His nickname here is simply based on that.

BONGINO:  It’s clear he’s trying to motivate people to go out and vote based on the potential for an open Supreme Court seat.  How that’s clear to you that was some kind of call to an open revolution and to start firing your weapons at public officials, is utter absurdity!

LEMON:  No one said that!

LEMON: I have two ears and I have two eyes, and I can see the reactions of people behind me, and I — I — I’m not… We’re not stupid.

LEMON: We’re supposed to be stupid enough not to understand that?

BONGINO: Yeah. I’m sure you can.

LEMON: We should believe the spin coming from the surrogates and from people like you?

BONGINO: Don, it doesn’t make it —

LEMON: You should ashamed of yourself!

BONGINO: Don, frankly, I’m ashamed that you’re talking to me as if I’m a child when 12 years of my life —

BONGINO: — I spent as a Secret Service agent putting my life on the line, while you were learning to be a TV personality, sitting here lecturing me.

LEMON: — because you’re telling me what I’m supposed to hear, and you’re stick — sitting here on television lying to the American people.

BONGINO:  You don’t know crap about this, Don! You’re a TV guy! I was a Secret Service agent!  Now, cut off my mic. Do what you want to do!

RUSH: (impression) “Yeah, turn off my mic! Go ahead, Don! You don’t know crap about this. I’m a Secret Service agent; you’re a TV guy,” and Lemon was not happy with that.

LEMON:  I’m not gonna cut off your mic.  I’m gonna tell you that you’re sitting here and you’re lying to the American people.

BONGINO:  Look, with all due respect to David Gergen, you don’t know what you’re talking about.

LEMON:  — and you know that you’re lying to the American people.

RUSH:  Well, I don’t know if you were able to make that out, but let me read it to you.  After Lemon said, “I’m not gonna cut your mic off, but I’m just gonna tell you that you sit here and you’re lying to the American people.”  Bongino said (paraphrasing), “Listen, with all due respect to David Gergen, you don’t know what you’re talking about.”

Lemon said, “You’re lying to the American people, and you know it!”

Don’t forget how this started.  Lemon denying that anybody had said that Trump meant anything dangerous by this.  So Lemon denies saying it, and then spends the rest of the conversation trying to prove that’s what Trump meant, after saying nobody’s saying that.  I mean, it’s no wonder that Bongino ended up a little frustrated.