Low-Key Trump Takes on Obama and Hillary in Miami

RUSH:  Trump was in Miami today.  He made a speech to the National Association of Home Builders.  It’s their annual midyear meeting.  I have not seen this Donald Trump in a long time.  This Donald Trump looked like he was on Valium compared to the Donald Trump we see each and every day.  It’s not a criticism.  It was markedly different.  It was low-key.  It’s still as powerful.  He didn’t shirk from what he was saying.  It was simply the way he was saying things. Very, very low-key.  No histrionics. Didn’t go off on tangents as they occurred to him. He stayed focused.  A couple of sound bites.  He added a chart to the wrinkle.  He holds up a chart here of home ownership under Obama and explains it.

TRUMP:  I’m into the world of charts lately.

TRUMP: You don’t need very good eyesight to see what’s going on.  So here’s Obama and here’s the end.

RUSH:  So you hear how relatively/comparatively low-key Trump is there, and he’s showing his chart.  The thing about home ownership is right on the money.  It is in a 51-year low.  And that after all of these subprime mortgage scandals designed to put everybody in a home.  Home ownership’s lower than ever, after the Democrats, Jimmy Carter and Bill Clinton come up with this subprime mortgage scheme demanding that banks make mortgage loans to people that have no way of ever repaying it.

It was nothing more than a sop to the poor.  “See, it’s not fair that the rich and other people own a house and you don’t. So we’re gonna put you in homes! We’re gonna let you live in a home! The big banks are gonna take it on the chin. The big banks have been screwing you; well, you’re gonna screw the big banks.” They don’t say this, of course, but this is the impression created. “We’re gonna fix it so you can buy a house. The banks cannot say no to you.”  “Yaaaay! Yay!”

And even with that, home ownership is at a 51-year low, and it’s largely because nobody is working and nobody is earning enough money to continue to make mortgage payments and people are being foreclosed on.  And somehow, Obama escapes any attachment to it!  Trump is trying to tie Obama to it — and Hillary, because she wants to continue all this under the guise of continuing to make it better.  And just one more bite from Trump’s speech at the National Association of Home Builders’ midyear meeting today in Miami.

TRUMP:  She’s voted for higher taxes 235 times in the Senate.  She’s proposing a big one today in her speech, her teleprompter speech.  She’s got —

TRUMP: Her speeches are so short, though.  They don’t last long.  You know, they’re like 10 minutes. “Let’s get outta here. Go back home and go to sleep. “ 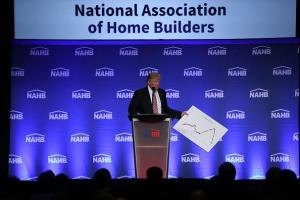 TRUMP: Oh, boy, is ISIS hoping for her!  Is China hoping!

RUSH:  Yeah.  That’s about right.  Her speeches aren’t very long.  Do you know that she gave…? She donated her speech at the Democrat National Convention?  She waived her $250,000 speech fee.  She was actually thinking of charging them for her acceptance speech and ended up waiving it.  Anyway, you hear the different Trump there. Maybe because of the audience? He likes…? Who knows?