RUSH: You know, I meant to mention this yesterday.  The Dallas Cowboys created a helmet decal that they wanted to wear on the back of the helmet in this upcoming season honoring the slain police officers in the Dallas massacre.  The NFL said, “No. It violates our rules.” The NFL said no.  Now, the NFL devotes the entire month of October to making their players look silly wearing pink gloves and pink socks and pink this and pink that — and pretty soon the ball’s gonna be pink, I’m guessing (that wouldn’t surprise me, either) — in honor of breast cancer awareness.

Fine. The league can do what they want.  But to say this a violation of the rules? Why do you think they really said “no” to this? (interruption) Well, I’ll tell… (interruption) No.  It’s not that.  I don’t think… They may be afraid of other people having a cause, like every local community, like every team. Like, say, the Indianapolis Colts would have some cause going on there like religious freedom, and they wanted to put a Bible with a bullet through it or something. I don’t know. They’d have to turn something like that down. You never know.

I just can’t.  Not from my perch looking down on everybody. (interruption) No.  It was not. (interruption) I didn’t think it was… No.  I thought so many great premises they set up, and it never went anywhere, in my mind, but that’s as much as I’ll say. Anyway, last year before a game, the St. Louis Rams — a bunch of defense backs, defense players — during player introductions came out “hands up, don’t shoot,” remember that?  “Hands up, don’t shoot” is a lie. 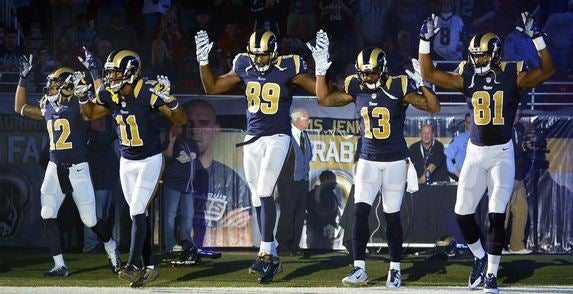 There was no “hands up, don’t shoot” in Ferguson.  There’s the hometown team, the St. Louis Rams. Those guys were not disciplined. Those players were not, ’cause it was freedom of speech.  I’ll tell you why the Cowboys are not being allowed to wear that decal.  This is so easy, I shouldn’t have to be the one to say this! You can’t figure this out?  Are you kidding me?  The Dallas Cowboys want to put a decal…?  By the way, it’s not provocative.

It’s a circle, and it’s got some designation of honor, five cops.  It honors five cops who died.  It doesn’t honor anybody else.  It honors the five cops who died.  Well, you don’t think some left-wing activist groups could have a big problem with that and think, “You know what? We’re gonna have to stir up some trouble here! They’re honoring the cops?  What about us?” That’s what the NFL’s afraid of.  They’re afraid of Black Lives Matter saying, “What do you mean, honoring the cops?  The cops are the problem!”

Remember, that’s the dogma of the left wing today: The cops are the problem.  Look at the  DOJ.  They just had to take over the Baltimore Police Department ’cause the police department there is what? Racist and incompetent. Even though the cops were totally exonerated in the Freddie Gray case, here comes Loretta Lynch and Barack Obama riding in on whatever they ride in on, taking over the Baltimore police, like they took over Ferguson and 25 or 26 other city police departments, on the basis that they’re what?

The basis that they’re corrupt, that they’re racist, that they’re unfair.  Here come the Dallas Cowboys wanting to honor cops. “Ah, ah, ah! No.”  I think the NFL looks at that as like lighting a match.  That’s what I think.  So they’re not gonna provoke anybody.  They are looking at this, saying, “Okay, we understand the team wanted to honor five cops.  But who is that going to provoke?” And it will provoke some people.  You know it as sure as you’re sitting here.

Pink footballs and pink socks and pink gloves and stuff, that doesn’t provoke anybody; it just raises eyebrows.  But that could. The NFL doesn’t want to go there.  Guaranteed. Do you understand now? (interruption) Yes, of course, we’ve come to this point!  How can you possibly claim that you don’t understand what I’m talking about? (interruption) I’m not gonna go any further than that.  (interruption)  Okay, okay, you got it.  You got it. (interruption) Well, not just players.

Look, use your imaginations, folks.

You can come up with the exact things I’m thinking about here.