RUSH: All right.  Ann Althouse pointed this out — at least this is where I found this, where I saw it, Ann Althouse on her website, on her blog.  At 10:06 a.m. — and I guess this was yesterday — unrest in Milwaukee.  New York Times headline: “Unrest in Milwaukee After Police Fatally Shoot Unarmed Man.” 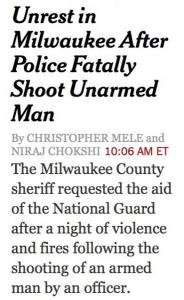 When’s the last Republican mayor in Milwaukee, 1908?  I mean, Republicans haven’t had a say-so in this town, in its culture, in it’s dominant governance in decades.  So, anyway, this is how the New York Times story leads off: “The Milwaukee County sheriff requested the aid of the National Guard after a night of violence and fires, including the shooting of an armed man by an officer.”  They had it right in the body of the story.  But everybody knows the headline is the money part of any story because that’s the first thing people see. 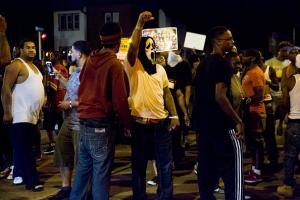 Here’s what’s going on, I don’t know if you’ve heard it or not, but Black Lives Matter plans to shut down Graceland this week.  Elvis Presley’s home.  This is Graceland week, apparently.  In Memphis people show up, and the Coalition of Concerned Citizens — I think Black Lives Matter is almost approaching unionized gang status now.  They have imprimatur from the White House.  They have their leaders up there honored for the great work that they do, and they’re rabble-rousers. And they’re gonna go into an event that’s always peaceful and try to cause trouble.  “The Coalition of Concerned Citizens, including Black Lives Matter protestors and other –” I was gonna say gangs, excuse me “– groups announce their plan to shut down Graceland.

“Protest leaders say the mass demonstration is planned for 6:00pm Monday. They said they specifically chose Graceland because it is Elvis week and they know it will raise awareness. Leaders say they also chose Graceland because ‘it demonstrates one of Memphis’s most common forms of financial inequality and because the site has ties to � the death of unarmed teen Darrius Stewart.’ ‘We feel like we still haven’t been answered,’ said Frank Gottie, a community leader. ‘They’re givin’ us the runaround.'”

Graceland has a lot to answer for.  Graceland?

Recently in front of Graceland some Black Lives Matter protestors were detained from blocking traffic.  At the time activists said they wanted their demands met by the city, which they admitted would take time.  Graceland’s got nothing to do with anything here.  But they’re showing up.  And they’re gonna have all kinds of attention focused on ’em, sympathetic naturally.

Electing Barack Obama was supposed to stop all of this.  Electing Barack Obama was supposed to set us on the path to fixing all this, to solving all this, to promoting unity.  And those who felt like they’d been taken for granted, taken advantage of, screwed and all that, they were gonna get theirs.  Obama was gonna turn the tables and Obama was gonna screw the screwers.  He was gonna make sure that the disadvantaged got theirs.  And of course the disadvantaged and the minorities, they’re angrier than ever.  They’re more upset than ever.  They’re more violent than ever.  Well, not than ever.  The sixties had its share of violence.  But, I mean, in our modern era and these two or three generations alive today, to some it’s precedent setting.

RUSH: I just got a note about a video.  “Milwaukee Rioters To Police: ‘We Want Blood…We Cannot Cohabitate with White People Anymore.'”  Now, I can’t watch this stuff during the program.  This is one of the problems.  I get this stuff submitted to me, and I can’t watch it. I have to send it up… It’s 17-minutes long.  So I just want to make you aware of this, because it dovetails with a story I have been saving since last week.

Now, hang on.  I’ll give you a pull quote here. At the 35-second mark of this 17-minute video, it’s a… This video, by the way, has emerged, and this video appears to show the beginning of the Milwaukee riots.  This is as the rioters were initially threatening the cops who were trying to keep the peace during the afternoon, after everybody thought that once again, white cops had shot an unarmed black. It wasn’t the case. It was an armed black fleeing the scene of a crime shot by an African-American cop.

But the community was lied to about it by media and by “community organizers,” and so this video purports to be at the beginning of the Milwaukee riots.  At the 35-second mark of the 17-minute video, a rioter can be heard yelling to the officers, “We do not want justice or peace anymore.  We are done with that [excrement].  We want blood!  We want blood!  We want the same [excrement] y’all want: Eye for an eye.  No more peace.  F[bomb] all that.  Ain’t no more peace! Ain’t no more peace! We done. We cannot cohabitate with white people. One of us have to go, black or white. All y’have to go.”

Now, before you say, “Well, that’s the heat of the moment and we can’t react too crazily to this,” I’m not reacting to it at all.  I’m just telling you about it.  I don’t doubt that these people mean it.  Now, I don’t know how many people they represent.  But let me ask you a question: Are you aware…? No.  Let me rephrase the question.  How aware are you of the predominance of “white privilege” being taught in a condemnatory way on American college campuses today?  It is huge, folks.

They have unfairly benefited from a patriarchal, white privilege culture.  This stuff is not insignificant.  You know, these are the kinds of things that we would see — that I would see — during this program 20 years ago, 25 years ago, and we’d make a joke about it. We’d produce a funny parody about it. We’d laugh about it ’cause we thought it was fringe. We thought it was fringe, and it was uproarious. It was hilarious. “Nobody’s gonna believe this.  It is amazing what kind of kooks they’re breeding on college campuses.”

But here we are 25 years later and this stuff’s becoming mainstream.  Maybe not even “becoming” mainstream. It has become mainstream on a lot of college campuses.  Well, the story that I’ve been holding dates back to August 10th, folks. Claremont! You know Claremont?  Think of not quite, but think of Hillsdale College when you think of Claremont.  I was once given an award by the Claremont Institute. It’s a think tank. But Claremont is a school, an independent school.

A student “posted on Facebook that non-white students in need of housing arrangements should reach out to either her or two other students with whom she plans to live in an off-campus house. The post states that ‘POC [people of color] only’ will be considered for this living opportunity. ‘I don’t want to live with any white folks…'” This woman is named Kare Urena, so she’s Hispanic, Latin of some kind.” But in some cases, it’s even white students who don’t want to live with other white students because it stunts their growth, and it encourages their racism.

They want to live with people of color to learn how their white privilege has harmed America, and they can only do this by living with people who have the grievance as victims of white privilege — and again, this is not just isolated.  This is more widespread than you think.  So the point of all this is why David Clarke is exactly right. But we’re so far beyond the debate over Big Government versus Little Government, and government intrusion versus government leaving you alone, and self-reliance versus government subsistence and so forth.

We’re so far beyond that.  That debate is almost incidental now.  And what’s replaced it is the debate over just how unjust is the United States. How immoral is the United States, as it was founded? How guilty is the United States?  The answers are: Very guilty, very unjust, very immoral, and why — and now one of the reasons why is white privilege.  And, of course, all of this discrimination is applauded, because it’s seen as fixing something.  Yes, fixing decades, centuries of racism and discrimination!

So this reverse racism, reverse discrimination is called for, promoted, tolerated, not called out and all.  And I submit to you that it’s these kinds of things that we’ve seen sporadically in the news in recent years and we look at it (laughing), and think, “This is so extreme, so locoweed. These college kids… (laughing) You know, it takes all kinds. Who knows what they’re gonna come up with next?” It’s becoming mainstream, all this stuff that we used to compartmentalize over here as kooky.

RUSH:  All right, here’s what it sounded like.  This is Saturday, Milwaukee. After police shot an African-American suspect who was armed, a group of people gathered to confront the police, and a protestor can be heard saying that he’s done talking. He’s finished talking.  This what he said… 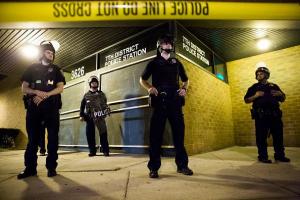 So where’s our common ground here?  Where do we meet halfway?  How many of these guys think Gentle Giant really had his hands up trying to surrender, saying “Don’t shoot,” and was running away, and shot in the back? How many do you think really believe that?  I’ll betcha a lot of them do.  How many of them would change their minds if they could be convinced that “hands up, don’t shoot” didn’t happen?  Answer:  Zero.  They want to be ticked off.  This is community organizing, folks.  This is what it looks like.  This is how it works.  This is the end result of it.