RUSH: As to Aetna, Aetna is one of the largest health insurers in the country.  They were all-in with Obamacare.  There was Kaiser Permanente. There was Blue Cross/Blue Shield.  You know why they were all-in?  By the way, this, folks, is a classic example of cronyism.  This should have been the example I’ve been using all week and last week, too, to explain this.

On the one hand, you have a bunch of big, private sector businesses who, in the normal proceedings of every day, would want nothing to do with the government.  The government regulates ’em, overregulates ’em. They would rather be able to compete everywhere and sell their policies or whatever they would do rather than have to labor under all of these regulations and restrictions.  If left to their own devices people that run these big corporations like this would want nothing to do with liberalism or Big Government quacks or what have you.

But here comes Obama and Obama wants national health care for everybody.  He knows most people don’t, so how does he do it?  He’s gotta have allies.  So he puts in his plan a mandate, which is unconstitutional, a mandate, a requirement that every American buy health insurance.  Well, if you work at Aetna, if you run Aetna, if you run Blue Cross/Blue Shield, why wouldn’t you get in bed with that?  I mean, to hell with whether I’m conservative or liberal, to hell with America, to hell with patriotism; if the president’s gonna demand that everybody in the country is my customer, sign me up.

Imagine running any business and have the president pass a law that says every citizen has to buy what you sell.  You’d kind of love that president, too.  And you’d sign up.  And that’s what they did.  Well, the company now, Aetna, announced that they’re going to significantly scale back their presence in the Obamacare market.  They are at present participating in 15 states.  They’re gonna get out of 11.  You know why?  Aetna lost $200 million in the second quarter in the state exchanges.

They lost $200 million.  They lost $200 million in a business where every American was required to buy their product.  And they still managed to lose $200 million.  And the Aetna CEO, as he gets out of 11 of the 15, still praises these exchanges, talks about how wonderful they are.  He can’t separate from Obama.  He’s got to maintain the cronyism, but he’s getting out of the business to save the company.  Obamacare, it’s a disaster for everybody that comes in contact with it.

RUSH:  You people that live in Tennessee, the Obamacare exchange, reports are that your premiums will increase 40% or more starting in October ’cause of Obamacare.  Yeah.  Hubba hubba.

RUSH: They lost $200 million in the second quarter, in three months, on the Obamacare exchanges.  They were in 15 state exchanges, and are pulling out of 11 of them now. The CEO of Aetna is a guy by the name of Mark Bertolini, and Mark Bertolini said, “As a strong supporter of public exchanges as a means to meet the needs of the uninsured, we regret having to make this decision.” 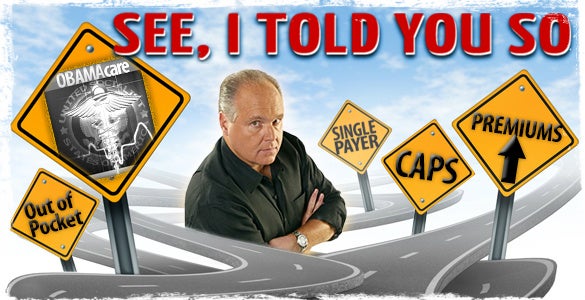 You’re getting out of 11 of 15 of ’em!  If the exchanges are the best way to meet the needs of the uninsured, then why are you leaving?  This is cronyism.  Yeah, the guy’s pulling out, but he can’t humiliate Obama doing so ’cause he’s got this crony relationship with Obama that must be maintained. So while he gets out of the exchanges, and while he gets out of Obamacare, he has to tell everybody how wonderful Obamacare is.  He has to tell everybody what a great way Obama structured insuring the uninsured.