RUSH: The first bite here is the Trumpster suggesting that Hillary does not have the stamina to fight ISIS.

TRUMP:  The rise of ISIS is the direct result of policy decisions made by President Obama and Secretary of State Clinton.  Incident after incident proves again and again Hillary Clinton lacks the judgment, as said by Bernie Sanders, stability, and temperament and the moral character to lead our nation.  (applause).

TRUMP:  Importantly, she also lacks the mental and physical stamina to take on ISIS and all of the many adversaries we face.

RUSH:  Stamina.  Stamina.  Stamina.  What does that mean?  Well, I mean you and I know what the word “stamina” means.  What’s Trump actually referencing there?  I would suggest he’s discussing her health.  And by the way, folks, I know this is not — but I can’t help it — I know this is not cool to do.  But did you see Mrs. Clinton yesterday at that rally with Biden?  Oh.  She doesn’t look well.  And I’m trying to be generous, understanding.  She does not look well.

Then I read there’s a post out there by the Gateway Pundit last night that she essentially takes weekends off, that she runs out of gas, that she needs Friday, Saturday and Sunday to recuperate or whatever.  I guess that’s the take.  Don’t guess anybody really knows why she’s taking weekends off.  It’s just assumed that it might be health related because of all the other things in the news about her health.

We haven’t touched on many of those here at the EIB Network, as many of the references are a couple months or longer ago old, but this video and the still shots, I’m sad to say, you know, I’m the one that raised the question way back when, I guess it was in 2008.  You know, back in 2008, and it was not me.  There were all kinds of people asking questions about her age and asking, do we really want to watch a woman of this age, age before our eyes in the Oval Office?  Is that what we want to see?  I came to her defense when that — do you remember?  I came to her defense when people started on that, but I’m telling you, this is —

And then there’s another picture here.  Vice President “Bite Me” met Democrat presidential nominee Hillary Clinton today at the airport in Scranton and eagerly embraced her and wouldn’t let go.  And I’ve got a picture of that, for 17 seconds Biden kept his arm around Hillary’s waist.  It’s not her waist, it’s her armpits, folks.  As she tapped him on the arm and appeared to be trying to break free.

This is the most — you know what I’m gonna do?  I’ve gotta fold this page.  I’m gonna show you this on the Dittocam.  Just hang on here a minute, folks.  I’ve gotta get rid of the identifiers on this page.  I gotta turn the Dittocam off and I gotta zoom in.  Hang on.  For those of you on the zoom you’ll see what I’m talking about in just in time.  We’ll post this picture at RushLimbaugh.com for those of you that don’t have it.  Okay, let’s see.  All right, we’re we go.  The Dittocam’s coming back, too.

So Biden just told everybody the guy with the nuclear codes is standing right over there and if you want to take him out or get the codes or attack him, Biden just pointed him out, and Trump’s supposedly this stupid idiot.  And Biden’s over there trying to tell everybody how stupid Trump is while bragging about how important he is. 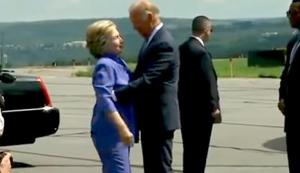 Biden just pointed out to anybody watching who he is.  You talk about stupid.  Yet these people get away with the reputation, the branding, the reputation that they’re brilliant and that they are compassionate and so forth.  So, anyway, Hillary doesn’t look good in this picture, either.  Looks like he’s having to hold her up.  It looks like he is actually serving as her brassiere.  I mean, that’s as sophisticated a way as I can describe the picture for you.