Louisiana, Mississippi, Milwaukee in Crisis — Where Are Obama and Hillary?

RUSH: So how many days have Louisiana, Mississippi been devastated with floods that have cost a lot of lives? Thousands of people have been displaced.  Do you know how many people have lost their homes in this flooding in Louisiana?  A lot of people.  In fact, even in the New York Post today, there was a story: An actor who lives in Baton Rouge lost his home.  It kind of ticks me off.  A lot of people lost their homes, and they didn’t get their names in the paper.  But an actor did.  His name is Wendell Pierce, and I used to love Wendell Pierce until I found out… 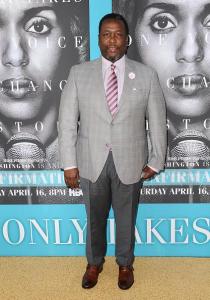 I’m sorry.  It just… I wish it didn’t.  In fact, there is a story that dates back to July, a guy by the name of Michael Bennett who plays for the Seattle Seahawks, showed up at a training camp practice wearing a Black Lives Matter T-shirt.  The reporters covering the team went, “Bzz bzz bzz bzz! Why, look at this!” Michael Bennett is one of the starting 22, so he shows up wearing Black Lives Matter shirt.  That’s a profound political statement.  So they asked Michael Bennett about it, and he said (summarized), “Yeah, you know what?

“There aren’t enough of us in the NFL that speak out on these things.  You look at the NBA.  The NBA, it doesn’t matter. Every player will tell you what he thinks, and it’s great.  But we, we in the NFL we got nobody with guts.  We don’t have people who’ll tell you what they think about their political views or social views,” and you know why?  Aaron Rodgers, the quarterback of the Packers said, “Yeah, the league doesn’t want us to. The league doesn’t want us screwing around with the brand. It’s just safer not to say anything.”

I have actually had conversations about this with people about why so many prominent athletes don’t.  Michael Jordan’s the most prominent, and he always said, “Look, Republicans buy sneakers, too.  Why tick ’em off?”  But the pressure is being brought to bear now on athletes to speak out, and particularly on NFL athletes, because they are the most silent.  The NBA… Bennett is right. The NBA is practically… There are no restrictions on ’em, and they’re all speaking.

“We are the conduit selling all this stuff, and, as such,” Michael Bennett said, “we need to start typing up and telling people what we think.”  So Cam Newton did.  Cam Newton, the quarterback of the Carolina Panthers, gave an interview recently published in GQ.  And he ticked a lot of people off because remember he had a meltdown in the post-Super Bowl press conference last year.  He didn’t want to talk. He was just depressed and angry and fed up that they had lost.

The last thing he wanted was questions, so he basically walked out of the of the press conference after a couple questions.  The coach defended him.  He was asked about that in the GQ interview.  He was asked about the criticism he got, and the reporter said (paraphrased exchange), “Clearly it was racist, right?  Clearly you got the criticism because you’re a black quarterback.” Cam Newton said, “No, no, man. We’re so far beyond that.  People have their opinions.  It isn’t due to race.”

Well, now the brothers are mad at Cam Newton for excusing or exonerating race as a factor in why he gets criticized.  They want race to be a factor, and Cam Newton kind of ticked ’em off by saying, “No, man, our country’s moved beyond that. Not everything’s about race.”  So as Aaron Rodgers and one other NFL player quoted, “Yeah, the league doesn’t want us to talk. We get the vibe, man. They don’t want us weighing in on these issues.”  Now, the reason I’m telling you this story is ’cause I kind of understand it from my experience here with Wendell Pierce.

And Michael Jordan does not want people being disappointed in him, and a lot of athletes don’t.  You’re never gonna get… Look at Brady.  Look at Tom Brady.  Trump tried to lasso him in, and he got a couple of steps, and then Brady put on the brakes.  Brady is never gonna… You will never know a single syllable of what Brady thinks about any of this, although I (chuckling) can tell you.  But he won’t.  For a host of reasons.

He’s got probably a career mapped out after his playing days that probably does involve telling you what he thinks about things. But he’s not gonna do it now.  I understand these guys that don’t want to get into the political commentary world because the country is such today that you don’t just have people disagree with you.  You make enemies.  You have people that get mad at you.  And particularly Brady… I don’t know this to be true. Let’s not use Brady.  Let’s not. Let’s take Aaron Rodgers.  I don’t like using anybody, ’cause it’s a hypothetical.

Take a star athlete in any city. Make up a name, a star athlete, and put him in a city where you think the guy is probably supporter of Republican causes, but when he opens up you find out he’s a huge lib.  Look at how many people are gonna be disappointed, let down, shocked, or whatever. Look at how much luster the guy’s gonna lose. They don’t want to do that.  I can understand that.  I can understand them wanting to remain aloof.  It’s like Colin Powell.  You know when Colin Powell — general, secretary, whatever else he was.

Colin Powell, at one time, almost ran for president.  He had a 73% approval rating.  He wouldn’t even identify the party that he was in!  He had a 73% approval rating.  The minute he identified as a Republican, that 73% became 60% — and then when he came out with his opinion on abortion, it ended up a little bit below 50.  Before anybody knew anything about him — when all he was was an image that had a brand that has been manufactured — he had 73% approval.  The minute he took a couple political stands, bye-bye — and he ended up not running, remember?  He didn’t go anywhere.

So I understand it.

Where’s Obama?  Where is he?  I know.  He’s up in Martha’s Vineyard and he’s playing his record whatever number round of golf as president, it’s over 300 rounds now, can’t be bothered.  Remember all the grief Bush got for flying over New Orleans and not landing there?  Remember the grief Bush got when all he did was fly over in Air Force One?  Obama hadn’t even gone, he hadn’t even made any pretense, and where is Obama in Milwaukee?

And do you know that the Department of Justice, long before this incident, is already taking steps to take over and take control of the Milwaukee police department?  So Trump has said he’s gonna go to Milwaukee.  I think Trump ought to go to Louisiana, too.  But he said he’s gonna go to Milwaukee, so the Drive-By Media, CNN, caught up with somebody in Milwaukee to ask ’em what they think of Trump coming in to Milwaukee.  This was Ana Cabrera, the correspondent on CNN, and they found a resident of Milwaukee named Lashonda Foster. 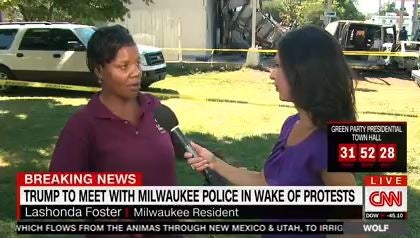 RUSH:  (imitating Foster) “So why’s Trump going?  He already rich.  What can he do for our community?  He already rich.”  We had a sound bite yesterday, you people there, you ticked off that the rich have all the money not giving it to you.  Maybe Trump wants to come give you some.  You don’t know ’til he shows up.   But Obama hasn’t been either.  Obama’s not gonna go.  Obama’s getting memos from on site.  Everything’s going as planned.  Yeah, this Obamacare, Aetna bopping out, part of the plan, mission accomplished. Black Lives Matter raising hell everywhere, mission accomplished.

RUSH:  Oh, no, course not.  Not to mention Hillary’s nowhere near Milwaukee.  Trump is gonna be in Milwaukee campaigning with Scott Walker.  But he’s gonna be there.  But you heard Lashonda Foster.  “Why is he coming?  What is he doing for our community?  For that matter, anybody community.  He already rich.  What could he do for our community that’s hurting right now?”

What can Obama do?  Obama’s already rich.  What can Hillary do?  Hillary’s rich. What’s that got to do with anything anyway?  Like I told you yesterday, it’s the way these people define trickle-down.  These people that vote Democrat are ignorant.  They’re ignorant because they’ve been lied to.  They really don’t know how economics function.  They don’t know what commerce is.  They really believe trickle-down is rich people giving money away.  And when the rich don’t do it, why, Reaganomics don’t work, Trigonomics don’t work, trickle-down don’t work.

These people, “Why Trump coming here?  He already got his money. What can he do for us in our community?”  They never ask, “What can we do for our community?” It’s just, “What can anybody come here and do for us? He not gonna do anything for us.”  See what the Democrats have done to these people?  They’ve taken their humanity away from ’em.  They’ve taken their whole notion of self-sufficiency, self-reliance, can-do spirit, all that stuff, vamanos.

RUSH: This Charlotte, North Carolina.  Hi, Carol.  It’s great to have us with us.  Hello.

CALLER:  Hi, Rush.  I’m so happy to talk to you.  What I want to say is, Hillary Clinton wants to bring in all of these foreign refugees, and I hear so many ads and see in my church how we collect food for the hungry in our country.  We have so many Americans that are hungry, and she wants to bring in thousands of refugees.

CALLER:  Well, I know why. For the votes, I guess, eventually.

CALLER:  But, I mean, why can’t people see this?  I just don’t understand.

CALLER:  Well, don’t they have any sense themselves that they can figure these things out?

RUSH:  They’re being dumbed down so much in the public school system for two generations now, Carol. 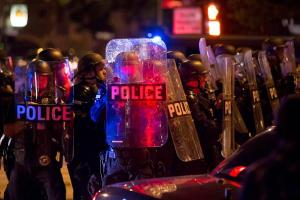 RUSH:  Well, you know, Obama’s pastor — a man by the name of Jeremiah Wright — said that all that excess food that you have is an example of white man’s greed.

RUSH:  And that you really don’t give it away to the people that need it, especially cruise ships. They throw it away and this kind of stuff.

CALLER:  Well, restaurants around here… I’m not gonna name them, but all the food that they have left at the end of the day is donated to the hungry here in Charlotte.

CALLER:  Oh, yes.  And Publix. They donate all of their bread.

RUSH:  You wait ’til the agriculture department hears about that and they’ll be on their case for giving away leftovers, violating health standards.

CALLER:  Oh no! Oh. Well, they do.  They collect food. Everything that’s left at the end of the day is given to the poor.

RUSH:  It’s actually kind of sad that there’s that much need, but that’s another thing.  Why is there that much hunger?  Why, in a country with this abundance? And see, what the left will tell you is, “Well, it’s because rich are hoarding everything and they’re not giving it away, and they’re not sharing it.”  That, of course, is not anywhere near the proper explanation for it.  But your frustration’s felt by untold millions of people, Carol.  Your question is THE question: “Why don’t people see X?”  It really is.