What to Expect in the Presidential Debates (Although That’s Not What the Caller Asked, People)

CALLER:  Hey, Rush, it sure does seem like the individuals in the press are individually vying to become the Candy Crowley of 2012.

CALLER:  Yeah, they’ve taken it to a new level.  Hey, what I wanted to ask you — and I know you’re not an official adviser to Trump.  I’m sure they’re listening, though.  And this goes back to something that you’ve said over the years. I wanted to tie it in to how Trump should act toward, um, different people.  You’ve often said that when somebody first meets somebody and gains an impression, they don’t remember what that person said to ’em.  They remember how that person made them feel.

RUSH:  Exactly.  That is the old actor’s credo.  It is a guiding principle of people who act for a living.

RUSH:  In the first place, your question is very shrewd.  You are a very shrewd individual, because one thing that you have obviously recognized is the simple fact that while you and I and many millions of others have taken the time because of our habits and our desires to become educated, we know who Hillary Clinton is, we know who Bill Clinton is.  But there’s a whole mass of people who don’t.  She’s just the Democrat nominee running to be the first [female] president. Her husband’s Bill Clinton. He was a great president, a good guy. Yeah, he had the problem with the affair, but what guy doesn’t. And they’re not anywhere near the depth of understanding that you are on Hillary.

You want to hear what you know exposed.  But you’re afraid that somebody goes out and does that and people that don’t know that about Hillary are gonna say, “Oh, my God, that’s just not fair. She’s not that bad a person, don’t talk about her that way,” ’cause they don’t look at politics the way you and I do and you’re afraid that it might rub people the wrong way and create a bad impression whoever launches into Hillary that way.  That pretty much sums up your fear about this? 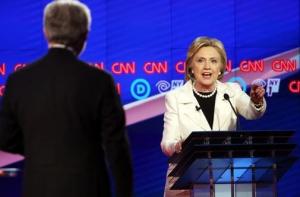 And I think this is the eternal question, because every candidate has different tiers of support.  Another way of expressing this would be conservatism.  A lot of us want candidates to go out there and make no bones, excuses for it and just start teaching people about conservatism, just explain who the liberals are, and don’t hold back, and properly identify ’em, explain what conservatism is.  And then when they don’t do it, we start questioning whether or not they really are conservative, whether they actually understand it, when in fact what they may be doing is realizing that most people do not live their lives by defining who people are ideologically.  They have to be approached in any number of ways.

But, see, my problem in that example, I’ve always believed that conservatism is the way most people live their lives anyway, whether they know it or not.  The principles of conservatism are generally what guide law-abiding people.  And then you’re down to branding.  If conservatism has been portrayed as a collection of real, just stuffed shirt geeks and nerds who don’t want anybody to have any fun, if that’s how conservatism’s been created as a brand to people that don’t understand it, well, then a candidate’s gotta go easy on it.

It’s a tightrope, I think, for all these people.  I think the best bet is that he’s gotta have faith that the ardent supporters like you are gonna hang in there while he goes out and does what he has to do to get others to join.  I could ask you point-blank.  Here he is ripping into George W. Bush during the debates. In open state primaries he’s actually making an appeal for liberal Democrats to cross over and vote for him by sounding like Democrats when he started talking about George W. Bush and Jeb Bush.  And we all winked.  “Yeah, we know what he’s doing, yeah, yeah.”  We looked the other way because he’s out trying to expand his voter base.  So I think that’s probably the position you find yourself in now.

RUSH:  I got some emails from people saying, “Rush, you blew it.  The guy was asking you how Trump ought to behave during debates.”  I didn’t hear him say anything about debates!  I’ve gone back, I’ve looked at the transcript of call, and I can’t find it, which ticks me off about you people.  I thought I gave a great answer and here you are telling me I missed the point ’cause the guy was… Look, as for how Trump ought to deal with her in debates, that’s not gonna happen ’til September 26th, and I know exactly what Hillary’s gonna do in these debates.

She’s gonna try to outwonk Trump to show her qualifications, the intimate knowledge of how government works for people. She’s gonna illustrate that Trump doesn’t know what anything is. The GI Bill, the Restoration of Turtle Lights Act of 1845. She gonna know all that esoteric crap, and she’s gonna start talking about it as though she’s got intimate knowledge and Trump is gonna “ba-da ba-da ba-da,” and there’s a way to deal with this, but I’m a formal or informal adviser.  And I don’t want to be.  Don’t misunderstand. 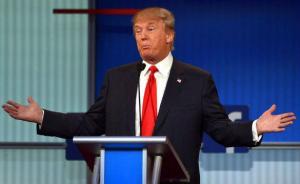 They’re gonna try to take examples of what they think Trump has said that makes a fool of him and ask him to repeat it, in trick ways, while Hillary is gonna be acting like, “This poor man. I don’t even think I should be here. I… I…  He’s just so unqualified!”  “He doesn’t even know what we’re talking about here, John,” she will say to the moderator.  “You know, I think I’ll take a break.  I’ll just let Mr. Trump have the floor for ten minutes.  I got some things I can do backstage, and I’ll be back.”

I wouldn’t put anything past ’em, as they try to portray Trump as just so far out of his league.  Unsuitable.  Not the right temperament.  Unequipped.  Ignorant about how government works.  “Mr. Trump, do you really think all Mexicans are rapists in — and not just Rosie O’Donnell, but all Mexicans. Do you think that they’re rapists?” You know damn well that’s how these questions are gonna come out, and the questions Hillary Clinton’s gonna get? “Mrs. Clinton, do you think you’ll be able to effectively build on the great success President Obama has had on our economic recovery, and how will you do it?”

(interruption) You… (laughing) Well, he’s already said that he wants moderator approval.  Some of them are not gonna be acceptable to him.  Yeah, I think if the candidates have… I don’t know what all the rules are in terms of what they can demand moderator-wise and so forth.  But, look, this all gonna play out once we get closer to it, and I’ll be able to address in a much more informed manner than that. Right now, we’re just speculating — educated speculation,m nevertheless.  It’s pretty easy to figure what some of the things are gonna happen are.  And we know — we know — that whoever the moderators are from the Drive-Bys, they are going to try to end the Trump candidacy on September 26th.

They’re gonna try to end it that night, the night of the first debate.