RUSH: Let’s listen to a little bit of Trump.  This was in Austin last night and we’ve got some bites from what many are saying was another great Trump appearance.  Here we go.

RUSH:  The crowd went nuts there.  Trump’s back at it.  He’s in Tampa with another appearance at this moment.  Last night in Austin, Trump refined his outreach to African-Americans.

TRUMP:  The percentage of black Americans in poverty has grown under Obama, the Census Bureau reports, from 25.8% in 2009 to 26.2%, up too much, too much.  The number of blacks on food stamps soared under Obama to 11.7 million people in 2014, up 58.2%.  (crowd boos)  Also, from Obama’s arrival through last June 30th, the percentage of black Americans who own homes plunged 41.7%.  Nearly four in 10 African-American children live in poverty.  That’s no good and not fair.

RUSH:  And he kept on, folks.  He’s not deterred.  He continued on this same line.

TRUMP:  Fifty-eight percent of young African-Americans are not employed.  Homicide is up nearly 50% in Washington, DC, and up more than 60% in Baltimore and up throughout all of our inner cities.  Violent crime rose 17% in the 50 largest US cities.  This is the legacy of President Obama and Hillary Clinton.  It can’t get any worse.  To those suffering I say, “What do you have to lose in trying Trump?  What do you have to lose?”  I will fix it.  I will fix it.

RUSH:  Okay.  There you go.  Now, here’s a Trump audience going nuts over the prospect of improving the lives of African-Americans.  They’re applauding it.  They’re all for it.  We conservatives are all for everybody doing better.  We want great things for everybody.  We want everybody accessing every opportunity that they can.  We’ve been the greatest country on earth, it’s got incredible bounty, we want everybody experiencing it.

Now, in the last couple of days I have been commenting on this, and I found that many conservatives disagree with me.  I have been, for the most part, thinking Trump, this is a good outreach, and most people are saying, “No, no, Rush, this is not the way to do it.  This is demeaning, this is humiliating. This is Trump telling African-Americans how rotten their lives are. Even if he is trying to blame it on Democrats, this is not the way to do it. It shouldn’t happen.”

And I think to myself, if I were trying to outreach to African-Americans as a candidate I’d do something similar.  You know, I’d ask ’em, “You’ve been voting Democrat your whole lives and then some, and what’s it gotten you?” (interruption)  Well, I know, that’s the thing.  But I found this actually addressed last night as I was digging deep into show prep for today. Somebody actually went to a group of African-Americans and asked them how they are reacting to Trump. 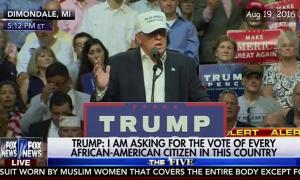 So I ran across this, I don’t remember specifically what it was, and I was in the middle of something, I was on an iPad, I couldn’t print it at the time, but I remember it.  It was a story interviewing several African-Americans, and they were asked to respond to Trump’s pitch.  And it was exactly, it was exactly what my wild guess assumed it would be.

They don’t care what Trump’s saying because they don’t really think he cares, because he’s a Republican.  And they admitted, the people in this story, the African-Americans in the story admitted, “Yeah, but at least the Democrats care.”  It didn’t matter to them that Democrat Party policies, not only have not worked, they probably have made things worse, it didn’t matter, the results, the actual reality, life on the ground, didn’t matter.

The reason that they are not gonna abandon Democrats is because in their minds the Democrats care more.  The Democrats care for real.  And they think Trump is just saying this stuff.  Now, that is the result of 50 years of branding or more.  So simply reaching out, apparently, and expressing your desires and your hopes for African-Americans as a Republican is not nearly enough.  I don’t know what is, but apparently that’s not the way to do it.