CALLER:  I’m doing fine, thanks, Rush.  I had a question for you.  I wondered, do you make a distinction between people who are voting, or will vote, for Donald Trump and those who support him?  I listen to your show, and you use different terms at different times.  I’m just wondering if you see a distinction there.

CALLER:  So the folks who are voting for Trump, not supporters, do you view them as anti-Hillary votes?

CALLER:  I think a Trump voter is someone who, a year ago, would not have voted for Donald Trump, but today will simply for pragmatic reasons.

RUSH:  And what’s a Trump supporter?  Somebody that’s been with him from the day he announced?

CALLER:  Yeah, and I think that’s a smaller group, but I think there are people who’ve been with Trump from the beginning.

RUSH:  I think they’re the majority of them, in fact.  You obviously think there’s enough of a difference between a Trump voter and a Trump supporter.  You have a point to make about this; what is it?

CALLER:  It really was a question.  I wondered if you saw a difference because of the different terms that you use when we’re talking about Trump support and the election.

RUSH:  I’m not aware of using different terms.  I guess that’s my — are you talking about when I use Trumpist and a Trumper —

RUSH:  A Trumpist is just a term to describe.  it sounds better than Trumper, to me.  A Trumpist makes them sound intellectual.  A Trumpist is a devoted supporter and understands what he or she is doing.  A Trumper is just different sounding, better sounding, I think.  I’ve even had some Trumpists tell me they don’t like the term.  They think it’s derogatory.  Well, you know, I got a friend in Hawaii who’s a huge, huge Trumpist but doesn’t like that term, tries to talk me out of it, which just makes me use it all the more.

But, no, don’t draw any inferences from the different ways I describe — I think most Trump supporters — what you’re basically asking me is active versus passive.  And I’ll give you what that means, I’ll define that for you in terms of radio listeners.

You get into an elevator and there’s music playing.  You hear it, but you’re not into it.  That is passive.  The television set’s on while the family’s sitting around having dinner or talking.  Nobody’s watching TV; it’s there; they’re aware of it, but they’re not participating.  That’s passive.  You’re in the car, you’re talking to somebody, the radio’s on, music’s playing, you’re not really listening to it; you’re aware of it; that’s passive.

There is no passive listenership to this program.  That’s what makes it good.  When you listen to this program, you are a hundred percent engaged, you are active.  And I think most people supporting, voting Trump are actively engaged in the campaign.  I think they’re actively engaged in supporting Trump.  And I think they have active reasons for it.

The active Trump supporter is the Trumpster who can tell you exactly why.  And if you tell the active Trump supporter that you don’t, he will try to convince you to change your mind.  That’s an active Trump voter or supporter.  Every candidate has passive support.  It’s just people that are gonna vote for him no matter what.  There’s an R by his name so he’s gonna get the vote.  Hillary has a lot of passive support.  In fact, I think most of Hillary’s support is passive, if you want to know the truth.  What is there to get excited about?

But in terms of active, “Gee, I really want Hillary because I can’t wait how she’s gonna make America better. I believe in Hillary so much, she’s got so many great ideas, she’s got such great plans.”  I don’t know how strong all of that is with her.  That’s why I’ve always thought she’s vulnerable.  It’s why I’ve never been afraid of her. But I’m telling you, I’m in a minority there on the Republican side.  I can’t tell you over the years the number of people I’ve run into literally scared to death of Hillary.  I think it results from the presumption — or I should say the assumption of unmitigated raw power the woman has, and people are very much worried about the Nurse Ratched characters of her personality.

In fact, I’ll tell you this.  I think the people that oppose her are more actively opposed to her than she has active supporters.  Now, you might think this is crazy.  I can see some people, “What are you talking about, Rush, look at her leading the polls.”  I know, folks.  But I think Bernie Sanders would be doing just as well.  And I’ll tell you if Bernie Sanders was the nominee, the Democrat campaign would have 10 times the energy it has.

If Bernie Sanders was the nominee, wherever he went, the crowds would be big and you’d be scared to death of them.  You would be worried sick.  There’d be so much energy, and those people would be running around and they’d be doing nothing but working for, campaigning for, marching for, protesting for Bernie Sanders.  None of that is ever gonna happen happen with Hillary, unless they pay for it, unless they buy it.  And it’s for this reason I’ve always thought she could be beaten.  Not to say the loyalty to her is weak.  The loyalty to her is party loyalty, and by the way, she has a lot of support simply based on the fact that we are despised, folks, conservatives, Republicans are literally hated, irrationally and inexplicably.

I don’t know how much of a Trump Effect there is.  You know, the Wilder Effect, Doug Wilder, black candidate running for governor in Virginia, the polls all said the guy was gonna win in a landslide.  Turned out not to be true.  The explanation was that a bunch of people had lied to pollsters.  They had told posters that they were gonna vote for Wilder so that the pollster would not think that they’re racists so they lied and said, “Yeah, yeah, yeah, I’m voting Wilder, who happened to be African-American, but in through they didn’t.

On the Trump side, I don’t know if there’s a Trump Effect where people do support Trump but are afraid to say so ’cause they don’t want to be lectured or criticized or made fun of or thought of poorly by the pollster.  No way of knowing that.  I do, though, think that there are Trump supporters that nobody knows.  I don’t know how many. I don’t know if it’s a significant number to make a difference. They obviously would appear to be passive, but I think in their hearts they’re very excited and invested, which is why I’ve always thought Hillary — I don’t mean to be repetitive here, but this is the basis for my theory that Hillary can be beaten.

I guess the best way to say this for me, there doesn’t appear to be any evidence like there was with Bernie Sanders. If it weren’t for the superdelegates she wouldn’t be the nominee, if you get right down to it, the odds are.  Anyway, I appreciate the call.  This is a great example of a caller making a host look good.  He had no idea he was gonna do that.  He thought he was gonna stump me, but see how this stuff works?  Really great.

RUSH:  Donald Trump’s in Manchester, New Hampshire, in the midst of a campaign rally.  He’s on the teleprompter.  We’re gonna join a little bit of it in progress right now.

TRUMP:  She created a private — (crowd chanting, “Lock her up.”)  She created a private illegal email server in order to hide her corrupt dealings.  That’s all it is, folks.  Very simple.  She knew what she was doing a hundred percent.  She did so knowing full well it would put American lives at risk by making classified information highly vulnerable to foreign hacking.  And that’s what happened.  And, by the way, people that did 2% of what she did, their lives have been destroyed. 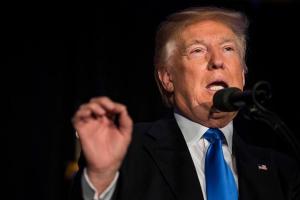 TRUMP:  But she didn’t care.

TRUMP:  As long as it helped her get away with her crime, no risk to America was too great.  It didn’t matter to her.  And now she’s running for president.

TRUMP:  Then, to further cover up her crime, she deleted 33,000 emails to keep them out of the hands of the authorities and the American public.  As a further element of the criminal cover-up, she claimed, under penalty of perjury, that she turned over all of her work-related emails.

TRUMP: We now know this to be one more massive Clinton lie and deception.  The FBI found thousands of work-related emails she failed to turn over, including the new discovery this week of 15,000 more work-related emails she did not disclose.  What is being uncovered now is one of the most shocking scandals in American political history.  It’s Watergate all over again.  It’s Watergate.

RUSH:  Whoa.  Donald Trump in Manchester, New Hampshire.  We’re jipping it for a while to see where it goes.  It’s on teleprompter.

TRUMP:  And she’s totally protected by our government.  As secretary of state, sold her office to corporations and foreign governments —

TRUMP:  — and then she went to great lengths to hide, delete, destroy, and lie about the evidence, just like her lie that she never sent any material marked classified.  Total lie.  Lie after lie after lie.

TRUMP:  This is the corruption we expect to see in a Third World country, but not in the United States of America.

RUSH:  The crowd is loaded for bear, folks.  You can hear it.

TRUMP:  Just imagine the damage to our security, to our integrity, to our standing in the world — and believe me, the world is laughing as they watch — if Hillary Clinton is allowed to sell the Oval Office in the same way she sold her office as secretary of state, and she can’t help herself.

RUSH:  She’s already been doing it.

TRUMP:  We cannot let this happen.  Can’t let it happen.  We must vote on November 8th to keep the American government from being sold to the highest bidder. 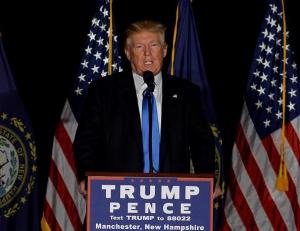 TRUMP:  And, by the way, folks, if you’re looking at the poll numbers, take a look, we’re doing very well.

RUSH:  The connection right there, that’s how he does it.  Everybody misses that.

TRUMP:  So vote to protect your family. Vote for honesty, integrity, and accountability.  Now, as all of these revelations have been discovered, some this week, many this month, Hillary Clinton has been hiding, she’s been hiding.  Where is she?  Although I hear for the first time in a long time she’ll be making some kind of a quick statement tonight.

RUSH:  In about a half hour.

TRUMP:  — not to take the responsibility for her unethical and criminal conduct, but instead to make one of the most brazen attempts at distraction in the history of politics.  Now, I’ve not seen what Hillary is going to say, but I’ve heard about it.  And in a sense, I don’t want to dignify her statements by dwelling on ’em too much.

RUSH:  Okay, we gotta bump out, but I think what he’s referring to here is she’s got a video out, an ad that pretty much claims that Trump has got the support of the KKK and is a white supremacist and racists are behind his candidacy and so forth. She’s in Reno.