RUSH: Now, Trump, when we had to break away from covering his appearance in Manchester, New Hampshire, he made reference to the fact that Hillary is gonna be speaking soon.  She’s in Reno.  She’s scheduled to speak in 25 minutes.  And he said he didn’t want to dignify what she’s going to say by talking about it and reacting to it.  Well, what it is, she’s got an ad that is running, and it ties Trump to the KKK, to the Ku Klux Klan.

Now, what the ad is, it’s got a guy wearing the pointed hat and the robes. He’s identified as the imperial wizard of the rebel brigade knights of the Ku Klux Klan.  And in this video that is a Hillary ad, he says the reason a lot of Klan members like Donald Trump is because a lot of what Trump believes we believe.  There’s a Confederate flag fluttering in the wind, Trump waving after a speech, and a guy performing a Hitler salute at what appears to be a Trump rally.  That is the ad that Hillary is running.

Now, I don’t know if this Klan guy is a legit Klan guy or an actor, but Hillary is running the ad.  Now, Trump just called Hillary a bigot because she only views minorities as voting blocs.  This ad was in existence long before it was in production and planning stages, long before he called her a bigot.  He’s called her a bigot, and the rest of the Democrat Party, for just using African-Americans, taking them for granted, promising them things they never deliver on, and then scaring them every day about what will happen to them if they don’t vote Democrat. Warning them of all the perils and pitfalls that await them if they don’t elect Democrats.

The Klan was the military wing of the Democrat Party back in the segregation days.  The Ku Klux Klan is a Democrat entity.  It has always been.  In fact, there was even a member of the Ku Klux Klan in the United States Senate.  His name was Robert Byrd and he was a Democrat from West Virginia.  And the ad is despicable.  You want to talk about new lows in American politics or the politics of personal destruction, but this — and I don’t know if this is a legit Klan guy.  And I don’t know how the Clintons would know him.

Okay, so you got this legitimate Kleagle beagle whatever in the Klan, and the Clintons know how to get in touch with the guy, make an ad out of it. Or did this guy just happen to make a speech somewhere where the Clintons just happened to get hold of the video of it.  But it’s a little bit too convenient, isn’t it?  Some Klan member.  The Klan has to know that they don’t help anybody.

So here’s the Klan, this Kleagle beagle member standing up singing the virtues of Donald Trump.  I think the whole thing is suspect.  But that’s I think what Trump was alluding to.  Now, we know that Hillary plays the race card and we know the Democrats play the female victim card.  But for somebody that’s running way ahead, I mean, the Democrat Party’s putting it out there the race is over, that they’re basically coasting, that all they have to do is, you know, not make any mistakes. They don’t have to be aggressive ’cause Trump’s imploding.  Why run something like this if you’re that confident that you’re going to win and win big?

Here is Jeremy in Mayfield, Kentucky.  Glad you waited, sir.  You’re next on the Rush Limbaugh program.  Hi.

CALLER:  Good afternoon, Rush.  Am I coming through loud and clear?

CALLER:  So I have a question and a comment on Hillary addressing in her speech today the support that Trump receives from what she calls the alternate right and how you think that this is gonna affect his campaign and also wanted to see what your definition of alternate right is, because I asked the question, I asked for a definition because you know, I’m a traditional Christian, (unintelligible) conservative.

I’m for pro-life, traditional marriage between a man and a woman, and America first policies, which consist of nonintervention, fair trade, and immigration control.  So these are all my views, and a lot of conservative Christians share that view, and this would have been the mainstream view in pre-1965 America, and now it’s considered almost a counterculture view.  Whereas, you know, back in the Baby Boomer generation, the neocons today would have been considered counterculture. So how do you define alternative right? 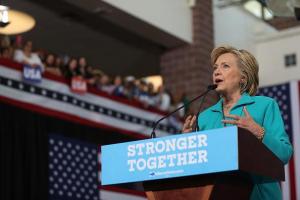 I don’t think the Alt-Right is strictly the way you described yourself.  The way you describe yourself is essentially the way Salena Zito in that op-ed in the Pittsburgh paper I mentioned a couple of days ago driving through Pennsylvania through the towns that are not major population centers.  That’s basically the people that she was describing that had Trump signs in their front yards and backyards and along the streets, and she saw hundreds of them.  And I don’t think she’s talking about Alt-Right people.  What do you think Alt-Right is?  What have you heard people say about it?  What is your impression of it?

CALLER:  As I look it up, I see a large spectrum, mainly the groups that you’ve named, but as people with my views see aggressive immigration and the fact that the left wants us to take in all of these refugees, we see a point where we, as European Americans, may need a voice, just like you have a voice for all other ethnicities.  All ethnicities should have a chance to voice their needs and should be able to prosper.  And European Americans are no different.  And if we continue this immigration on the route that the left wants it to go, especially Hillary Clinton, I believe that we’re gonna be soon, minorities.

RUSH:  What we’re dealing with here, within that framework that you just described, you call it European — I forget what term you used.  But the left, it would really help if everybody tried to understand that the modern American left does not like America as founded.  They believe it was founded unjustly, immorally. That it was a slave state and it was rigged against all minorities.  It was set up for rich white people to remain in power in perpetuity.  It’s what they really think of the American founding.  And it is their objective — Obama only talks about transforming America is what it means.  It means transferring power to all of the various minorities as a means of paying them back for all the grief they’ve suffered at the misfortune of being born in the United States.

And, as such, the method whereby they accomplish this is to portray themselves as open-minded and compassionate and tolerant.  And they portray every one of these groups as victims, victims of America.  And they have succeeded in persuading a lot of Millennials that they’re right.  There is a lot of white guilt running around out there now, white privilege is prevalent, the problem of white privilege on college campuses and so forth.  So they’ve been very successful in this.  And I think that’s what you are noticing.

So the Alt-Right, in their view, would be made up of people, that’s where the white supremacism charge enters, along with populism and nationalism.  And basically just trying to portray you as your time is passed. You guys are old-fashioned fuddy-duddies. You’re from an America that was unjust when it existed, and we’re never gonna go back to it again. We’re finally getting it right. You guys had your day, and just slink away now and forget it.

It’s the modus operandi of how the left is attempting to win minds and hearts here on the basis of compassion and understanding and tolerance of victims and paying them back for all the suffering they’ve had to endure.  Anyway.  I appreciate the call, Jeremy.

RUSH:  Okay.  Grab sound bite number 23.  We’ve got the ad.  Now, folks, I’ve not seen this.  I’ve got the transcript here.  It’s a minute, it’s a one minute ad.  I don’t know how much of this lends itself to audio.  We’re gonna discover this together.  It looks like the transcript I’ve got is one sentence, so I’m hoping there’s more to this than just one sentence, but if that’s all there is, don’t worry.  If it’s all just music and we can’t see anything, then I’m not gonna waste your time on this.  This is Hillary’s Klan ad.  Let’s see.

IMPERIAL WIZARD: The reason a lot of Klan members like Donald Trump is because a lot of what he believes, we believe in.  Donald Trump would be best for the job.

MAN:  I am a farmer and white nationalist.  Support Donald Trump.

JARED TAYLOR:  Sending out all the illegals, building a wall, and a moratorium on Islamic immigration.  That’s very appealing to a lot of ordinary white people.

DAVID DUKE:  Voting against Donald Trump at this point is really treason to your heritage.

JAKE TAPPER:  Will you unequivocally condemn David Duke and say that you don’t want his vote or that of other white supremacists?

REPORTER:  A campaign chair that ran a website that has become a field day for the Alt-Right, which is racist and all sorts of other ists.

REPORTER:  The Alt-Right, which is a sort of dressed-up-in-suits version of the neo-Nazi and white supremacist movement.

MAN:  A lot of what he believes we believe.

RUSH:  So the Alt-Right is depressed up Nazism wearing Klan robes.  Breitbart is Alt-Right?  Is that what they’re trying to say here, that Trumpbart news is part of the Alt-Right, they’re a bunch of white supremacists?  These people are full of it.  It’s what they do.  Any branch that they think is right wing is automatically gonna get tagged as racist.

So that’s the Hillary ad that features the Ku Klux Klan grand beaver Kleagle doing whatever he’s doing talking about, “Oh, man, that Trump guy, everything we believe in, Trump believes in.”  That’s exactly right.  Desperation time apparently for the Clinton campaign.