My Response to Colin Kaepernick

RUSH: Colin Kaepernick, the third string quarterback for the San Francisco 49ers, everybody’s had their say about this, and I want to weigh in with my response.  And it’s this from Ray Charles.

We sometimes forget it. We’re born here, we get caught up in disagreements, fights, arguments, easy to lose perspective when we haven’t lived elsewhere, when we haven’t experienced what 95% of the world’s human population has had to live through since the beginning of time.  We are the lone exception, and our existence has charted a new course for humanity the world over.

And I think it would serve us all well to just take a moment and thank God, or whoever you thank for your existence, that you are an American, given all these other things.  It’s a shame, and I’ve warned of this coming.  I’ve warned of the politicization of everything.  There now doesn’t seem to be a single aspect of life in the United States that is not touched, that does not become controversial, because of race.  Thank you, President Obama.  Even the national anthem has now become a matter of race.

It’s ironic that we have now a quarterback who was adopted and raised by a white family, who was scouted and signed by white scouts, was employed by white owners, the National Football League, decides now to steal the stage of the National Football League to make personal statements during the week he is about to be cut from the team because of his inability to play.  I don’t now know if he’ll be cut.  It’s a question for the 49ers to deal with.

But, look, these See, I Told You So kind of people, these nah-nah-nah-nah types, I’ve had my tendency to be one, but I have warned everybody that this was coming.  I’ve warned everybody that the politicization the left has engaged in and this anti-American, transform America, America’s unjust, America’s immoral, I have been trying to sound the clarion for eight years about what we are headed for.  We’re smack-dab in the middle of it now.

And I want to share with you something I wish I had written, something that was on Twitter. I was not on Twitter, but somebody was and sent this to me.  See if this doesn’t describe it for you.  Colin Kaepernick does not stand for the national anthem.  St. Louis Rams players can run onto the field with their hands up mimicking “hands up, don’t shoot,” something that did not happen in Ferguson, Missouri.

While he can do that, while the St. Louis Rams players can run onto the field with their hands up mimicking “hands up, don’t shoot,” the Dallas Cowboys were denied by the National Football League their request to put a sticker on their helmets this season to honor the five police officers killed in Dallas.

So the Cowboys can’t do that. It’s too provocative, no freedom of speech there.  League turned down the request.  The Cowboys won’t be honoring the cops there and elsewhere, but Kaepernick can do whatever he’s doing to plaudits, to acclaim, to cheers and all these other expressions against America, tolerated, applauded, accepted.  We’re told we must understand.  But using the stage of the National Football League or your own individual stage to honor police, the United States military, often is now so controversial that the safest bet for you is to not do it.

Now, I’m one of these people that think’s Kaepernick has every right to his opinion but, you know, there’s something else that is curious to me.  The coach of the 49ers is Chip Kelly.  He is from Oregon University by way of the Philadelphia Eagles.  When this all came up, Chip Kelly said (paraphrasing), “I can’t tell a guy what to do.”  You can’t?  You do every day.  You give ’em bed check. You give ’em curfews. You tell ’em what time they have to show up in the morning and if they don’t, ostensibly they’re in trouble.  Adults used to tell kids what to do all the time because the kids hadn’t been alive long enough to know right from wrong, good from bad, appropriate from inappropriate.  The coach is the adult.  The coach says, “It’s not my job, can’t tell a kid what to do, I can’t tell a kid what to think.”  He didn’t say what to think.  The point is, nobody wants to tackle it.

What would the next step be after this?  Maybe refusing to permit any honoring of the military before or during games? “Yes, because, you see, sometimes innocent people are killed.  And we have turned our military into mass murderers, in effect.  They come back from where we send them incapable of coping with structured, peaceful life.  We are condemning our military men and women to come back monsters!”  I can see that coming.  I can see that happening.

But if you want to speak out in other ways, you’re gonna have all kinds of people climb on your case and try to intimidate you or bully you into shutting up.  And it’s been working.  Remember, this is not the end of something.  This is the continuation of what has been going on, well, depends on how far you want to go back. It certainly has been going on the past eight years with intensity. But even prior to that, the left was on the march with their complaints.  We have two Americas now.  I remember seeing a protest sign, a big sign being carried at some protest. 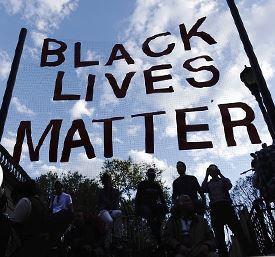 Six of one, half dozen of another.  But still, the truth can’t be denied, and it would serve everybody well to remember it.  We are the luckiest people at any time in human history, the luckiest people. Americans — in 2016 approaching 2017 — are the luckiest and the most fortunate people in the history of humanity.  It’d be great if more people just realized that. They could just accept that and build on that, build on something.  ‘Cause I’m tired of tear-down. I’m tired of it. It’s unwarranted. It’s unjust. It’s unnecessary. It’s destructive, and dangerous.  We need to build on.

RUSH:  No, I was dubious of the Muslim aspect of this when I first heard it.  Kaepernick is not Muslim. As I expected, he was baptized Methodist, confirmed Lutheran.  He’s got tattoos all over his body with Scripture.  Anyway, that’s not the point.  I just wanted to stress this, because somebody thought he was in the process, but I’d not heard that. So best we could learn that that’s rubbish.  But while I was reacting to the Kaepernick story — the Kaepernick caper — in the opening monologue of today’s program, at that very moment on San Francisco TV, KTVU Fox, they were discussing this.

NEVIUS:  I think it’s inevitable. It’s gonna have to have some impact on his efforts to make the team.  He did a 20-minute interview. As someone pointed out, this is Monday; the talk shows are just getting started nationally.  What does Rush Limbaugh say about this? What does conservative radio say about this?  This could have legs nationally.  This may be only the beginning of Colin Kaepernick giving his interviews talking about these things, and he’d better have his talking points down.

RUSH:  Okay.  So the opinion in San Francisco, in the San Francisco Chronicle is that it depends on this program, “conservative talk radio.” What do we have to say? Well, you can go to RushLimbaugh.com — which should be posted already or very soon will be — and read the nuts and bolts of the first-hour monologue on this subject.