Our Ongoing Effort to Explain Trump

RUSH: Here’s Sheryl in Wilmington, North Carolina.  She was on hold for most of the program yesterday. We ran out of time. So she graciously gave us her number; we called her back.  How you doing?  And I appreciate your patience here.

CALLER:  I’m doing great.  First-time caller, very longtime listener, and I thank God every day that you’re still out there being able to do what you do.

RUSH:  Thank you.  I appreciate that more than you know.

And there is a difference this time around with the people that I talk to, the things that they say. It really surprises me that they’re actually coming out and being so blunt with me as they are, and that their concerns are exactly mine. It’s so crazy how resonant it is when I talk to somebody who ends up being a Trump supporter.  He might not have been the first choice in the world, but, you know, it is what it is.

And these things that the media pick on with Trump and what he says and trying to say things about flip-flopping this immigration issue and these other policies? They are just nitpicking at his words.  And to me it displays nothing but a lack of common sense.  Some of the things that I hear these media people say — and you had a caller on yesterday who made that comment, you know, he’s gonna lose his base, flip-flopping. It only takes common sense to read between the lines.  And the big deal is this…

RUSH:  Well, wait.  Let’s go back to that caller, because the caller was in part chiding me and in part chiding Fox News, because his specific complaint was that during the fall campaign, Trump kept assuring people that illegal immigrants were gonna be rounded up and deported.  He kept saying, “They gotta go! They gotta go! They gotta go back.” And all the other candidates were out saying, “It’s not gonna happen! We’re not gonna round up 11 million people. We’re not gonna do it. I’m telling you truth and he’s not.”

And so Trump goes on and gets the nomination.  Now that the media is reporting Trump is flip-flopping on this and may not send ’em back, that guy called yesterday. He was livid that some in the media — including me — didn’t call Trump out on it at the time.  And you’re calling that nitpicking? I’m not arguing with you.  I am just recasting what this guy said so people know what you’re referring to, and you’re saying that that’s nitpicking, that that’s not the point. Whether Trump’s gonna deport them or not, that has nothing to do with why you support him, right?

CALLER:  And you answered it, Rush.  You said they don’t care.  And that is so true.  Those are minor details to the majority of people who are supporting Trump.  And it’s the same thing with the tax return thing.  I do not care what is in Donald Trump’s tax returns.  You know why?  Because he’s not a career politician.  He made his money in the private sector doing something else, and I don’t care where his money came from or what his tax return says.  If he were a career politician, I would say that it is required.  But I just don’t feel like it is a big deal.

RUSH:  I have tried — and I’m sure you’ve heard this if you’re a regular listener. I’ve tried all last fall to explain to people why people like you and others support Trump and why you’re not gonna abandon him.  I got blue in the face trying to explain it.

CALLER:  I know you have.  And there is an energy here, Rush. They had a… I didn’t go to it.  I actually drove around.  He had a little rally here a couple of weeks ago, and I thought, “Well, I’m gonna go drive around the building and look at it,” and the energy and the spirit that you can just feel was just electric. You can see the people looking at each other that were… This is the thousands that were outside of the building that never got in, that stayed there. 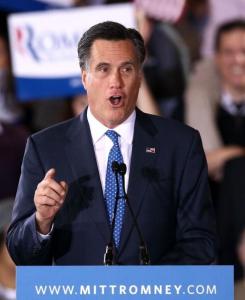 RUSH:  Well, the Romney excitement was in the last week.  It was not throughout.  It was just the last week — and predominantly in Colorado, actually, if you want to get specific.

RUSH:  Let me go back.  One of the things that I’ve tried to explain to the media and the political professionals of many years… It’s tough for them to get outside the bubble that they live in.  I mean, to them politics is a science, and it is a behavioral system, and there are certain things — there are rules — and if you flip-flop on an issue, you’re dead; you can’t survive.

CALLER:  If you’re a politician.

RUSH:  And if it’s your number one issue? “Oh, my God, you’re finished! You’re over with!” And they thought that’s what Trump was doing when they thought he was flip-flopping on deporting 11 million people.

RUSH:  And even… (crosstalk) Wait.

CALLER:  There are so many details.

CALLER:  Go ahead.  There are so many details surrounding something like that.  There is no way on God’s green earth — especially when you have experience from a business perspective — that you’re gonna approach something like that —

RUSH:  That’s right.  And my effort has been to try to explain to them why Trump is immune from this traditional way of analyzing the fates and fortunes of candidates.  You even had the guy — and he was a nice guy.  He was just frustrated, the guy who called yesterday.  He was upset that — and he’s not a political professional. He’s a voter. He thinks that Trump should pay a price for the flip-flopping because he misled you, he misled all the supporters — and he was mad at me for helping Trump mislead you.

And my realization all along has been that you support Trump for primarily one reason, and there are branches that come off of this one tree here, but the primary reason that Trump is supported… It’s tough to nail one, because there are actually many. But the primary thing is he’s not one of “them.” He is a genuine outsider.  He’s not a Washington politician claiming to be an outsider.  He really is.

And he’s genuine enough to confirm that at each and every appearance, each and every time he’s on television.  So he’s not gonna be held to the standard that other politicians are held to by people like that, because you trust that the big picture that Donald Trump is gonna “make America great again.” He’s gonna reorder things in such a way —

As long as it’s not one of those, there’s gonna be tolerance and acceptance.  But, meanwhile, the political professionals are all analyzing this like gamblers analyze the point spread of a football game, looking at the injury report. They get down deep in here and what this means, and every poll is analyzed like it’s the last poll and what does it mean.  And none of that matters to a Trump supporter.

This, I have instinctively known since day one.  Now all of these wizards of smart… Well, look, I have take a break.  But, Sheryl, I appreciate the call.  You’re very articulate.  If you never get back in again, you can always count on the fact you did a bang-up job here.  You made the most of your one chance, although I think you’ll probably get back.  The odds are in favor of it.

RUSH:  Here is Joel in Newark, Delaware.  Great to have you on the program.  You’re up, sir.  How are you?

CALLER:  Mega dittos, Rush, from The First State of Delaware.

RUSH:  Thank you very much.  Great to have you here.

RUSH:  Well, yes.  But let me ask you a pointed question about that.  There’s got to be a better way.  Hang on just a minute, Joel.  Let me ask you a question.  How in the world could you and I, as private citizens, have anything that a foreign government would want to buy from us?

CALLER:  Well, it could be — suppose you were a corporation selling whatever.

RUSH:  Oh, okay.  Okay.  I thought you meant you and me just as average citizens walking down the street coming out of Walmart.

CALLER:  But, I mean, it’s just the same thing as — well, lo and behold, we got enough of them in this country, your average drug dealer, okay?  They make millions of dollars in profit, ship the money overseas to be laundered, and it comes back clean.

RUSH:  No, folks, he’s exactly right.  If any of us or if any CEO had endeavored to sell access to the corporation on a pay-for-play basis like Hillary was doing as secretary of state, you’d be on a long walk.  There’s no question about that.