RUSH: Mark in Springfield, Missouri.  You’re up first today.  Great to have you on the EIB Network.  Hello.

CALLER:  Thank you for taking my call.

CALLER:  My question — or my statement more or less — is my honest opinion that this current election is a garbage election.  I think Hillary Clinton deserves the jail cell, and I think Trump deserves a padded one.

RUSH:  So what do you attribute this to?  I mean, how did these two end up being the nominees of their parties? 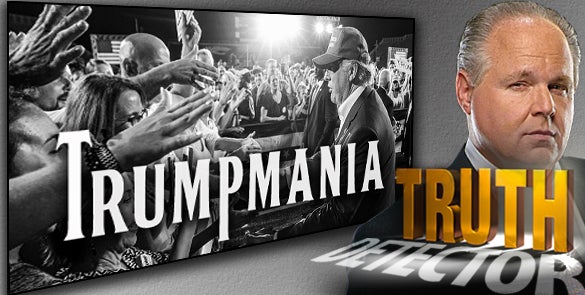 CALLER:  I think Clinton has the political machine behind her — that fact is in no doubt — and has no problem engaging in controversies when it comes to accepting millions of dollars in campaign donations —

CALLER:  I think the idea initially was that, yeah, he’s an outsider. He doesn’t have the political clout. But that exactly actually speaks to a point that bothers me on the Republican side, and that is that many of the talking heads opposed Obama (saying?) by being a community organizer, he had no experience for the job. Despite being a senator and having a law degree and teaching law, he was not anything but a community organizer, absent the prerequisite requirements and experience to be president.  Now, those exact same requirements are now thrown to the side when Trump goes for office because he doesn’t have political experience. None whatsoever! He has no law degree. Never taught it.

CALLER:  But somehow the very requirement, the very prerequisites that existed for Obama can now be overlooked.  Hypocritically in my opinion. 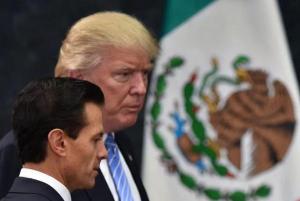 Trump’s a celebrity.  You think Anthony Weiner’s through?  He’s not through.  He’s a celebrity.  He’ll be back.  Mark my words.  He’s a celebrity.  We are, at this point in time in the evolution of our culture, immersed in a celebrity consciousness. I’m not quite nailing it here ’cause it sounds like I’m cheapening things, and maybe it is in a way.  But there’s a reason.  I played golf with a bunch of different guys over the weekend. That’s what I did, and every one of them — I mean, they all — desperately want Trump to win ’cause they just…

Even when they want him to win, they can’t believe it. One of them thought Kasich was the down home, total best candidate we had. So why didn’t he win?  Why? If this is the best Republican field we’ve ever had or in 20 years or 30 years, why didn’t one of them win? Like Jeb Bush with $115 million, he’s got three delegates to show for it!  Why didn’t any of those…? Why weren’t any of those people ever able to make a serious run at Trump?  By the way, not one of them blamed me, interestingly.

RUSH: Now, look, folks, I say things that if I’m not careful, if I don’t go back and put them in context people will think I’m either changing my mind or saying something I’ve never said before.  And we had a caller in the last hour who said this election is an embarrassment. Hillary needs to be in jail and Trump needs to in a padded cell.  That’s his impression.  We’ve got the lowest of the low. We found the absolute two worst candidates we could possibly find. He was wringing his hands, what does it say about our culture, our country, and so forth.

And I was mentioning to him because the subject came out when I was — (interruption) where did I play?  I played Bel Air Country Club.  Yeah, I went to California.  Some of my best friends in the world are in California, and I went to California.  The weather was great, man, 75 for a high.  Ho-ho-ho.  So played Bel Air couple times, played Sherwood Country Club out in the Thousand Oaks area. Everybody was just fabulous there at both places.  Great membership at both places.

But the subject came up, “Okay, how is it that Trump did this?  I mean, there were 15 candidates on the Republican side, and you had any number of conservative commentators –” In fact, when Trump came along and after the first two or three weeks when they started to have to take him seriously, they started wringing their hands, “Oh, my God, this is the best field we’ve ever had. This is the best field of potential presidents, potential nominees that we’ve had and this Trump guy’s coming along and blowing it to smithereens.”

If people hear that and are not comfortable, not familiar with other things I’ve said about this, and that’s all they hear, then they’ll get the wrong idea.  So I’ve gotta retrace my steps.  I don’t doubt, and I don’t mean to take that back, we do live in a celebrity-dominated culture.  We live in a culture where everybody wants fame, everybody rewards fame.  Kaepernick, I mean, it doesn’t matter what you do.  And it seems the more of a reprobate you are the bigger celebrity you are and the more fame you’ll acquire, the more curious people are.  There’s no shame anymore.  There really isn’t any public ridicule or shame.  Not lasting, anyway.

But I don’t want to disparage what Trump’s done with that.  I think celebrity is a factor.  But there are clear substantive reasons why Trump beat all these people.  And there are two.  There are two reasons.  And one of them is a topic, one of them is immigration, pure and simple.  Republican voters have been lied to or misled by others in the party about immigration for years and then there was the outside versus insider thing, and Trump was, without question in people’s minds, an outsider.

The fatigue and anger that people have with Washington regulars had boiled over.  People just weren’t into it anymore for a host-of-reasons.  So call it the perfect storm or what have you.  Scott Walker, Bobby Jindal.  I mean, all of these names.  And then of course all of them were dividing the anti-Trump vote so you have to throw that in as a factor as well.  And these postmortems, whatever happens here, whether Trump wins or loses, there are gonna be postmortems, and I guarantee you the people who are most to blame, if you want to talk about blame, are gonna try to point fingers elsewhere for what went wrong.  In fact, that’s already begun now.

But by saying that there is a celebrity factor, I’m not demeaning the substance of the campaign, either, and the substance of the people supporting Trump, because there is.  I think it’s another thing that has the Never Trumpers perplexed, confused, or angry because some of them do understand it, that it is substance, that it is not just celebrity. It’s not just things that they can’t achieve themselves or — some of them are not celebrities, are never gonna qualify as being celebrities, so they would love to the chalk it up to that so that their substance can’t be explained as the reason why they lost, but it is, in many ways. 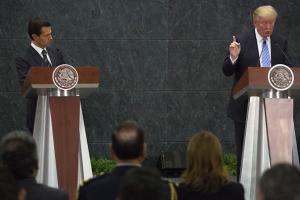 Anyway, there’s a whole bunch of reasons for this.  And, you know, assigning each of them a percentage as to how important they are as factors would be a difficult thing to do.  Outsiders big, immigration and the position Trump had on it is big.  Trade issues, you know, they kind of go with immigration, but there’d be a third leg there of this.  Those are the three primary things.  And none of the others were genuine outsiders.

Some of them tried to make themselves out to be, but they weren’t.  And some of them had baggage to carry on immigration that they were not able to shed.  At any rate, there are still people who think that regardless of the reasons you give them for these two nominees that we nevertheless are scraping the bottom of the barrel, that there has to be somebody better on our side. There has to be somebody better. There have to be more statesman-like people out there, have to be more qualified people out there.  There may be.  Why aren’t they interested?

Anyway, we gonna save this for another day when there is more reason to discuss — I don’t want to join the crowd of the blame game now.  It’s too early for that.  There’s still a task at hand, and I want to keep moving forward here.

RUSH: Lisa in Charleston, South Carolina.  Great to have you.  Hi.

CALLER:  Hi.  Hi, Rush.  Thanks for taking my call.  I’m gonna make it real quick, since my battery is about to go here. But your comment earlier about the celebrity of Donald Trump.  I just wanted to make the point that I actually think it’s the reverse.  I think that he has succeeded in spite of his celebrity, not because of it.  So I feel like that he really spoke to conservatives for him to be able to overcome just being known as a celebrity and be taken seriously.  Because conservatives generally shy away from the celebrity culture.  They don’t like celebrity.  So he had to prove himself to be taken seriously rather than people be impressed by his celebrity.

RUSH:  Wait a minute.  You’ve got a good point.  You have a great point there, but I need to ask: What do you mean, conservatives shy away, don’t like celebrity?  What do you mean by that?

CALLER:  Like when you see people… You see Hillary Clinton going with Justin Timberlake and Jennifer Aniston, or you hear Hollywood speaking their minds, and people don’t really care to hear it —

RUSH:  Wait.  What if Justin Timberlake were out there doing joint appearances with Trump? Do you think they’d like it?

RUSH:  You know where Bill Clinton was this weekend?

RUSH: He was not with Hillary when she was having her coughing spasm.

CALLER:  He was in Detroit marching.

RUSH: He was with Beyonce.

CALLER:  Oh, that’s right.  That’s right.  I heard that the Beyonce thing. To be quite honest, I think if Justin Timberlake came out, I don’t think that that would look good for Donald Trump.  I think that conservatives are not impressed with that.  I think he had to work harder —

CALLER:  — because of his celebrity. 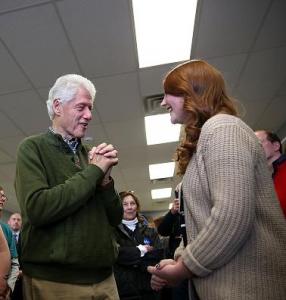 CALLER:  Well, I think it’s a false narrative to say that people like Paul Ryan speak for conservatives.  People are voting for Trump because he is the one, I think, espousing conservative values.  He wouldn’t fund the omnibus bill.  He’s strong on immigration.

CALLER: — who claims to speak for conservatives —

RUSH:  What brought up Paul Ryan?

CALLER:  I feel like Paul Ryan, um, is part of the establishment. They’re the ones who act like —

RUSH:  When did we get married?

CALLER:  — they’re the ones who gauge who’s a true conservative.

RUSH:  When did we get m…? What kind of device that you’re using that your battery is about to peter out on you.

CALLER:  But I’m not home to plug it in.

RUSH:  For crying out loud!

RUSH:  Well, I hope the thing doesn’t explode on you.

CALLER:  Well, it’s not a Samsung.  I just thought it was the Samsungs that were exploding, so… (laughing) But my —